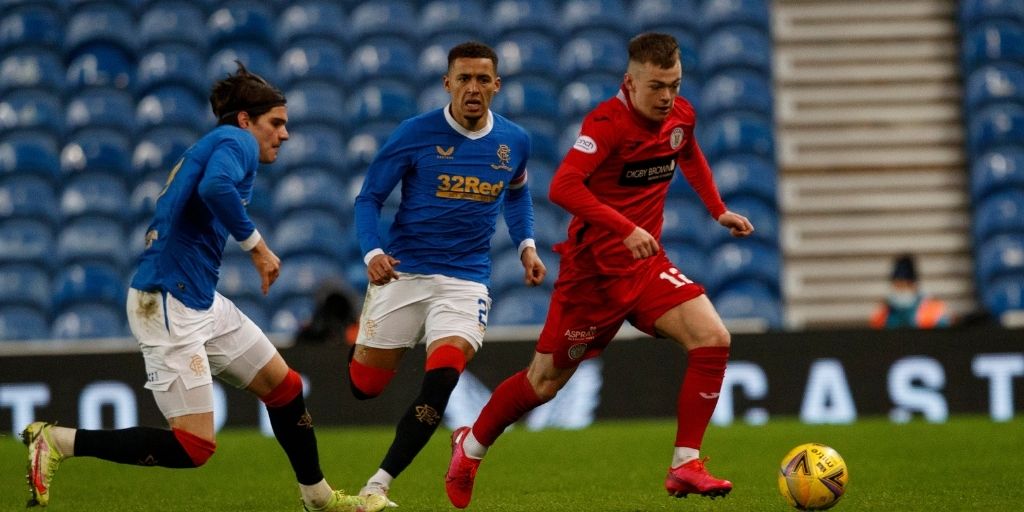 Buddies beaten in final game of 2021

St Mirren were defeated in the final game of 2021 as the Buddies lost 2-0 to Rangers at Ibrox.

Scott Wright and Alfredo Morelos scored in the first-half to give the league leaders all three points as we head into the winter break.

Jim Goodwin was able to welcome Jak Alnwick, Ryan Flynn, Alan Power, Ethan Erhahon and Jamie McGrath back into the squad after missing the midweek draw with Celtic.

But Rangers dominated early with Ianis' Hagi's strike deflected on the edge of the area an Alnwick was brave to gather the spinning ball ahead of Morelos. The Colombian striker headed over from close range six minutes later after getting on the end of a Borna Barisic cross from the left.

Rangers early pressure told with the Ibrox side taking the lead on 14 minutes when Wright headed home following James Tavernier's corner. Alnwick got a hand on it but could only claw away after the ball had crossed the line.

Tavernier almost turned from provider to goalscorer on 20 minutes when his deflected strike went inches by the post on 20 minutes.

Saints had a good opportunity on 24 minutes when Curtis Main was fouled by Connor Goldson on the edge of the Rangers box with the Light Blues defender going into the book for his challenge. McGrath stepped up to take for the Buddies but had his effort blocked by the defensive wall.

Rangers doubled their advantage three minutes later when Morelos slammed home from close range. The striker had seen his header well saved by Alnwick, but he was the quickest on the follow-up to put the home side 2-0 in front.

The Saints goalkeeper was forced into another powerful stop from Morelos with less than 10 minutes of the half remaining as Rangers continued their pressure. It was the first of two saves in a minute for Alnwick with the stopper down to save from Joe Aribo 60 seconds later. Morelos almost scored his second when he headed Ryan Kent's cross just wide as the first-half drew to a close.

Saints won their first corner of the match early in the second-half but couldn't make use of the rare opportunity. Tanser's ball in was headed clear and Rangers went on the counter with skipper Joe Shaughnessy booked for pulling back Wright. Barisic stepped up to take the resultant free-kick and curled into the side-netting.

The home side almost added a third just after the hour mark when Wright cracked the post from inside the area before Barisic fired the follow-up over from the edge of the area. 10 minutes later Alnwick made a good save to push away a powerful Tavernier strike from 20 yards.

The game fizzled out with Rangers' two first-half goals enough to see them take the points.