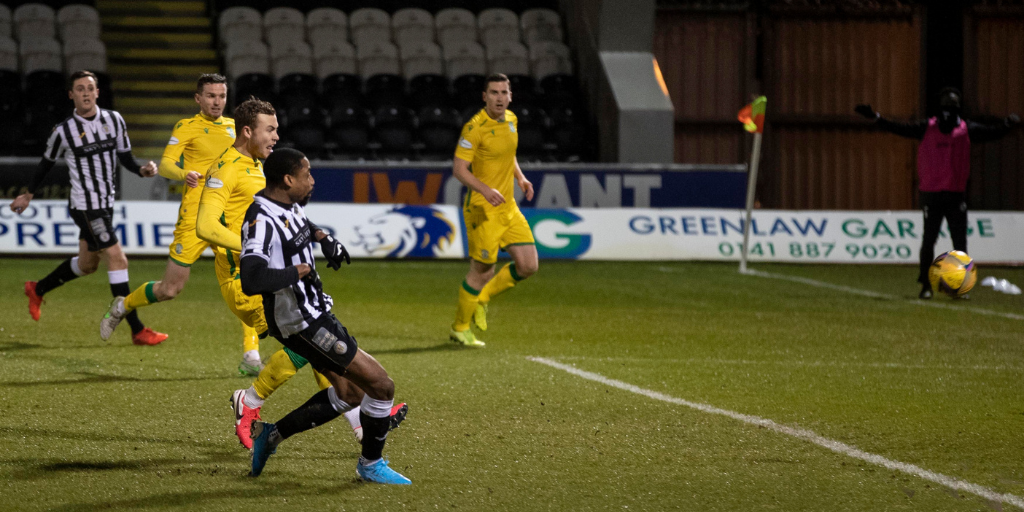 10 man St Mirren were edged out by Hibernian at the SMiSA Stadium this evening.

Despite a strong performance in the opening 30 minutes, a first-half red card for goalkeeper Jak Alnwick left Saints under pressure with Hibernian taking advantage of their extra man in the second-half.

Kristian Dennis, fresh from scoring two goals in his last two games, was proving a nuisance in the early stages. With 10 minutes on the clock the English forward flicked wide from 20 yards, before not being too far away six minutes later when he flashed another shot just by the right-hand post. The striker was then a whisker away from getting his toe on to Ryan Flynn's knock-on as St Mirren pressed for an opener.

But the Saints were dealt a major blow with nine minutes of the half remaining when Jak Alnwick was shown a straight red card. Jake Doyle-Hayes' loose back-pass was latched on to by Martin Boyle who raced through on goal. The Saints goalkeeper was out to try and avert the danger but brought the forward down 25 yards from goal. Referee Alan Muir showed no hesitation in pulling out the red card and in the stopper could probably have no complaints about the decision.

Dean Lyness entered the fray and was immediately tested by ex-Saint Paul McGinn with a drive from the edge of the box which the goalkeeper held well.

Both sides made a change at the break with Jon Obika replacing Ilkay Durmus and Ryan Porteous coming on for the visitors in place of Darren McGregor.

And within 10 minutes of his introduction, Porteous had put Hibernian ahead. The defender was up highest to bullet home a Boyle corner.

Hibs were having the bulk of the possession as they searched for a second. Lyness made a terrific save on 66 minutes to tip over a Christian Doidge header after the forward found space to get on to the end of a Boyle cross from the right.

With 20 minutes remaining the visitors were awarded a penalty kick when Jamie Murphy went down in the box under the challenge of Marcus Fraser. Boyle stepped forward and smashed down the middle to leave Saints with a mountain to climb.

But to the Buddies credit they never gave in and with just over 15 minutes remaining, Saints pulled a goal back to give them a lifeline heading into the final stretch. A quick counter saw substitute Dylan Connolly race clear of the Hibernian backline and pick out Jon Obika with a lovely ball across the face of goal allowing the striker to slam home.

The Buddies did press as they looked for a leveller but couldn't test Marciano as the visitors held on for the three points.