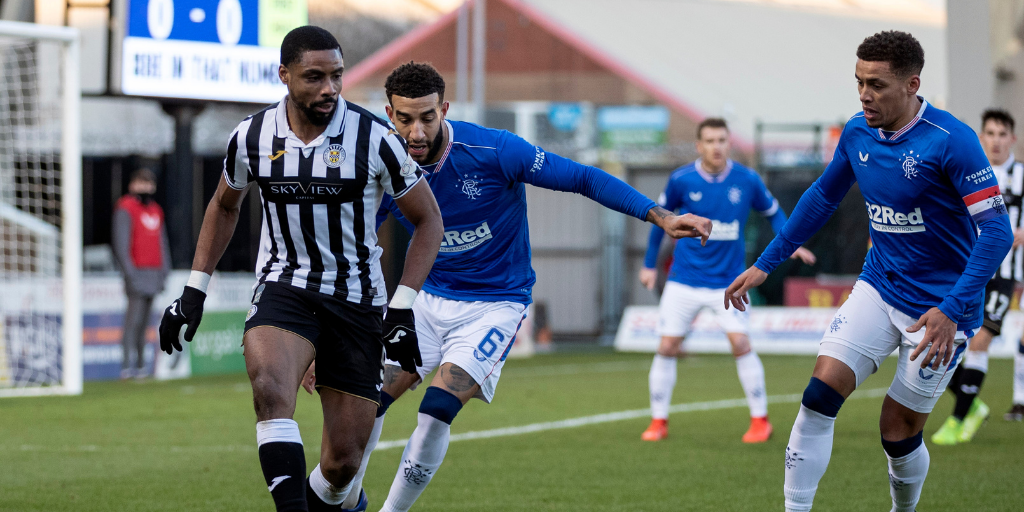 2020 ended on a disappointing note for Saints as they were beaten by Rangers at the SMiSA Stadium.

Saints had started well with Jamie McGrath having a go from range inside the first 15 seconds. The Irish midfielder pressed Steven Davis before robbing the experienced Rangers man of the ball before striking from 25 yards which Allan McGregor was down to gather.

Saints were looking good in the early stages and should have taken the lead on 12 minutes. Dylan Connolly broke into the box and shot at McGregor who couldn't hold the low drive after a deflection off the feet of Filip Helander. Jon Obika was quick on to the follow up, but fired wide under pressure.

It was Rangers who took the lead though when Kemar Roofe broke the deadlock on 27 minutes. Ianis Hagi stole the ball after Ethan Erhahon and Jake Doyle-Hayes collided around 30 yards from the Saints goal. The Romanian threaded the ball into the box where Roofe smashed home via the aid of a deflection off Conor McCarthy leaving Alnwick with no chance.

Saints fell further behind six minutes later after a mistake from Joe Shaughnessy allowed Alfredo Morelos to race clear and slam beyond Alnwick. It was a hugely frustrating couple of minutes for the Buddies who had more than been in the match in the opening exchanges.

Despite the setbacks, St Mirren started the second-half well with Obika testing McGregor from a tight angle on 49 minutes.

Connolly's pace was proving a threat for Saints and Borna Barisic made an important intervention to stop the Irishman going one-on-one with McGregor as the Buddies searched for a goal to give them some hope heading into the final 20 minutes.

Jim Goodwin made a number of changes in the final 15 minutes to try and spark Saints with Kristian Dennis, Ilkay Durmus, Kyle McAllister and Cammy MacPherson all entering the fray, but none of the players could make an impact as the game fizzled out in defeat.