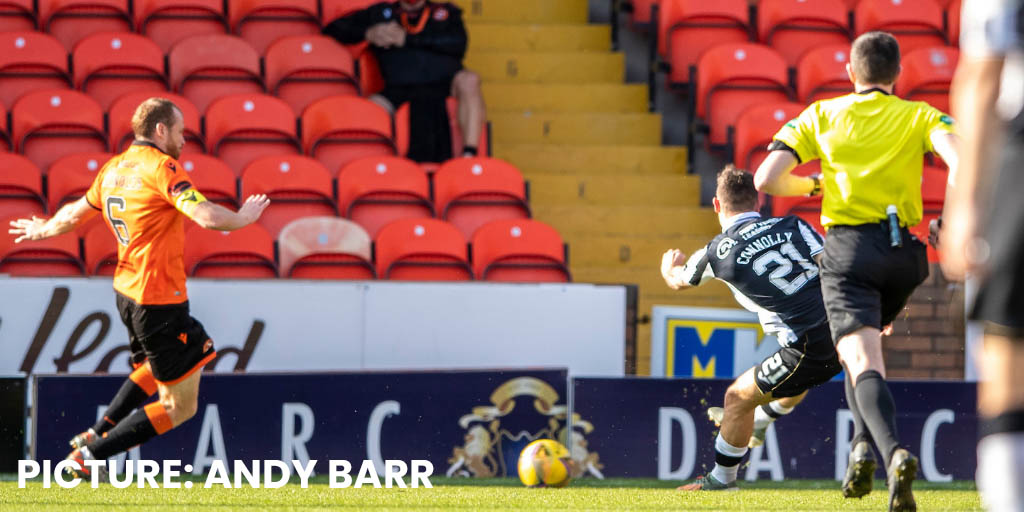 St Mirren were reduced to 10 men as they fell to a narrow loss away to Dundee United.

Lawrence Shankland and Adrian Sporle had United 2-0 in front before Richard Tait was shown a straight red card on the hour mark. Dylan Connolly netted his first St Mirren goal on 64 minutes but Saints couldn't find an equaliser that would have seen us take a point back to Paisley.

Jim Goodwin made two changes to the side that was edged out by Celtic on Wednesday night with Kyle McAllister and Jon Obika coming in for Connolly and Junior Morias.

And it was McAllister who went mightily close to opening the scoring in the opening minutes with the first real opportunity of the match. The winger had United goalkeeper Benjamin Siegrist at full stretch as his free-kick from 30 yards went inches wide.

The Buddies started brightly with Siegrist having to be alert to get in front of Lee Erwin to punch away a dangerous looking ball from McAllister on the right-hand side.

Erwin, who scored his first goal for Saints on Wednesday night, came close to putting the Buddies ahead on 17 minutes when managed to get himself in ahead of two Dundee United defenders to meet Obika's chested flick-on. But his touch from close-range was easily gathered by Siegrist.

It was the forward who was involved again in Saints next chance when he sliced wide after being met in space by a Conor McCarthy header on the half-hour mark.

But it was United who took the lead through a stunning strike from Lawrence Shankland. A corner from the left was headed clear by Conor McCarthy but only as far as Shankland who turned and volleyed home.

Both sides would have chances before the interval with Tait having a header well saved by Siegrist while Nicky Clark should have done better as he sent a strike wide from inside the Saints box.

United started the second-half the stronger of the two sides and could have doubled their lead on 51 minutes when Clark found himself in on goal but smacked his strike off the post.

However, United would find their second a minute later when Adrian Sporle took advantage of poor Saints defending. Ian Harkes initial effort was saved by Zdenek Zlamal with the Czech goalkeeper then making another block to deny Shankland, but the Buddies couldn't clear their lines which allowed United a third bite at it with Sporle finishing from close range.

Saints day looked to have gone from bad to worse when Richard Tait was given his marching orders on the hour mark for a challenge on Logan Chalmers. But just four minutes later the Buddies were given a route back into the match when substitute Dylan Connolly scored his first Saints goal after robbing Mark Reynolds inside the box and slotting beyond Siegrist.

Clearly boosted by the goal Saints had the bulk of the territory and possession in the following minutes. With 15 minutes remaining Ilkay Durmus will feel he could have done better when he met McCarthy's flick-on at the back post. The Turkish winger got his head on it but sent straight into the arms of Siegrist.

Zlamal would make a good save to deny Sporle a second with less than 10 minutes remaining as the game petered out with the points remaining in Dundee.