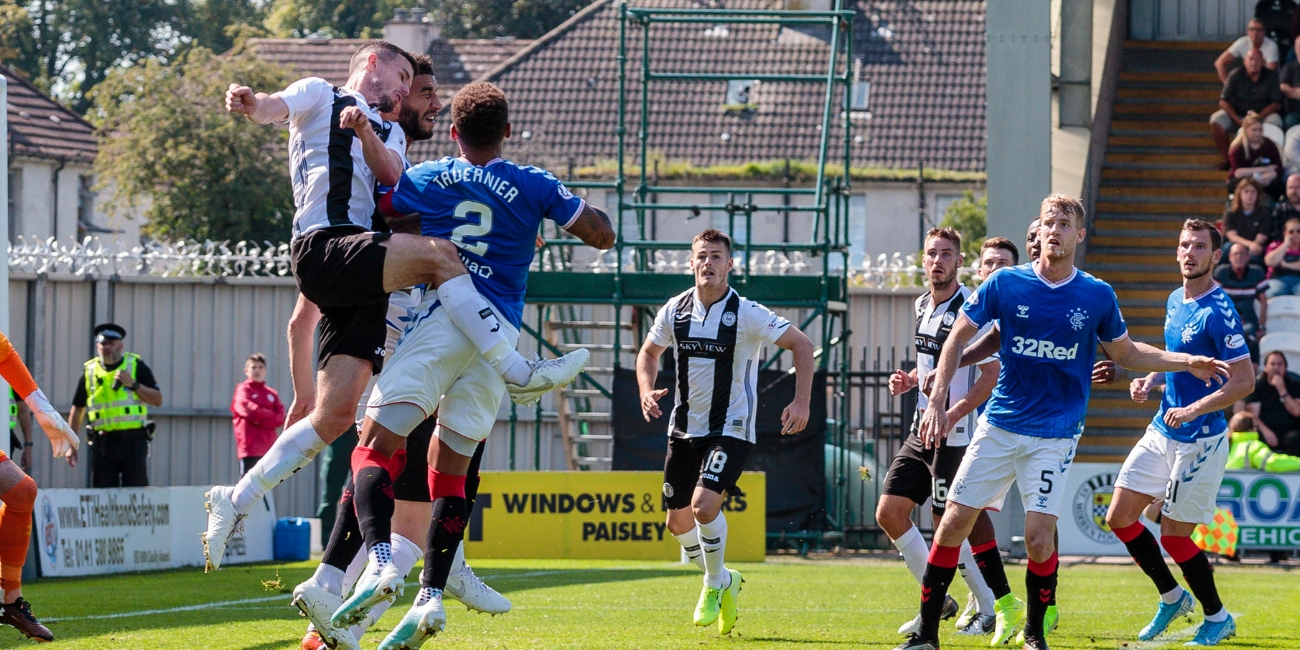 St Mirren suffered a narrow loss at home to Rangers on Sunday after a second-half free-kick from Borna Barisic gave the visitors a win over a well drilled Saints side.

The Buddies made life difficult for the Ibrox side and it took a moment of magic from Croatian defender Barisic to separate the side.

Jim Goodwin stuck with the same starting 11 that defeated Aberdeen two weeks previously. Ilkay Durmus' early strike against the Dons was all that separated the two sides that afternoon, but it was Rangers who could have struck early during Sunday's contest. Experienced forward Jermain Defoe beat the offside trap to find himself one-on-one with Vaclav Hladky but somehow stuck it wide from just a few yards out.

That early scare aside Saints started fairly well. Tony Andreu may have feel he could have done better on 10 minutes when he nipped in ahead of a Rangers midfielder to open up a bit of space but took the shot early and fired well over. Durmus

The closest either side came in the opening half hour was on 29 minutes when Jon Obika's cross-cum-shot had Allan McGregor beaten all ends up but cracked off the bar.  Two minutes after that chance, Ryan Jack's strike from the edge of the area for the visitors was deflected just by the post. A few minutes later, Hladky made a terrific instinctual save to deny Scott Arfield the opener.

Obika was adamant he should have had a penalty on 42 minutes when he went to ground under the challenge of Rangers defender Filip Helander. The striker looked to have outmuscled the Swedish defender who then hauled down Obika after clipping his own feet, but referee Kevin Clancy deemed that the forward had brought Helander down and awarded Rangers a free-kick.

The visitors started the second half strongly with Joe Aribo nodded just by the post inside the first minute from a James Tavernier corner before Hladky did well to deny Glen Kamara from a tight angle after the midfielder had been slipped in by Defoe. Hladky made another good stop to turn a Jack attempt round the post on 55 minutes.

Rangers pressure would pay off just before the hour mark as Barisic gave them the lead with a free-kick from 25 yards after Calum Waters fouled Defoe. It was a bit of a contentious decision with Saints believing Sam Foley had been fouled in the build up. Nonetheless, Rangers were awarded the set-piece and there was nothing Hladky could do to stop Croatian international Barisic's effort which was curled into the top right corner.

The game seemed to peter out in the final 30 minutes, but Saints did have chances with just five minutes remaining to haul themselves level. Paul McGinn headed over from a corner on 86 minutes, while debutant Junior Morias could have made it a dream first appearance for the Buddies when he was picked out inside the box by Kyle McAllister, only for the striker to flick into the arms of Rangers goalkeeper Allan McGregor from close range.