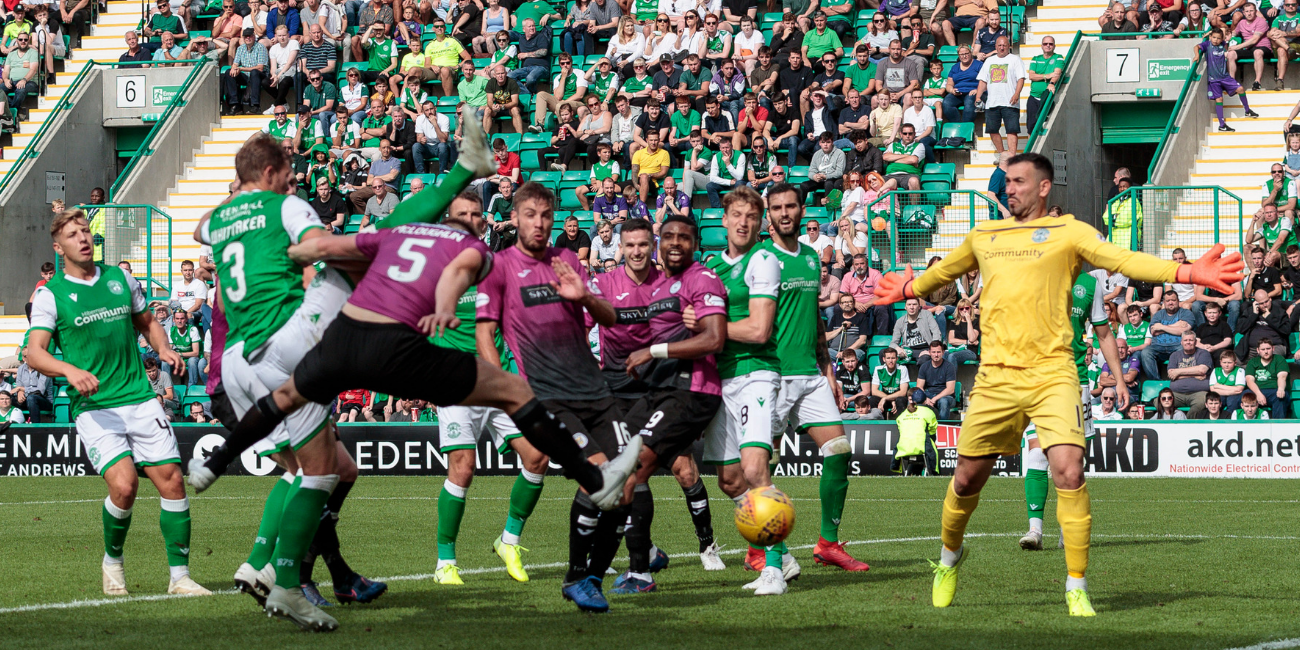 A late Scott Allan goal denied battling Buddies a point away to Hibernian on the opening day of the 2019/20 season.

Jim Goodwin's side had plenty of chances and looked worthy of a point before a piece of individual brilliance from Allan gave the Hibees all three points.

The manager gave starting debuts to Sean McLoughlin, Sam Foley and Ilkay Durmus - all of whom signed for Saints this week.

The Buddies started the contest brightly with Kyle Magennis, captain in the absence of Stephen McGinn, playing a nice ball across the box in the third minute where both Ilkay Durmus and Danny Mullen were waiting. But the pair ended up getting in each others way allowing Hibs to clear.

Stevie Mallan had the game's first shot on goal on five minutes. The ex-Saint was a whisker away from scoring the opener with his powerful effort from the edge of the area flying just over Vaclav Hladky's crossbar.

Debutant Durmus was looking lively for the Buddies down the left-hand side. A quick counter for Saints saw the Turkish winger bear down on goal but his cross-cum-shot was held by Ofir Marciano.

Sam Foley tried to catch the big Israeli goalkeeper out when Saints won possession deep in the Hibees half. The midfielder attempted to catch the goalkeeper off his line but couldn't connect with it properly making it easy for Marciano to gather.

The Buddies were having a good spell and could have been ahead on 27 minutes when Tony Andreu's lovely through ball found Paul McGinn through on goal. Steven Whittaker was quick to get across to block McGinn's attempt.

Four minutes later, Durmus forced Marciano into a wonderful stop with the goalkeeper getting a strong hand on the winger's vicious strike from the left.

Hibernian were still very much in the match and could have taken the lead on 34 minutes when Horgan's low ball into the box had Hladky's beaten and looked primed to meet Florian Kamberi who was ready to tap home. But Gary MacKenzie did well to get in-front to knock the ball wide.

Durmus had a terrific chance to open the scoring just a few minutes before half-time. The winger was found in space inside the box by Foley and took a touch to steady himself before smashing his effort over the bar. Durmus had his head in his hands afterwards realising how good an opportunity it was.

The home side looked to take charge of the game in the early part of the second half and thought they had taken the lead on 52 minutes. Scott Allan had Hladky beaten with his curling effort, but the shot cracked off the inside of the post. The Hibees kept coming and had the ball in the net seconds later only to be denied by the offside flag. Joe Newell's header came off the same post as Allan's shot and fell to Kamberi who touched home. The far side linesman's flag curtailed the celebrations though subsequent pictures showed that the Swiss forward was actually onside.

Saints were still creating chances with Andreu going close when received the ball from debutant Jonathan Obika 25 yards from goal. The Frenchman took it first time from on his left foot, drilling towards the top corner with Marciano clawing away to keep the score level.

With 10 minutes to go Sean McLoughlin had a great opportunity to put Saints in the lead when he ghosted in at the back post to meet Oan Djorkaeff's corner but nodded wide of the mark.

There was a scare for the Buddies when Stevie Mallan lined up a free-kick 25 yards from goal. St Mirren fans know what Mallan is capable of from that kind of range and having scored twice at Easter Road for Saints from free-kicks in the past there was the fear he was about to put his current side in front. The midfielder went for a low curling effort that was easy enough for Hladky to gather.

Hibernian would, however, take the lead just a minute later when Scott Allan danced his way into the St Mirren box and lashed beyond Hladky to break the deadlock.

Far from being down and out, Saints had two late chances to snatch an equaliser with Flynn heading wide from a MacPherson free-kick and debutant Obika flicking over the bar.

It wasn't to be on the opening day but Jim Goodwin will have taken plenty of encouragement from the performance of his players heading into next week's match against Aberdeen.