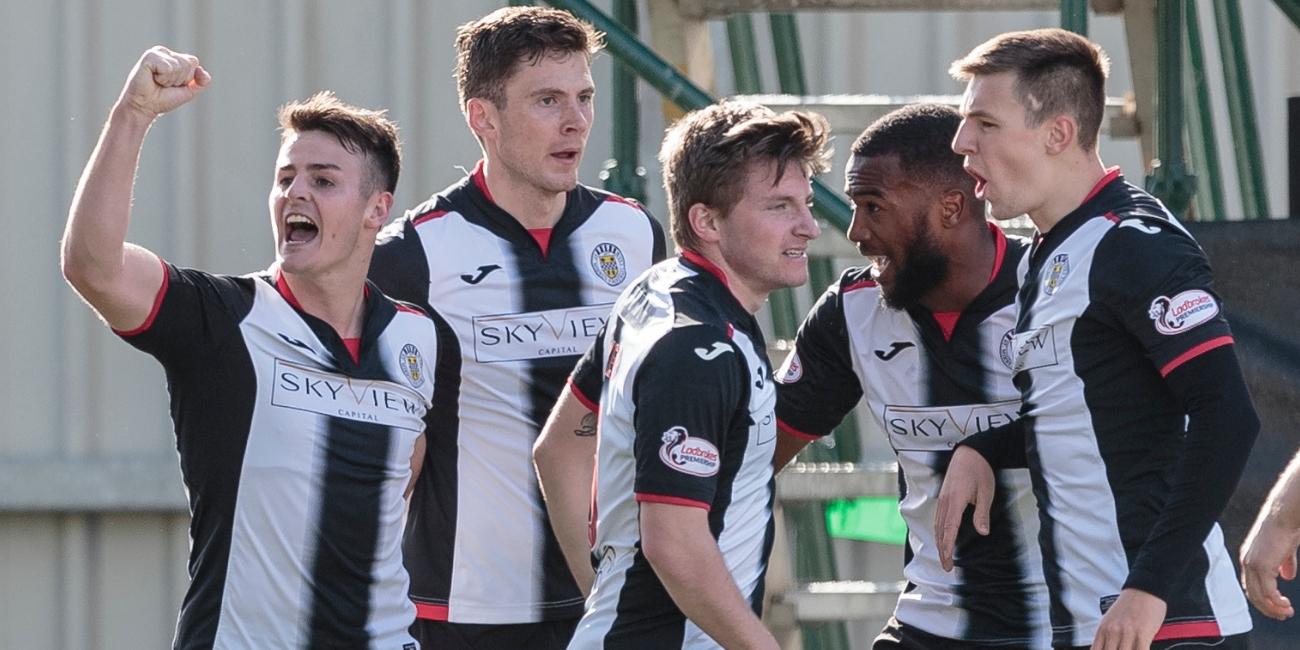 Some speccsy football saw Saints off the bottom of the Premiership as they defeated nearest rivals Dundee.

After 30 seconds such an outcome looked about as likely as Theresa May winning a parliamentary vote as the visitors charged into the lead, Ethan Robson scoring from John O'Sullivan's cross to the delight of the large travelling support.

It could have been two when Andrew Nelson shot wide before Saints equalised out of nothing, Danny Mullen getting just enough on Duckens Nazon's delivery to divert it past Seny Dieng.

The winner arrived just after the hour mark, Anders Dreyer nodding the ball back across goal for Brad Lyons to head home, the midfielder's celebrations giving him the chance to have the last laugh at those who had mocked his glasses when he arrived on loan from Blackburn.

Nazon, Mullen and Dreyer were back in the team at the expense of Simeon Jackson, Cammy MacPherson and Kyle McAllister. The other change was a surprise as Gary MacKenzie returned in place of the suspended Ethan Erhahon. It was the big defender's first game of the season – although you wouldn't have known from the quality of his performance.

However, his hopes of a clean sheet on his return were gone in 30 seconds. Dundee's initial attack was cleared back out as far as O'Sullivan and his fine low cross was swept home by Robson. It was a dream start for the visitors and it nearly got even better as Nelson Nelson danced through the Saints defence before firing narrowly wide.

A Saints equaliser was looking pretty unlikely – and yet that's what happened soon after. Dreyer looked to have held on to the ball for too long before he laid it off to Nazon, whose cross was clinically finished off by Mullen, the striker delighted to bag his first goal since his opening day double against the same opposition.

Although Saints were looking more settled, it was the visitors who were creating the better chances as Martin Woods dragged his shot wide before Vaclav Hladky rushed out to block Craig Curran's shot after he'd been played in by O'Sullivan. The on-loan Blackpool man was causing the Saints defence all sorts of problems and nearly caught out Hladky when his cross threatened to dip under his crossbar, the goalie palming it away for a corner.

There hadn't been much action at the other end but a few chances started to come Saints' way just before the break, Mullen's blushes being spared by the offside flag after he could only swing at Jack Baird's knock down. Nazon teed up Lyons from 20 yards but he failed to find the target before Dreyer saw his shot blocked as the visitors failed to deal with a free-kick.

Hladky did well to turn away a curling effort from Nelson early in the second half before Saints too the lead. Mihai Popescu found Dreyer with a tremendous ball into the box and the winger unselfishly headed it back across for the onrushing Lyons to nod past Dieng for his first Buddies goal.

He tried for his second with a long range free-kick that Dieng was always gathering and tested him again with 10 minutes left, the keeper doing well to parry his low drive into the air, Dreyer heading the rebound over. Dundee had offered little since falling behind and finally threatened with five minutes to go, Hladky comfortably saving Nelson's shot. The impressive Mullen was then replaced by Cody Cooke and he very nearly marked his arrival with a goal, seeing two attempts to force home a free-kick blocked by the Dundee defence.

Nerves were jangling as four minutes of stoppage time began, MacKenzie flinging himself in front of Nelson's fierce shot. The defending wasn't pretty or particularly organised, black and white shirts flying everywhere as players put their bodies on the line to block whatever was coming their way. However, it was effective as Hladky wasn't troubled and Saints saw the game out to pick up what could be a crucial three points.