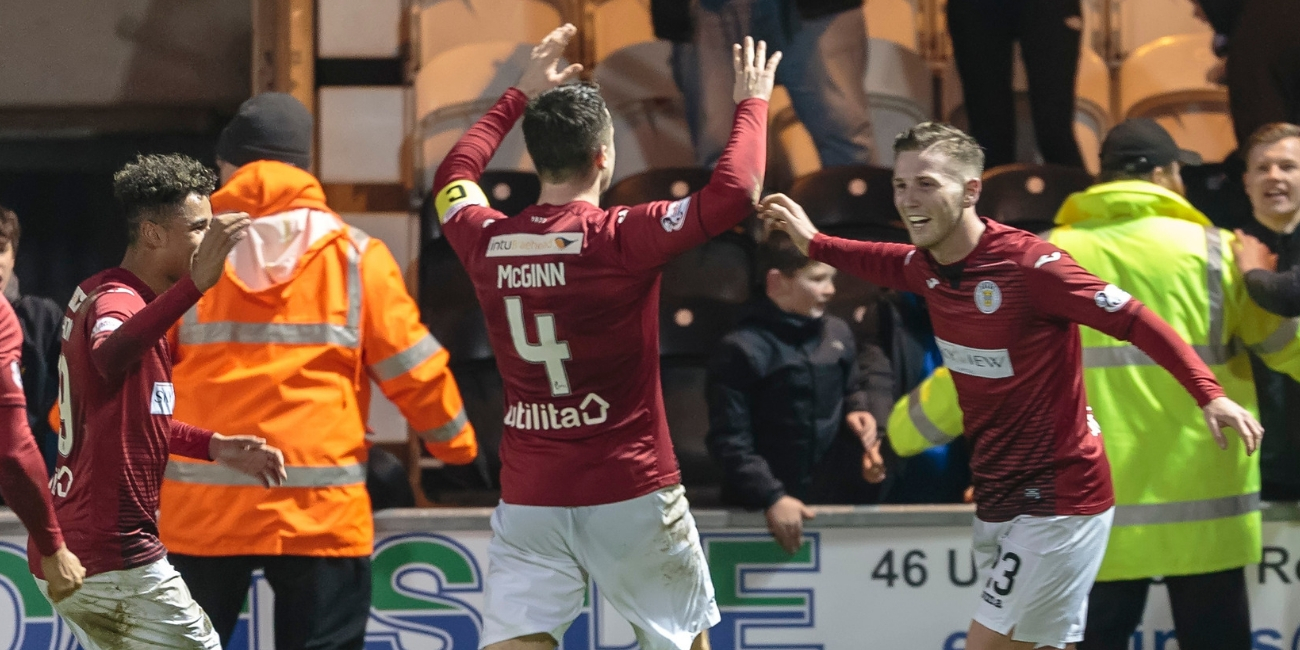 A dramatic 20 minute spell saw Saints produce a dramatic fightback to knock Alloa out of the Scottish Cup.

It looked as if Buddies legend Jim Goodwin would come back to haunt his old club as his current side charged into a 2-0 goal lead at the Break, Alan Trouten and Kevin Cawley scoring either side of new boy Brad Lyons being dismissed for simulation.

And there was little sign of a Saints comeback until midway through the second half, Simeon Jackson's shot proving too hot for keeper Neil Parry and the alert Cody Cooke pounced to force the loose ball home.

Five minutes from the end the Buddies drew level as Kyle McAllister and Stephen McGinn combined to set Ethan Erhahon up for the equaliser. Before anyone could start thinking of a replay McAllister struck again, the winger curling a tremendous shot past Parry to break the part-time side's hearts.

The on-loan Derby man would have to for his return to action as he started on the bench along with fellow loanee Jordan Holmes. Lyons was in from the start as were fellow new signings Vaclav Hladky, Mihai Popescu and Greg Tansey joining him in the team. A gentleman's agreement meant former Buddies skipper Jim Goodwin was unable to include ex Saint Jordan Kirkpatrick in his Alloa team but there was a start in midfield for Jon Robertson.

Hladky was tested early on when he turned Connor Shields' effort round the post. Stephen McGinn and Jackson both dragged shots wide as Saints began to threaten, Lyons unlucky to see his header hit the bar from Tansey's corner. Hladky was in action again as he did well to palm away Cawley's drive. The visitors went close again moments later as Shields' cross made it through to Trouten at the back post and when he failed to connect properly, Jack Baird tried to clear it – the ball hitting off of Dario Zanatta before bouncing inches past the post.

It was end-to-end stuff, Tansey's shot from Jackson's cutback being deflected behind and Baird's header from Stephen McGinn's cross being beaten away by keeper Parry. Alloa went back on the attack and silenced the home crowd when they took the lead, Liam Dick finding Trouten with a great pass and he side-footed into the bottom corner.

If that was bad, things were about to get a lot worse for the Buddies. Lyons had already been booked for a foul on Andy Graham and when he went down under a challenge from the defender, ref Don Robertson felt the on-loan Blackburn man had dived and showed him a second yellow. It seemed somewhat harsh and Saints found themselves with a huge mountain to climb. Alloa looked to take advantage of their numerical advantage immediately, Robertson's 20-yarder being straight at Hladky. A few minutes later Cawley did rather better, the ball breaking to him at the edge of the box and he thundered it into the top corner, Saints' new goalie having absolutely no chance.

The playing numbers could have been levelled up when Zanatta escaped with just a booking for an elbow on Baird, Saints boss Oran Kearney then deciding enough was enough as he replaced Ryan Flynn with Cooke in a bid to turn the tide. The Wasps were still looking for a third before the break as Cawley headed over from Steven Hetherington's free-kick.

The early signs of the second half weren't particularly encouraging for the hosts, Shields blazing over from a decent position. McAllister was handed his second debut at the expense of Tansey. It initially made little difference, although a frustrated Popescu did hit a shot a few yards wide, the defender then doing well to snuff out danger from Zanatta at the other end.

Saints had barely threatened but with a quarter of the game left they were handed had a lifeline. Jackson tried his luck from range and when Parry failed to hold his shot, the alert Cooke nipped in to tuck the ball away and bag his first Buddies goal.

Suddenly there seemed some belief that Saints could dig themselves out of their rather large hole, although in pushing for an equaliser they left themselves somewhat exposed on the break. Zanatta had a great chance to restore Alloa's two goal lead as he wrong-footed Baird before rattling the post, the defender perhaps wary of putting in a tackle and risking being shown a second yellow.

There had been little for the home fans to get excited about after Cooke's goal but that was about to change in a dramatic final few minutes. McAllister was able to slide a pass through for Stephen McGinn and he squared the ball across goal for Ethan Erhahon to thump high into the roof of the net for both the equaliser and his first senior goal.

A replay now loomed but Saints – and in particular their skipper and McAllister – weren't finished yet, the delights of a midweek trip to Clackmannanshire clearly not that appealing. The celebrations for the equaliser had barely stopped before the Buddies support were on their feet again as McAllister passed to McGinn, who returned the ball with a perfect backheel and the winger barely broke stride as he curled a wonderful shot beyond the despairing grasp of Parry to complete an incredible turnaround.

There was still a few minutes to see out but the Buddies needn't have worried. Alloa were broken – if not physically then at least mentally – and there was little danger of them bagging an equaliser. It was harsh on the Championship side but all Saints will care about is being in the fifth round draw.