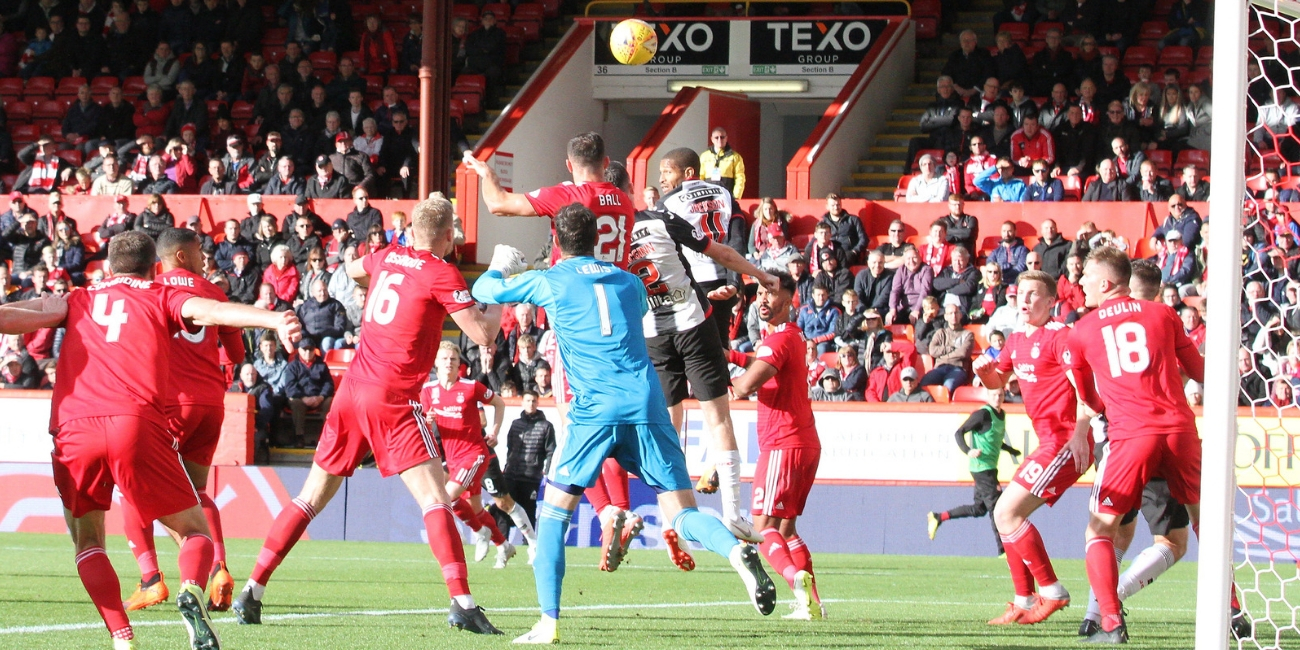 St Mirren fell to a 4-1 defeat at Pittodrie as three goals in 15 first half minutes helped Aberdeen on to three points in the Ladbrokes Premiership.

The Buddies began positively, restricting a lot of Aberdeen’s attacks. Saints, who had conceded in the opening 20 minutes of their two previous trips to Aberdeen, contained the Dons well in the opening stages and threatened with the first real chance on nine minutes. Stephen McGinn won the ball deep in the Aberdeen half and fed it through to

The Dons were growing into the game and looking more threatening as the game wore on with Gary Mackay-Steven and Shay Logan causing problems down the right-hand side.

It was Mackay-Steven who nearly put the hosts ahead after 20 minutes. He cut inside the box curved a shot just wide of the Saints' goal.

But The Dons made the breakthrough on 26 minutes when Shay Logan whipped in a cross just outside the box. As it dipped towards the six yard box, a diving Sam Cosgrove connected and headed the ball past the hand of Craig Samson.

It was a similar story for Saints from the previous trip to Pittodrie as the side never seemed to recover from the goal. Only four minutes later Abderdeen doubled their lead. Graeme Shinnie rolled the ball back to Logan, who hit the ball first time towards the edge of the box where it was met by Connor McLennan. As he slipped he smashed the ball into the top left-hand corner of the net.

Simeon Jackson was lively for Saints and still trying to make something happen going forward. He turned two defenders just past the halfway line and sent a ball through to Ryan Edwards, but the Australian's shot went wide of the target.

Just as the Saints were beginning to settle again Aberdeen found a third goal. The hosts were working the ball around the Saints box until Mackay-Steven took a shot at the edge of the area. His effort deflected off a defender and found its way to an unmarked Max Lowe. With all the time in the world, Lowe took a touch for control before dispatching the shot to make it 3-0.

Saints looked more solid at the start of the second half and tried to find a way back into the match. And it nearly came on 50 minutes. Jackson again was involved and almost got his first goal for the club in bizarre fashion. The striker chased down a pass back to Aberdeen goalkeeper Joe Lewis. As Lewis tried to clear the ball it cannoned off Jackson and looped over the goalkeeper, forcing him into a diving save to claw it away. Then Jackson sent the rebound crashing into the side netting.

Aberdeen put the final nail in the coffin just after the hour mark. Max Lowe ran down the left wing and went through McGinn as he squared the ball to Sam Cosgrove, whose shot was palmed onto the post but still crept in over the line to make it 4-0 to the hosts.

St Mirren would get a consolation goal with just under 15 minutes remaining. Substitute Cammy Smith intercepted a loose pass from Lowe and as he ran towards the Aberdeen box he played through to Jackson who calmly chipped over Joe Lewis for his first goal with St Mirren. It didn’t mean much in the terms of the contest, but allowed the Canadian to get off the mark for Saints after a lively start to his Buddies career.