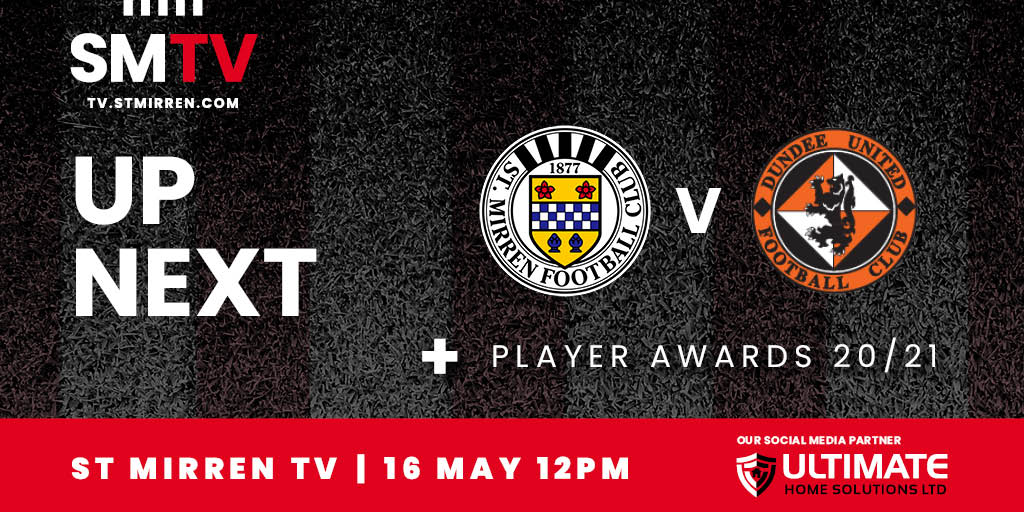 Up Next: St Mirren v Dundee United (16th May)

The 2020/21 season draws to a close on Sunday as St Mirren host Dundee United at the SMiSA Stadium.

It's been a season of progress for Saints who narrowly missed out on a top finish and reached two national cup semi-finals for the first time since 1981/82.

Jim Goodwin's side are looking to end the season with their highest ever finish in the current league setup. For Saints to achieve that and finish seventh they would have to beat Dundee United and hope Motherwell fail to win at home to Ross County. The Buddies could also finish in seventh if they draw with United and Motherwell lose.

Dundee United could also finish seventh in their first season back in the Scottish Premiership. The Arabs currently sit a point behind Saints and would have to win on Sunday and hope Motherwell lose against Ross County.

Both sides come into the match on the back of draws on Wednesday night. Saints completed a comeback at Rugby Park to draw 3-3 with Kilmarnock, while Dundee United were held to a 2-2 draw at home to Motherwell.

The St Mirren Player of the Year 2020/21 awards sponsored by Walker Laird will take place following the conclusion of the match.

Season ticket holders and international subscribers can watch the match and awards live on tv.stmirren.com.

Non-season ticket holders can watch Sunday's match and awards live on PPV for £12.50.

The two sides have met three times this season with each side boasting a win.

Saints defeated United 5-1 at Tannadice in January, while the only meeting at the SMiSA Stadium this season ended in a 0-0 draw back in November.

United's win came in September as they edged out 10 man St Mirren 2-1 at Tannadice.

Euan Anderson is the referee on Sunday. The linesmen are Daniel McFarlane and John McCrossan, while John Beaton is the fourth official.