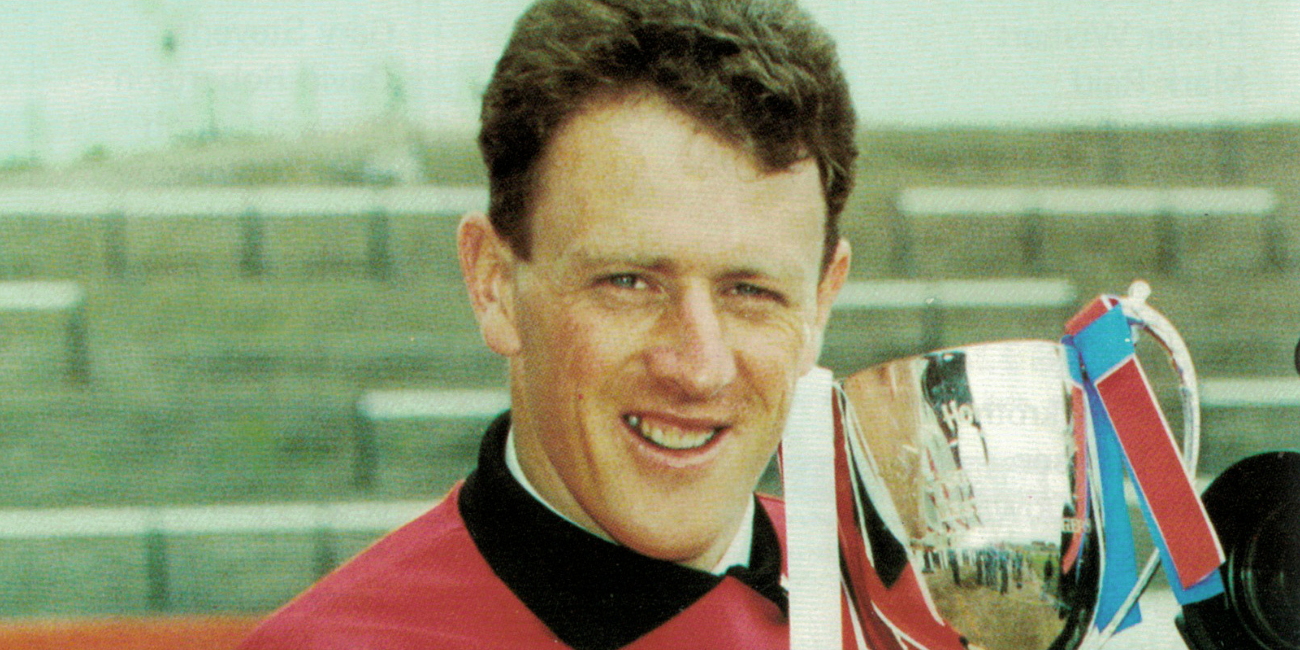 Campbell Money was born in Ayrshire on 31st October 1960. After school, he joined the police cadets whilst playing football with Dailly Amateurs.

In June 1978, Saints offered him a contract and he had to decide between football and the police. In the end, football won, and it would appear to have been the correct decision.

Campbell's debut was a friendly against Southampton on 1st August 1978. The keeper played well, earning Saints a 1-0 victory with some fine saves. His competitive debut was the following Saturday in the Anglo-Scottish Cup. Unfortunately, despite another fine performance, Motherwell won 1-0.

He quickly earned the nickname 'Dibble' after 'Officer Dibble' in the cartoon, 'Top Cat', after Jimmy Bone saw him arriving for a reserve match in full cadet uniform. Over the next three seasons, first team opportunities were limited due to the performances of Billy Thomson, making just one appearance each year. March 1983 saw his first senior shut-out in a 0-0 draw with Motherwell.

Towards the end of season 1983/84, Thomson was in dispute with the club and was dropped. Campbell grabbed his chance, playing the last five matches of the season. During the summer, Thomson left, leaving Campbell as Number One.

The 1984/85 season was an eventful one for Campbell. Starting as first choice, he kept six clean sheets in the opening 12 matches. In mid-October he was hospitalised with appendicitis, which side-lined him for several weeks. He returned for a match at Celtic Park at the end of November. This was not a happy occasion as Celtic won 7-1!

In January, a Scottish Cup match against Dundee United at Love Street, saw Money leave the field for ten minutes to have a facial injury stitched after colliding with a United forward. In all he played 35 matches, keeping 14 clean sheets.

The following season, the Scottish Cup again saw him carried off after 15 minutes against Hearts at Tynecastle, with another head injury. This time he was unable to return, and Saints lost 4-1 with defender Neil Cooper in goals.

The season had started well for Campbell, making his European debut against Slavia Prague on 17th September. A narrow 1-0 defeat in Prague was followed by one of the greatest nights in the club’s history when Campbell kept a clean sheet, in a 3-0 win. Sadly, Saints fell in the next round to Hammarby of Sweden.

His performances earned an international call up and a place in the provisional squad for the 1986 World Cup. He was in line for his first cap against The Netherlands on 26th April, but an injury against Dundee United three days earlier, ruled him out and cost him his trip to Mexico.

Season 1986/87 was one of the best of Campbell’s career. He kept 11 clean sheets in 42 league matches, earning a first Scotland Under-21 cap against the Republic of Ireland, as an over-age player. The Scottish Cup saw Saints defeat Caledonian, Morton, Raith Rovers and Hearts, as they reached the final against Dundee United on 16th May. In a poor game, Campbell kept a clean sheet as Saints won 1-0.

The day after the final, Saints flew to Singapore for a four-team tournament. They reached the final and faced Mexicans, Universidad Autonoma. The match ended 0-0. In the penalty shoot-out, Campbell took one of the penalties and scored, as Saints claimed the trophy.

The following season saw Saints in European action again and Campbell played all four matches as Saints defeated Tromso of Norway before losing to eventual winners Mechelen in the second round. He gained a further Under-21 cap against Belgium in October 1987.

Consistent performances over the season saw 15 clean sheets from 46 matches and earned Campbell a place in the national squad for the Rous Cup matches in May 1988, unfortunately he never got off the bench.

Over the next four seasons, Campbell played in 114 matches, keeping 30 clean sheets, earning another Under-21 cap versus Norway in September 1988 and a 'B' cap against Yugoslavia in March 1990.

In August 1990, he finally played for the full national team against a Scottish League select, in the League Centenary match. However, this was deemed unofficial by the SFA.

At the start of season 1991/92 Campbell was awarded a testimonial match for his services to the club, and Saints lined up against Rangers on 6th August. In an entertaining match, Saints lost 3-2.

When the competitive matches started, Saints drew 3-3 with Brechin City in the League Cup, leading to a penalty shootout. Campbell re-lived his Singapore heroics, scoring from the spot to help Saints win 5-4. The league campaign saw 6 clean sheets from 27 starts, but the season was not a good one and Saints were relegated to the First Division.

Life in the lower league got off to the worst possible start, conceding seven goals in the opening match against Raith Rovers. Things did improve though with seven clean sheets in the following eight matches. On 2nd December Saints faced Cowdenbeath in a league match at Love Street. With the score at 0-0 just before half-time, Saints were awarded a penalty. With his shoot-out goals fresh in mind, Campbell stepped up to open the scoring, in a 5-0 win. He repeated his penalty feat against Clydebank on Boxing Day in a 3-2 win, making him the top scoring goalkeeper in Saints' history. Unfortunately, a broken leg against Morton seven days later ended his season.

During 1993 Campbell, along with Kenny McDowall, was given a coaching role at the club. This, added to the signing of Alan Combe, meant that he played irregularly through season 1993/94. He did play in the final of the B&Q Challenge Cup final against Falkirk on 12th December. Unfortunately, Saints lost 3-0.

Over the next two seasons he shared the goalkeeping position with Combe, registering five shut-outs in 28 games. On 2nd March 1996 he lined up against Hamilton at Love Street in what was to be his final Saints match. Shortly after this he left to become Stranraer's first full-time manager, guiding them to the Challenge Cup in 1996/97 and the Second Division Title in 1997/98.

In his time at Love Street Campbell played 391 matches, keeping 107 clean sheets and scoring those two penalties. Always a fans' favourite, he will be remembered as a reliable and brave keeper who served the club well.

This article first appeared in the St Mirren matchday programme on 6th January 2018 for the match against Inverness Caledonian Thistle.