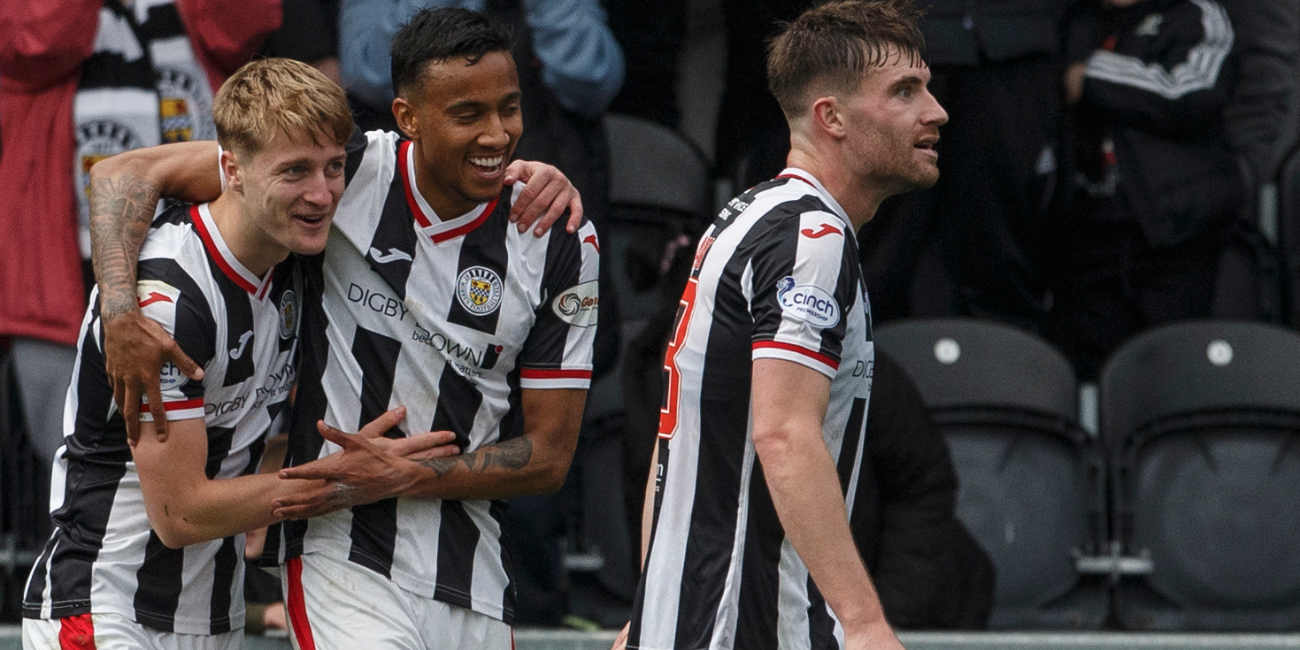 Super sub Alex Greive did it again as Saints completed a league double over Dundee United.

The Kiwi had come off the bench to bag a late winner against Livingston earlier this month and repeated the trick again with a wonderful glancing header from a tremendous Ethan Erhahon cross with less than 10 minute left.

That capped off a dramatic afternoon in Paisley which had seen Saints take the lead just before the break when Curtis Main's header found the net via a combination of the post and United goalie Carljohan Eriksson.

United drew level in the second half after Tony Watt set-up sub Steven Fletcher but it looked as if the Buddies had restored their advantage when Jonah Ayunga finished off a well worked move. A week ago it would have counted, but since then VAR has arrived and it was duly ruled out after Keanu Baccus was deemed to have fouled Aziz Behich in the build-up.

No matter, that just paved the way for Greive to come off the bench to grab a late goal against United - just as he'd done at Tannadice back in August – as Saints moved up to joint third in the Premiership table.

There were two changes to the Saints side that had drawn a blank with Kilmarnock, Alex Gogic and Richard Tait coming in for absent duo of Declan Gallagher and Scott Tanser. Former Buddies Jamie McGrath and Liam Smith started for the visitors, who handed a start to recent arrival Arnaud Djoum.

Tait was close to giving United an early lead when he diverted McGrath's free-kick towards his own goal, Trevor Carson reacting brilliantly to spare his team-mate's blushes. Jonah Ayunga then had an effort deflected behind for a corner, Ethan Erhahon's delivery finding Charles Dunne who crashed a header off the bar. Ryan Strain had the ball in the net after a quarter of an hour following good work from Mark O'Hara, however the whistle had already gone for shenanigans in the box – although it looked more like Ayunga and Curtis Main had got in each other's way rather than a United player having been fouled.

Main was presented with a chance when United goalie Carljohan Eriksson mis-hit a clearance straight to him, however it was still going to take something special for him to find the net from 30 yards and he dragged his shot off-target. Ayunga hit the side netting after being slid in by Keanu Baccus before the game died a death for the best part of 20 minutes. Perhaps that's what motivated Carson to try to spice things up as he charged miles from his goal and found himself in no-man's land, Tony Watt lifting the ball over the stranded keeper but thankfully also past the post.

That moment seemed to spark the game back into life as a minute or so later Saints took in the lead. Erahon's crossfield pass found Tait on the left and he switched the ball onto his right foot before delivering a cross for Main. The big striker headed it towards goal, the ball hitting the post then the back of Eriksson before nestling in the bottom corner. 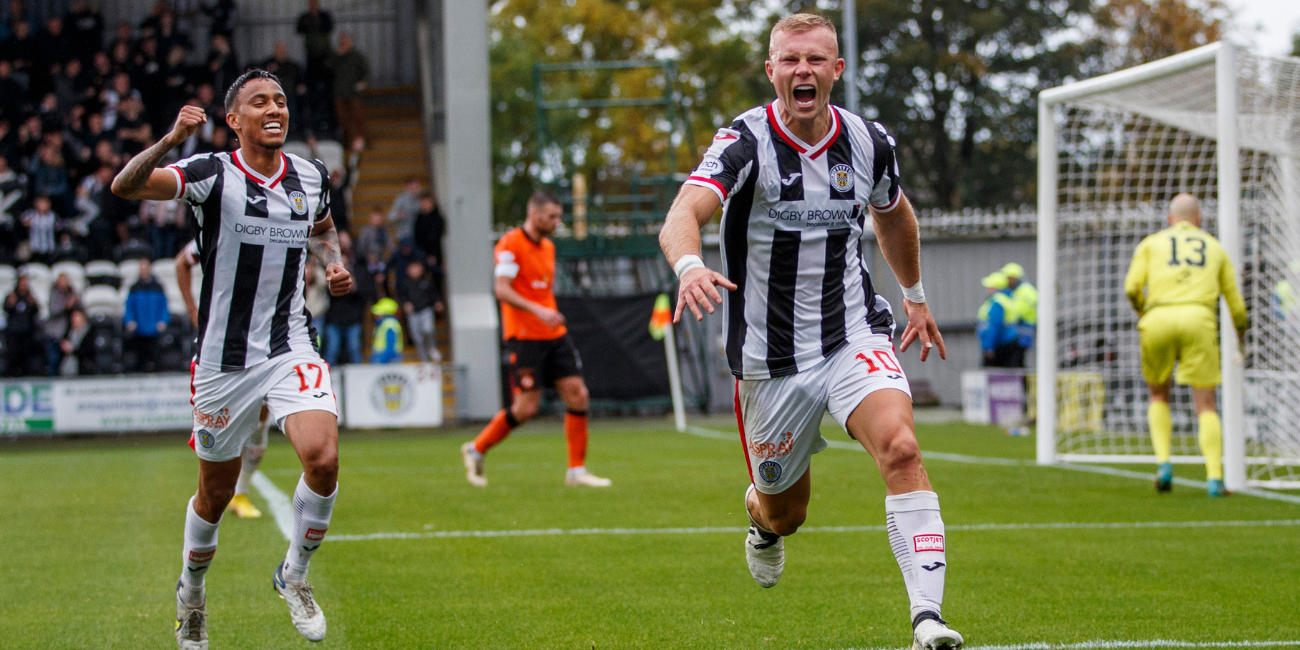 After a quick VAR check to ensure the goal could stand, Main nearly added a second in spectacular style – recovering the ball after his pass to Mark O'Hara had been cut out before thundering a shot off the bar from 25 yards that thumped off the bar. It came back out for Ayunga but he could only chest it wide, although he may have been offside anyway. It wasn't all Saints with Craig Sibbald having two chances for United before the break, both easily dealt with by Carson.

The woodwork foiled Saints again early in the second half, Ayunga getting the better of his man before firing a shot across goal that hit the far post. Having survived that scare, United promptly equalised. A cross from the left was nodded down by Watt to Steven Fletcher, who used his first touch since coming on to control the ball and his second to roll it past Carson. The visitors piled on the pressure as they looked to go in front but that left spaces for Saints to exploit - which they duly did. Baccus won the ball in midfield and fed Strain, who opted to pass out wide to Ayunga rather than have a go himself. It turned out to be the right move, the forward cutting onto his left foot before sending the ball arrowing into the bottom corner to put Saints back in front....

Well, he would have done if VAR hadn't been introduced into Scottish football this weekend. Ref Grant Irvine was soon hearing a voice in his ear-piece and, after looking at the pitch side monitor, ruled it out for a Baccus foul on Aziz Behich in the build-up. The Saints fans and players were furious and tried to use the perceived injustice to fire them up, Baccus sending a shot whistling past the top corner from the edge of the box before Watt headed wide at the other end in what would prove his last meaningful involvement before going off injured. 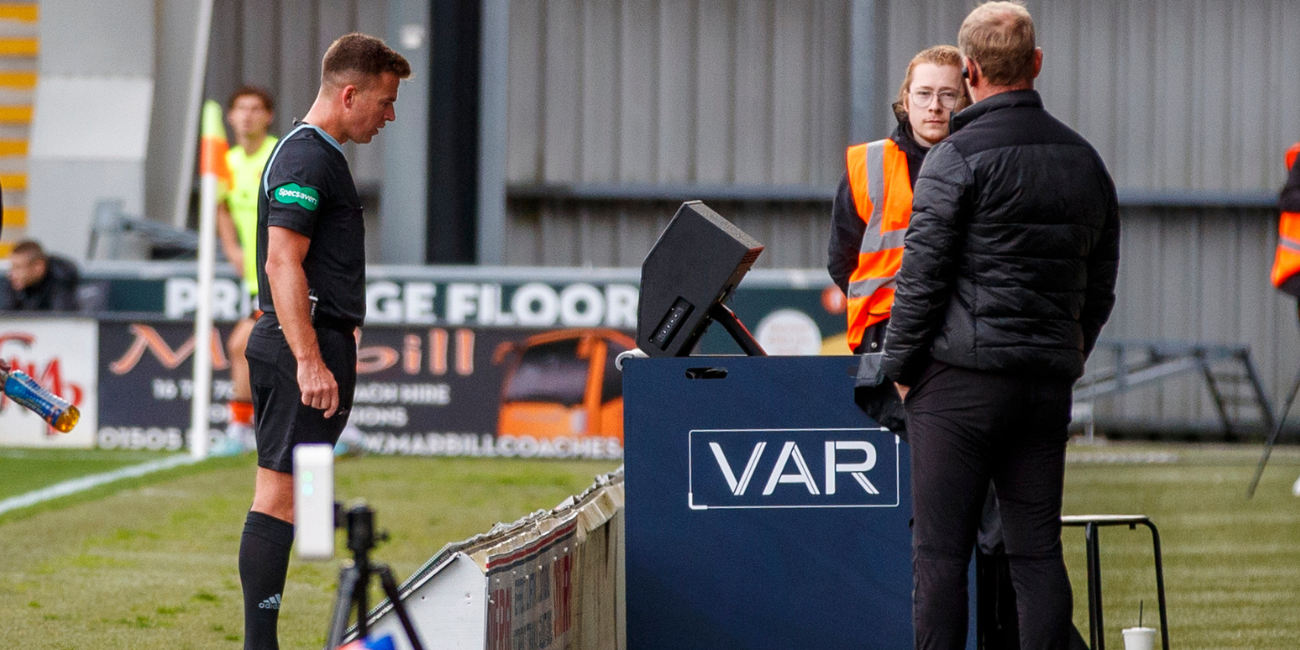 Strain tried to catch Eriksson out with a free-kick from wide that the United keeper had to palm over the bar but it was the visitors who were cranking up the pressure, Liam Smith sending a shot just wide from almost the exact spot he scored from against Queen of the South while on loan at Saints back in 2018. With less than 10 minutes to go the Buddies found the net again – and this time it counted. United could only clear a corner back to Erhahon and he delivered a wonderful cross that Alex Greive – who had only just replaced Ayunga – sent into the bottom corner with a delicious beautiful glancing header.

As four minutes of stoppage time began Saints tried to seal things with a third. Greive won the ball and sent O'Hara on his way before charging forward to receive the return pass. He cut it back for Main, but he couldn't get a clean connection and Eriksson saved the shot. After Ryan Flynn had replaced Erhahon, United almost managed a lucky equaliser when Scott McMann's cross missed everyone and hit the post before going behind – the visitors last hope of salvaging something gone.