Defeat for St Mirren at Ibrox

St Mirren's hopes of a first league win at Ibrox since 1991 were ended after a double from Antonio Colak either side of a James Tavernier penalty as well as a late Fashion Sakala goal gave Rangers a 4-0 win.

Saints created a number of good opportunities through the game but couldn't take any of them and were punished by clinical Rangers.

Stephen Robinson made two changes from the side that started last weekend's dramatic win over Livingston. Alex Greive - who scored the last-gasp winner against the Lions - came in from the start alongside Curtis Main who returned from injury. They replaced Greg Kiltie and the suspended Jonah Ayunga.

The home side took an early lead as they went in front with only four minutes on the clock. Colak was first to react as he forced home from close-range after Borna Barisic's strike from 20 yards smacked off the post.

It was the start Saints wanted to avoid but the reaction was good with the Buddies going close to a leveller on 10 minutes. Alex Greive managed to get a shot away from inside the box but denied by a good save from Allan McGregor.

However, it was Trevor Carson who would be the busier goalkeeper over the next 10 minutes or so with the Saints stopper making a brilliant save to deny Ryan Jack on 11 minutes before twice saving curling efforts from James Tavernier.

Rangers scored a second just after the half hour mark after being awarded a penalty kick by referee Nick Walsh. The referee had deemed that Declan Gallagher fouled Colak and Rangers captain Tavernier netted from 12 yards.

Saints passed up a great chance to pull a goal back five minutes later. Scott Tanser flung a brilliant ball deep into the Rangers box where Marcus Fraser was in acres of space but the defender could only head into the arms of McGregor.

It was quiet start to the second 45 with the first real opportunity in the second period coming when Rabbi Matondo hit the post from 25 yards on 57 minutes.

The Buddies had a huge chance to reduce the deficit with just over 20 minutes of the game. A ball from Keanu Baccus on the right found its way to O'Hara who was all alone in the Rangers box, but the midfielder's effort was blocked by Rangers goalkeeper McGregor. 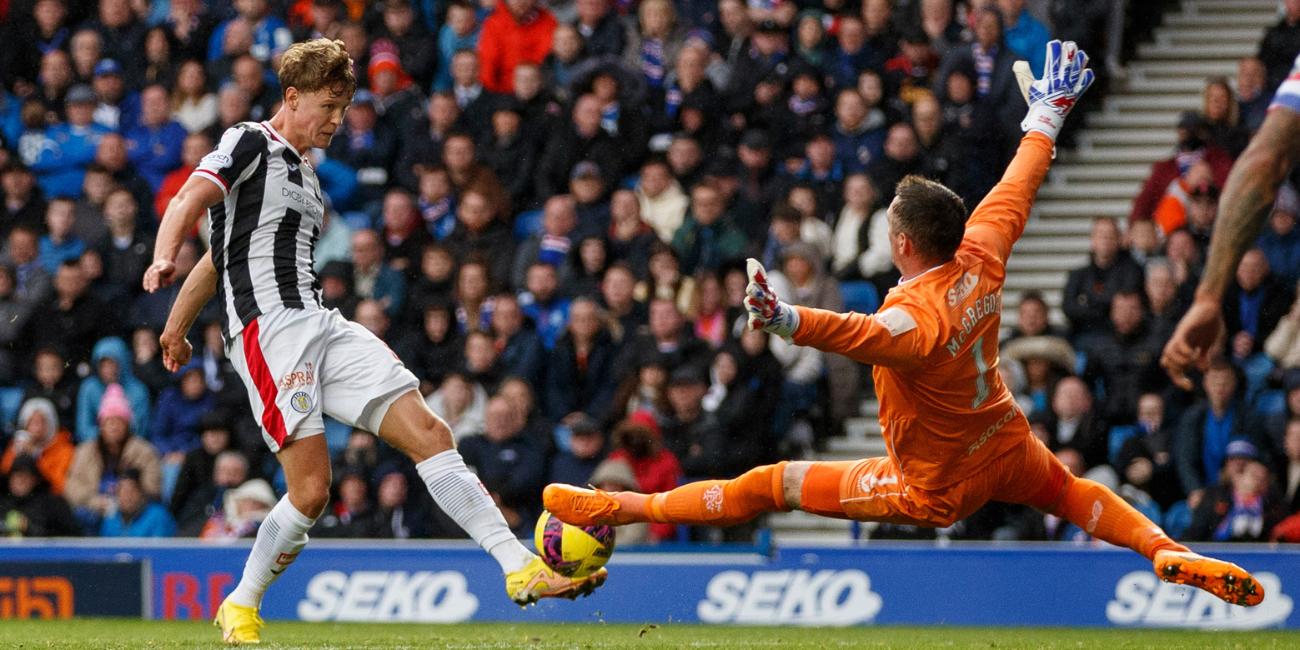 And four minutes later Rangers would put the game beyond doubt when Colak got his second of the afternoon. The forward was slipped through by Sakala and he cut inside before knocking home neatly with the outside of the foot.

Saints would have a couple of late chances as they looked for a consolation. Main's strike from 20 yards had McGregor beaten, but came off the bar. Less than 60 seconds later Baccus forced the veteran goalkeeper into a smart stop. But it was Rangers who would add another with Sakala scoring in injury time to round off the afternoon.