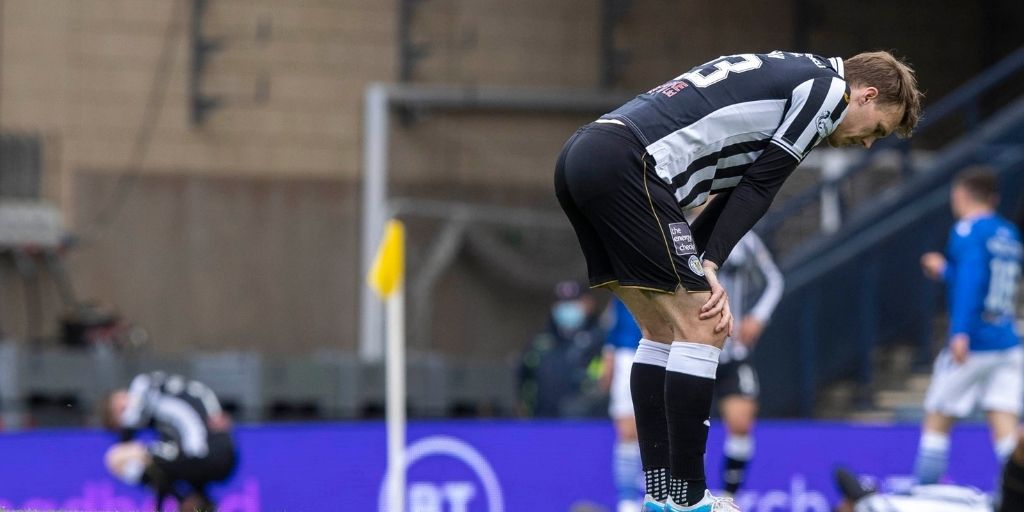 Two goals in two minutes for St Johnstone put St Mirren out of the Scottish Cup at the semi-final stage.

After an evenly fought first half, goals from Chris Kane and Glenn Middleton gave Callum Davidson’s men a lead the Buddies could not quite come back from.

With less than ten minutes to go Conor McCarthy pulled one back and despite throwing all they had in the closing stages St Mirren were unable to get the crucial equaliser.

St Mirren began the match on the front foot, pressing from Jamie McGrath earning an early opening but the cross went beyond the head of Lee Erwin.

There were two more near misses for the Buddies in the opening ten minutes, as a cross from Ilkay Durmus and free kick from Jak Alnwick were both inches out of reach for their targets.

Referee Willie Collum then waved away the Buddies protests when a volley hit by Kristian Dennis appeared to strike Jamie McCart’s hand.

From a hand in the St Johnstone box to one in St Mirren’s box. Alnwick was called upon at the other end and pulled off a stunning save to deny Rooney’s 20-yard effort.

Erwin had the best chance of the first half getting to a Dennis cross first but could only direct the ball at Zander Clark in the St Johnstone goal.

St Johnstone started the second half well on top, but it was the Buddies who had the better of the chances. Ethan Erhahon’s incisive pass found Dennis inside the box. The striker struggled to get the ball under control though and both Dennis and Erwin lashed efforts into St Johnstone defenders.

The Buddies then spurned a great chance to take the lead just after the hour mark, Durmus skinning Rooney easily but Quaner was unable to turn home the fizzed cross.

The missed chances were then punished. With 20 minutes left to play, Kane turned home a cross from substitute Glenn Middleton.

It could have been three soon after, a great reaction save from Alnwick denied Rooney from close range.

St Mirren kept pushing forward and with the introduction of Brophy had plenty of firepower available.

It was through Brophy that the Buddies forced their way back into the tie, the striker winning a free kick. The resulting cross swung in by McGrath and bulleted home by McCarthy. Brophy almost hauled St Mirren level straight after but his curling effort went wide.

Then it was Quaner’s turn to try to force a leveller but his volley from McCarthy’s knockdown flew high over the bar.

The Buddies threw everything forward in the final minutes but couldn’t get the equalising goal.