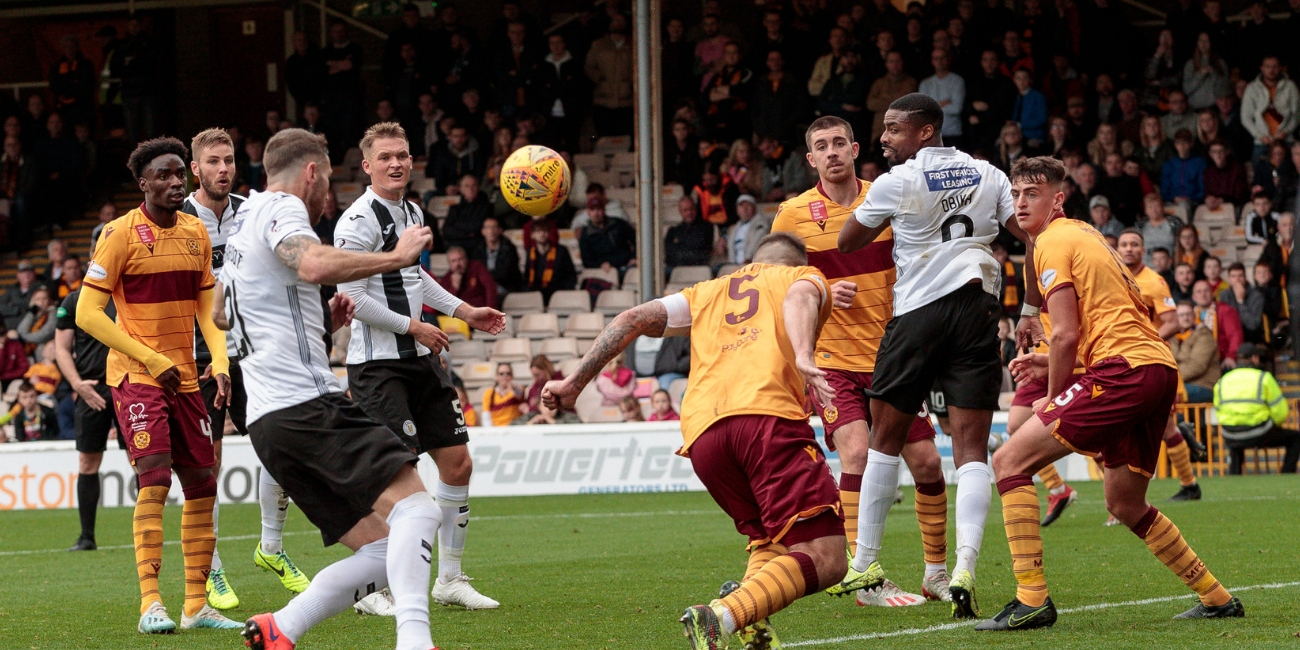 Disappointment for Saints at Motherwell

St Mirren suffered a disappointing 2-0 loss away to Motherwell at Fir Park this afternoon.

It's the first time Jim Goodwin's side have lost by two goals since a 2-0 loss at home to Celtic in April as goals from James Scott and Christopher Long either side of half-time gave Motherwell the three points.

The manager made two changes to the side that drew 0-0 with Hearts last week with Jon Obika and Danny Mullen coming in for Junior Morias and Tony Andreu.

It was one of the changes, Obika, who had the first opportunity of the game with seven minutes played. Ilkay Durmus played a teasing low ball into the box but Declan Gallagher did a good job staying tight to Obika who could only get a slight flick of his boot on to the ball that trickled wide.

Saints goalkeeper Vaclav Hladky was forced into them action twice in the space of two minutes making good stops to deny Liam Polworth and Sherwin Seedorf. The Czech keeper was down well to push away Polworth's low drive from 20 yards, before making himself big to block Seedorf whose good skill on the right cleared a path to get his shot away.

Danny Mullen did well to get on the end of an Obika flick-on on 18 minutes that saw the striker break into the box. But before he could steady himself to get a shot away, Peter Hartley got a foot on the ball to sweep it wide for a Saints corner. Motherwell dealt with the corner and raced forward on the counter. Polworth was sent charging through the middle but the Buddies got numbers back quickly which saw the midfielder take the shot early from distance, dragging wide.

Saints began to grow into the match after a good start from the home side. Obika picked up the ball on the right but his attempt to find Ryan Flynn was too short. But the ball would fall kindly to Sam Foley whose fizzing effort was deflected just over. 'Well goalkeeper Mark Gillespie collected the resultant corner and again sent Motherwell bursting forward at speed. The ball eventually found its way to the lively Polworth inside the box but Hladky again was there to deny the hosts.

Once again Hladky kept the visitors at bay as he made another terrific stop after Devante Cole wriggled through the Saints defence on 36 minutes. The striker broke into the box, but Hladky was quickly off his line to tighten the angle and blocked well with his feet.

But that was only delaying the inevitable as Motherwell took the lead with six minutes of the first half remaining. Scott danced by Durmus and Sean McLoughlin on the edge of the Saints box before checking back and curling into the top corner from 18 yards to give the home side a half-time lead.

After a disappointing first 45, Saints started the second-half brightly with Mullen forcing Gillespie to tip over with a rasping strike on 47 minutes after collecting a lovely through ball from Flynn. The Buddies came close to an equaliser from the resultant corner when it found its way to Sean McLoughlin at the back post. The Irishman's low effort ricocheted into the feet of Paul McGinn whose touch was cleared off the line by 'Well.

Hladky did well to block a deflected Seedorf a minute later, while Mullen felt he had been denied a penalty when he went down in the box on 51 minutes. A minute later, Foley drove forward with a brilliant run from the half-way line but shot straight at Gillespie from 20 yards.

With 20 minutes to go, Hladky made another brilliant save as he, at full-stretch, clawed away Polworth's curling shot from 20 yards out as Motherwell looked to add a second.

Saints were still in the game and almost found an equaliser on 72 minutes. Paul McGinn slipped the ball through to Tony Andreu who clipped the ball into the middle of the box from the byline. Kyle Magennis brought the ball down before flicking goalward. It looked set to find the net only for Liam Grimshaw, on the line, to head wide to deny Saints a precious equaliser.

With less than 10 minutes remaining the Buddies had two opportunities in quick succession. Junior Morias had a low shot pushed away by Gillespie. Motherwell couldn't clear their lines allowing Calum Waters finding Ryan Flynn in space on the edge of the area, but the midfielder side-footed over.

Jim Goodwin made a third and final change with less than five minutes to go with Oan Djorkaeff replacing Ryan Flynn. The Frenchman had a chance to make an instant impact for Saints but he fresh air swiped at Morias' low cross.

And, unfortunately, Djorkaeff's misplaced pass allowed Chris Long the opportunity to make it 2-0 to Motherwell. The Steelman striker needed no second invitation to slam home from close range to secure the points for the Lanarkshire side.