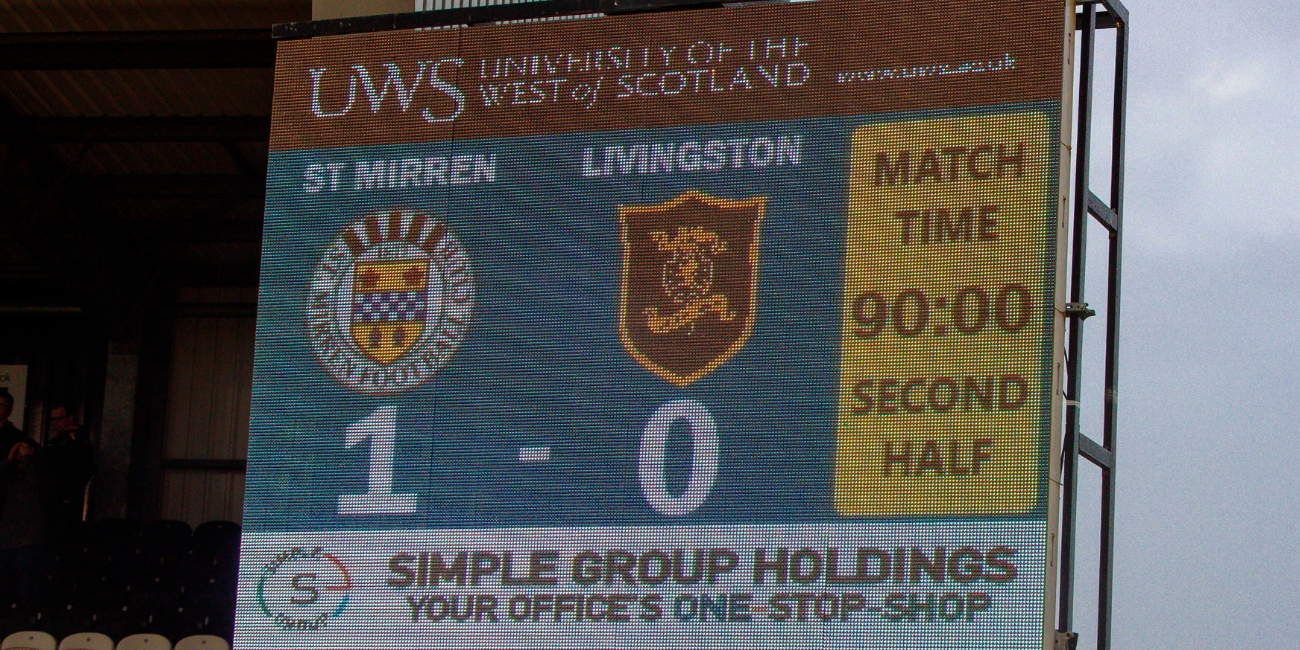 A game that appeared to be petering out into an instantly forgettable draw could instead end up proving to be a pivotal moment in Saints' season as they snatched a late win over Livingston.

With barely a minute left, Simeon Jackson saw his shot parried by Liam Kelly. The ball sat up invitingly for anyone running in and Ryan Flynn did just that, taking what seemed like an age – although was probably only a couple of seconds – to compose himself before smashing the ball home.

It proved to be the winner in a game that was played in horrendous wind and rain, which may explain why chances were at a premium. Chris Erskine wasted Livi's best first half chance as he blazed over the bar while at the other end Kelly denied Duckens Nazon. The second half wasn't a great deal better, Craig Halkett curling a free-kick over for the visitors and Flynn testing Kelly the pick of the few highlights before the late drama.

Jackson once again found himself on the bench as Nazon was picked in the Saints attack, Anders Dreyer and captain Stephen McGinn returning as Kyle McAllister and the suspended Greg Tansey the pair dropping out. Former Buddies Ross Stewart, Gregg Wylde and Ryan Hardie were on the bench for the visitors who handed a first start to Ciaron Brown and were also able to name Raffa de Vita on the bench for the first time this season.

With the wind blowing down the pitch towards the away end, it was little surprise that Livingston chose to shoot towards their own fans. It made it hard for Saints to get out of their own half as every time they kicked the ball forward it came straight back at them. When Mihai Popescu fouled Steven Lawless just outside the Buddies box it gave Livi a chance to use the conditions to their advantage, although how much the wind had to do with Vaclav Hladky failing to hold Keaghan Jacobs' free-kick is hard to tell. Whatever, the ball sat up invitingly for Erskine but, with the Saints keeper on the deck, he could only blast over the bar.

The wind and rain was making it difficult for both teams, Lawless flashing a shot wide before Saints threatened for the first time, Duckens Nazon volleying over from Paul McGinn's cross. It marked the start of the first real spell of pressure from the hosts, a corner and a free-kick causing problems in the Livi box before Ethan Erhahon sent Nazon in behind the visiting defence only for his shot to be turned behind by Kelly.

Saints seemed to have got to grips with the weather but had a couple of close calls just before the break. After Mateo Muzek cheaply gave the ball away, Livi were able to work it to Craig Sibbald at the back post, his header being punched away by Hladky. Then, on the stroke of half-time, a Livingston corner was only cleared as far as Sibbald at the edge of the box but the midfielder drilled his shot off target.

Despite now playing into the wind, the visitors were first to threaten in the second half as Erskine shot well wide. After Nazon was fouled by Steve Lawson, Cammy MacPherson decided to to use the wind and have a go with the long-range free-kick but it bounced wide of the Livi goal. After that brief flurry, chances continued to be at a premium but one came the way of Jack Baird when a corner from McAllister – who had replaced Dreyer – bounced his way but the big defender failed to connect with the ball.

Livi were dealt a blow when Lawson had to go off injured after being clattered by Stephen McGinn just outside the box. The free-kick was in a great position and Halkett was unlucky to see his attempt go just over the bar, a few Livi fans at the other end of the ground briefly thinking he'd found the net. Saints were next to go close, McAllister playing in Flynn whose drive stung the palms of Kelly, the rebound bouncing off the head of Jackson and going behind before the sub had had a chance to react. The same player was squeezed out as Saints threatened again before Paul McGinn saw his low shot saved by Kelly.

With the rain and wind at their strongest, few people would have complained if the officials had decided to call it quits at that point and not bother with the last five minutes. Of course they didn't, which turned out to be a good thing from a Saints point of view. In the final few seconds of normal time Jackson – who had replaced Nazon – got the better of two Livingston players before having a go from the edge of the box. Kelly wasn't able to hold his shot and Flynn rushed in to thump it into the net.

Oran Kearney's men had four minutes of stoppage time to see out but they did it comfortably, a Hardie shot that Hladky comfortably saved the only real danger.

It seemed appropriate that as the full-time whistle went the rain stopped and the sun came out to mark Saints' first league win of 2019 – a victory that moves them to within a point of Dundee with just 10 games of the Premiership season to go.