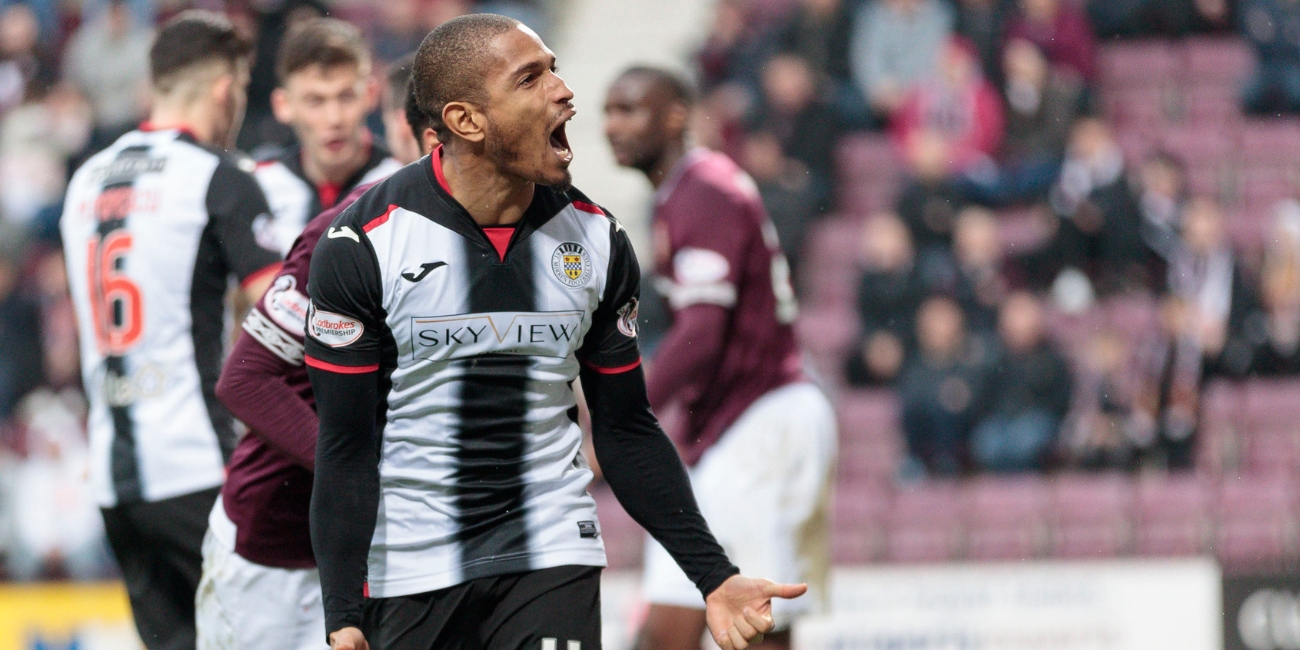 Saints picked up another good point on the road as we drew 1-1 with Hearts at Tynecastle this afternoon.

The Buddies were good value for the point as we closed the gap on Dundee and Hamilton to four points.

It was almost a dream start to the match for Oran Kearney's men with Greg Tansey going close to opening the scoring with a little over 60 seconds on the clock. A half-hearted penalty shout was denied by referee Don Robertson when Duckens Nazon went down in the box. The ball found its way to Kyle McAllister on the right who did brilliantly to beat his man but looked like he was being impeded. Again, nothing was given but the winger was strong enough to force the ball across the box where Tansey ran on to it outside the area and smashed just by the right-hand post.

But it wasn't just Saints who were determined to start the game well. Just a few minutes after Tansey's early chance, Buddies goalkeeper Vaclav Hladky had to be alert to save from Steven Naismith after the veteran forward found space inside the box.

Saints had another great chance on 10 minutes after winning a corner kick. McAllister's low ball in somehow found its way to the back post to meet an unmarked Paul McGinn who scuffed a volley wide.

Both sides had half-chances before the half hour mark with Nazon curling over from 20 yards and Christophe Berra heading straight at Hladky.

The Buddies players felt they should have had a penalty on 25 minutes when Nazon was felled right on the edge of the area. The players argued the challenge had happened inside the box, but Don Robertson was adamant the foul had taken place just outside the area and a free kick was awarded. Cammy MacPherson went across to take from a tight angle and fizzed over.

Nazon had a great chance to put St Mirren in front on 31 minutes after being found by Paul McGinn inside the box but the Haitian striker fluffed his lines as he tried to get the shot away.

Two minutes later Hladky was the hero for Saints after a stramash in the box making a number of saves - the pick of them being to deny Berra what looked a certain opener.

Saints should have taken a lead into the half-time interval when McAllister passed up a great opportunity. After wonderfully timed challenge by Tansey on Sean Clare inside the St Mirren box following a Hearts corner, McAllister nipped in ahead Berra to steal the ball off the Jambos captain near the halfway line. The tricky winger turned the afterburners on as he burst forward and broke into the box. However, he somehow put the ball wide from just inside the area when he looked poised to smash it into the far corner of the net.

The home side started the second half the stronger and opened the scoring 10 minutes after the interval. It was Clevid Dikamona who rose the highest from a corner kick to nod beyond Hladky.

It was a bitter blow after an impressive first half performance, but Saints refused to let heads drop and had an appeal for a penalty waved away just after the hour mark when they claimed a Nazon shot was blocked by a Hearts hand.

The Buddies kept at it and found themselves level on 66 minutes. A corner in came off the head of Hearts midfielder Sean Clare and went beyond Zlamal to make it 1-1.

And how close one nearly became two for Saints almost immediately after the equaliser. A dangerous low ball from the right from McGinn was ready to be tapped home from close range by Simeon Jackson. But Jambos defender Dikamona got a toe on it which turned the ball goalward. Zlamal had to be at full stretch to push away the deflection as it headed towards the top corner of the net.

Both sides created half chances as the game ebbed away, but in the end had to settle for a point apiece.