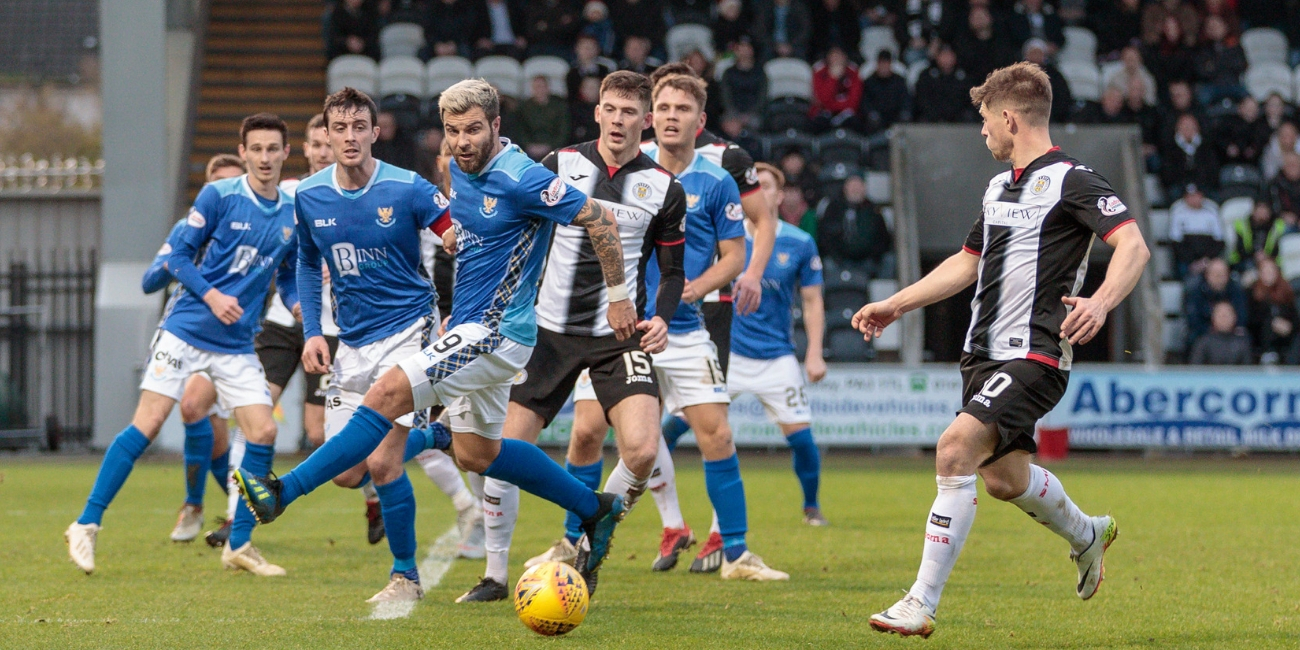 St Mirren's last home game of 2018 ended in heartbreak as St Johnstone grabbed all three points in the last minute.

After a forgettable first half, things livened up after the break with the Buddies threatening through Paul McGinn and Cammy Smith. However, the better chances fell to the Perth Saints with Buddies goalie Dean Lynnes doing well to deny Richard Foster.

When Chris Kane wasted a great chance to score for Tommy Wright's men it looked as if the points would be shared, but in the final few seconds Tony Watt popped up to score the only goal and give his side a late Christmas present.

Smith was back in the side at the expense of the injured Cody Cooke with Adam Hammill returning in place of Ryan Edwards. The Saintees had lost narrowly at home to Rangers on Sunday and made just one change, Danny Swanson coming into midfield in place of Ross Callachan.

The opening exchanges suggested we were in for a Christmas cracker as Hammill fizzed an early free-kick across goal before Watt headed wide at the other end. Another Hammill free-kick produced another chance as it was only knocked out as far as Smith, but his volley was easily held by Zander Clark. The visitors were then denied a penalty for Stephen McGinn's challenge on Murray Davidson, their frustration compounded by Davidson having to go off injured and Callachan replacing him after just 15 minutes.

After that the first half fizzled out, a few St Johnstone crosses causing problems in the home defence before the danger was eventually cleared. Just before the break, Hammill was involved in a charge forward but when he got his shot away it was well wide – the winger appealing in vain for a corner.

Simeon Jackson was just unable to get onto Lee Hodson's through ball thanks to the efforts of Joe Shaghnessy early in the second half before the Saintees passed up a good chance to take the lead. After regaining possession, Alfie Jones tried to hack the ball clear from the byline but instead kicked it straight to Callachan at the edge of the box, only for him to drill his shot wide. The midfielder went down rather easily inside the box a few minutes later, ref Kevin Clancy booking him for his dive.

The game was beginning to open up a bit more, Hodson lofting the ball into Clark's grasp with what seemed to between a shot and a cross from the on-loan Rangers man. Watt had another penalty appeal turned down before doing well to get the better of Anton Ferdinand only for his shot to be deflected across goal and behind.

It took the Buddies more than an hour to force a corner but it was almost worth the wait, Ethan Erhahon taking it short to Hammill whose cross was stabbed goalwards by Jones before being cleared. Paul McGinn and Smith both saw shots blocked as the Paisley Saints continued to push for the opener. However, Dean Lyness was the busier of the keepers as he tipped over Richard Foster's shot before comfortably saving Callachan's header.

The visitors were finishing the game more strongly and twice came close to going in front. Lyness did well to get something on Scott Tanser's fierce cross but the ball flew straight at Erhahon, bouncing off the youngster before thankfully going past the post. There was then another huge let-off when Jason Kerr knocked a free-kick down for sub Kane but he somehow shot wide from close range when it looked easier to score.

It was a warning and it was one that wasn't heeded as the Saintees snatched the winner with little more than 60 seconds left. David Wotherspoon found Tanser with a quick throw and his pinpoint cross was headed home by Watt to give the visitors all three points. It was harsh on Oran Kearney's side, who probably didn't do enough to win the game but definitely didn't deserve to end up with nothing.