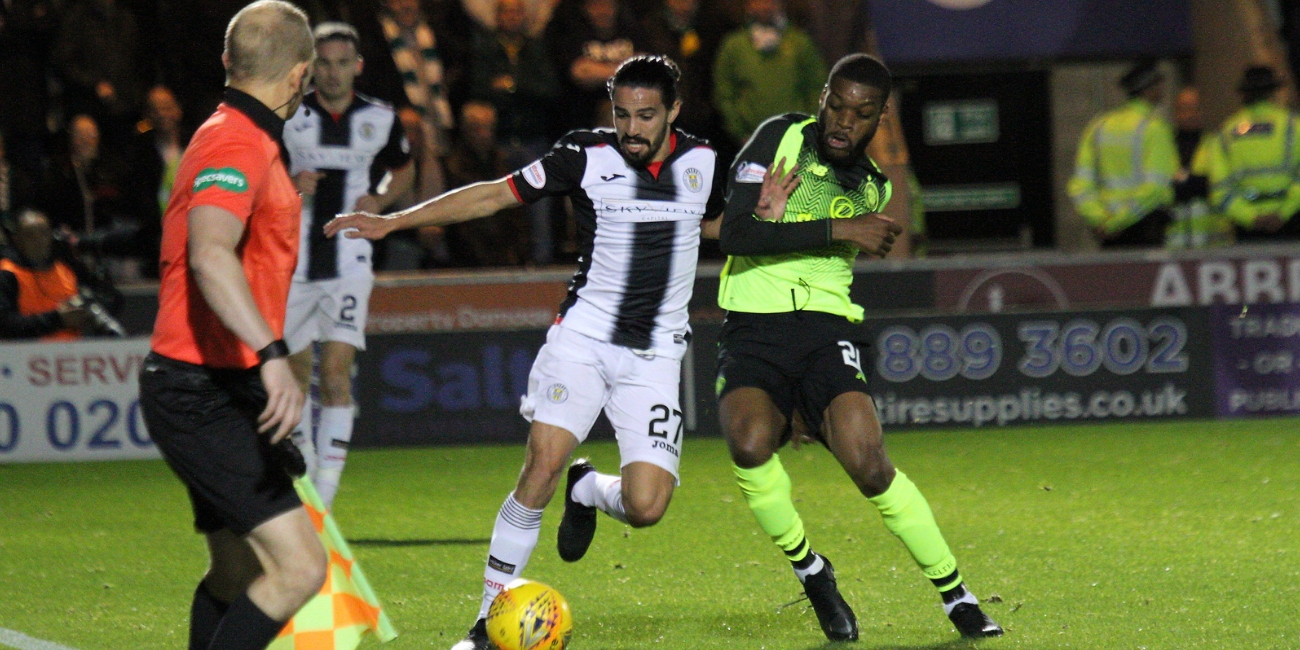 Oran Kearney got his Saints' managerial career off to a fine start as his side picked up a deserved point against champions Celtic.

The Buddies were the better side in the first half, Ryan Flynn and Lee Hodson going closest with the many chances the side created. And when Olivier Ntcham was sent off for two yellows before the break it gave Saints a great chance of picking up their first win since the opening day of the season.

But in the second half Celtic dominated possession, the hosts unable to get out of their own half for large parts of the game. However, it wasn't until the final quarter that the champions started creating chances and when they did they were denied by poor finishing or Craig Samson. They thought they'd finally made the breakthrough in the dying seconds of injury time when Leigh Griffiths found the net but the flag was already up for offside. Had the goal stood, it would have been a cruel end for a Saints team who worked their socks off for their new manager.

Kearney made five changes for his first game in charge, Friday signing Anton Ferdinand the most notable as he started in defence alongside Jack Baird. There was also a debut for Hearts loanee Ryan Edwards and Danny Mullen was the lone man in attack with Paul McGinn returning at rightback. Celtic started with Odsonne Edouard up front and there was a debut for defender Filip Benkovic, former Buddie Lewis Morgan out through injury.

Edwards made a lively start to his Saints career he was booked inside two minutes after a coming together with Kieran Tierney. Seconds later the Buddies could have been front, Ntcham being penalised for handball and Cammy Smith firing in a free-kick that Craig Gordon palmed away. The bright start continued as Kyle Magennis lashed a shot over from a tight angle after the ball broke kindly for him before Celtic got a sight of goal for the first time, James Forrest robbing Hodson and charging forward only to drag his shot across goal.

Saints were creating by far the better chances, Hodson delivering a great cross for the flying Flynn but he headed over. Smith was denied by Gordon at close range before Ntcham was finally booked for persistent fouling after a poor tackle on Edwards. Saints went close again when a corner found Jack Baird and he turned before trundling his shot wide.

The Buddies had looked by far the better in attack and almost took the lead when Paul McGinn's cross was only knocked out as far as Hodson, his drive being deflected inches past the post with Gordon beaten. Celtic then went even closer, Kris Ajer heading on a corner for Dedryck Boyota whose header was nodded off the line by Flynn. The champions had suddenly come to life but were dealt a blow when Ntcham was sent off. The midfielder had continued to run about fouling folk after his yellow card and when he flew in late on Stephen McGinn it was obvious what was coming next – the tackle almost worthy of a straight red, let alone a second booking.

Despite being a man down, Celtic controlled the early stages of the second half as Saints seemed happy to let them have plenty of possession. However, they weren't able to do a great deal with it so Leigh Griffiths was introduced at the expense of Benkovic in the hope he could make the breakthrough. His arrival added some fresh impetus as Celtic quickly forced a corner but Ajer's shot was blocked before Tierney sent a hopeful shot well wide.

Saints were sitting deeper and deeper and the defending was a bit frantic at times, clearances going straight to the opposing backline. Tom Rogic was booked for shoving over Mullen after winning a free-kick before Griffiths blazed a shot over after being set up by Forrest. Ferdinand had strolled through his Saints debut but a lack of match fitness meant it came to an end 20 minutes from the end, Cammy MacPherson taking his place. Another change soon followed, the tiring Smith replaced by Hayden Coulson. Scott Brown was booked after halting Mullen's run before his team created a great chance, Samson unable to hold Edouard's shot only for Callum McGregor to knock the ball by the post.

Excursions into the visiting half had been few and far between for Saints after the break but a ball over the top allowed Mullen to race through only for Brown to intercept his pass. McGregor fashioned himself a chance as he danced past a Saints defender but his weak shot was easy meat for Samson. As the final five minutes approached the hard-working Mullen was replaced by Matty Willock as Celtic replaced Edouard with Ryan Christie. Just before the changes, Stephen McGinn had given away a free-kick for a foul on Forrest. The initial ball was only cleared as far as the winger at the edge of the box but his attempt to chip Samson was plucked out of the air by the keeper.

The visitors looked to be getting closer and closer to snatching all three points, a corner bouncing around the box before Boyota headed over then Samson held a header from Christie. In virtually the final second of the game Griffiths was sent through but before he could pull the trigger the flag was up for offside, much to the relief of the Saints fans who were soon able to celebrate a point. They had witnessed a tremendous display from a well organised team that gave everything for their new boss, providing plenty of optimism for the weeks ahead.