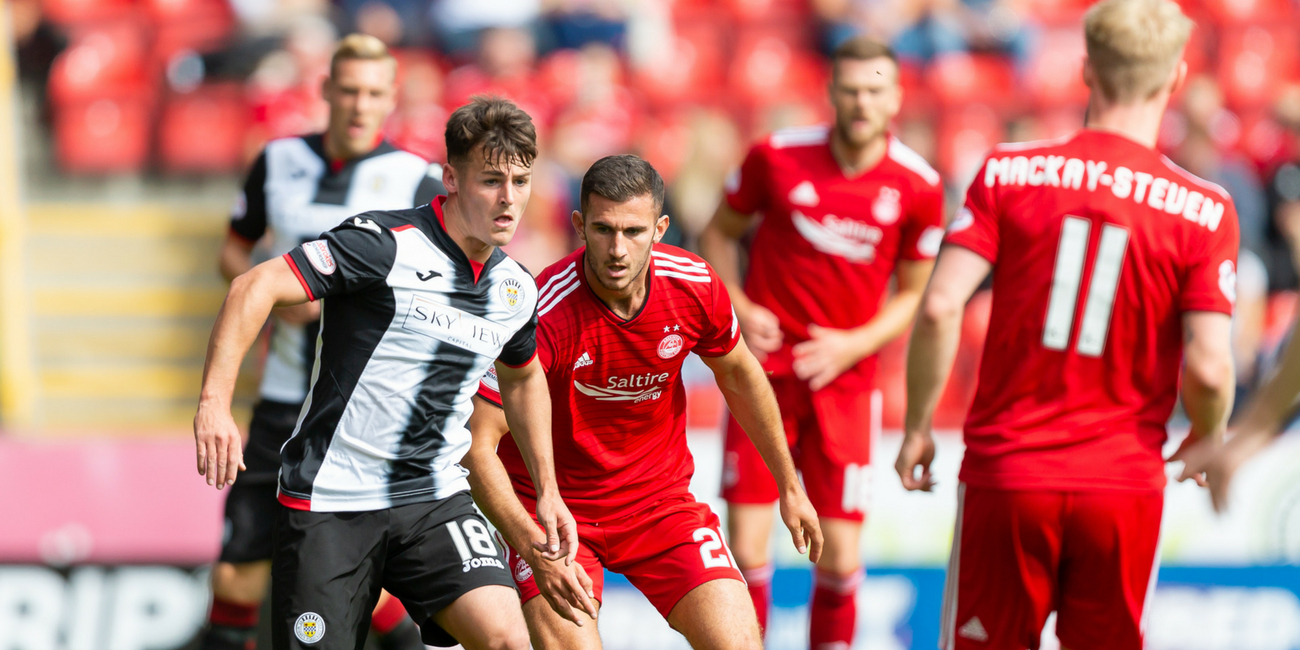 St Mirren's Betfred Cup campaign came to an end at Pittodrie this afternoon after a disappointing 4-0 defeat to Aberdeen.

Three goals in 10 first half minutes had The Dons in control, before a second half penalty kick put the seal on a frustrating day for Saints.

Alan Stubbs named the same starting eleven that featured against Rangers with new signing Alfie Jones having to settle for a place on the bench.

The hosts signalled their intent early with just eight seconds on the clock when Craig Samson was forced into a smart stop at the near post to deny Stevie May.

Samson made a great fingertip save on five minutes to deny Lewis Ferguson's header. It was Ferguson who went close from the resultant corner, and the teenager will have been disappointed he didn't hit the target.

Saints had a glorious chance to take the lead on 13 minutes as Cammy Smith won a free kick on the left side, deep in the Aberdeen half. It was a nice free kick from Hayden Coulson which met the head of Nicolai Brock-Madsen, but the Danish forward headed over.

Three minutes later, Aberdeen were in front. Lewis Ferguson bounded down the left and floated a cross to the back post. Gary Mackay-Steven waited for it to drop before volleying into the net via a deflection off Coulson.

The Dons doubled their advantage just four minutes later with Mackay-Steven turning provider this time. The tricky winger sent a cross from the right to the back post where it met Graeme Shinnie who dived in ahead of Cammy Smith to bullet home.

The home side further extended their lead on 26 minutes. Craig Samson's attempted pass for Cole Kpekawa was pounced upon by Scott Wright. The winger rounded the goalkeeper and laid the ball across to Stevie May with the striker tucking home into the empty net from all of 15 yards.

Brock-Madsen was denied a first St Mirren goal after good play from Smith saw the on-loan striker go one-on-one with Joe Lewis. But the English goalkeeper saved with his legs with Matty Willock heading over from the resultant corner.

Aberdeen continued to threaten before the end of the half with Shinnie instrumental for the Dons. He zipped a dangerous ball across the Saints box which just missed the toes of May on 35 minutes before heading over a Dom Ball cross two minutes later. As the game ebbed towards the interval it was Shinnie who went close again - denied by a good save from Samson.

The hosts almost had a fourth five minutes into the second half after strong play from Wright saw the 21 year-old get away from Jack Baird, but Samson once again denied the Dons with May unable to force home the rebound.

Gary Mackay-Steven got his second for the Dons a few minutes before the hour mark from the penalty spot to make it 4-0. As the winger looked to dance into the Saints box he was brought down by Coulson with referee Steven McLean pointing to the spot. Samson went the right way but couldn't keep the effort out.

The game petered out with the contest over long before the final whistle. Saints are back in league action next Saturday as we play host to Livingston at the Simple Digital Arena.