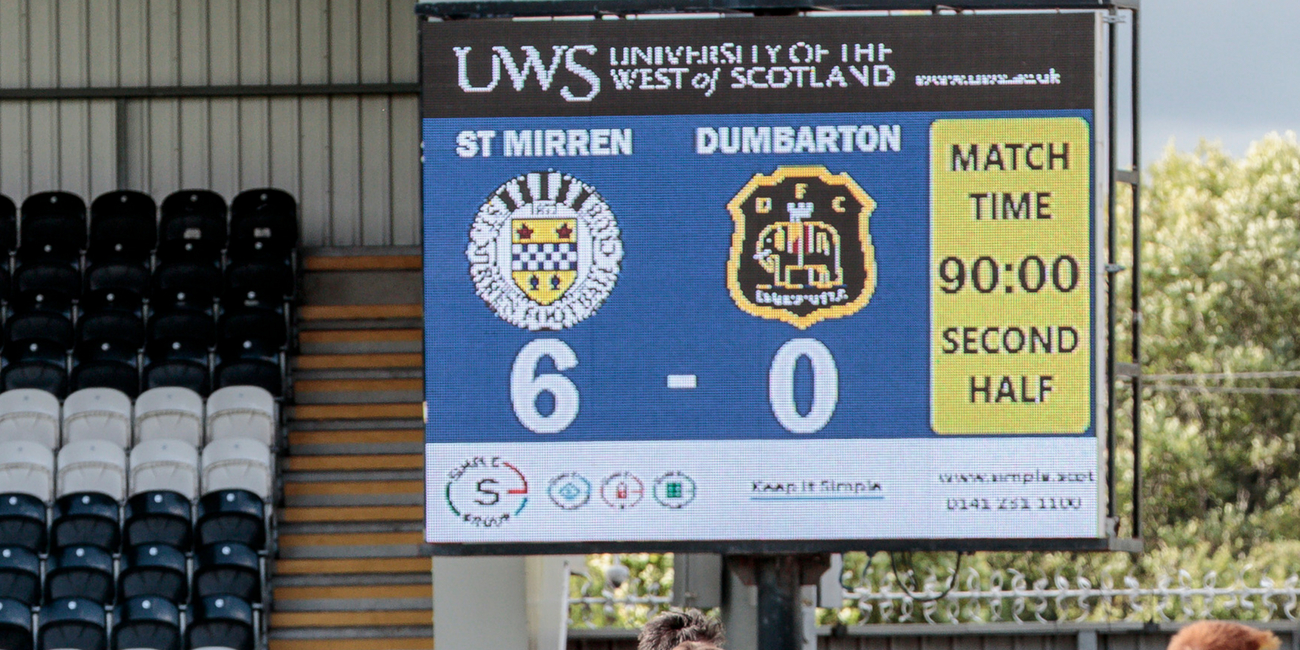 A second half goal spree saw Saints through to the next phase of the Betfred Cup as they thumped Dumbarton.

The scoring started after less than 60 seconds as Hayden Coulson shot past Grant Adam with Cammy Smith nodding in the second 10 minutes before the break. When Ross Stewart headed in the third just after half-time it was game over but a further three goals followed to ensure the Buddies finished as one of the best second placed teams.

Skipper Stephen McGinn scored a spectacular fourth with a fantastic shot from 25 yards and late on Jim Kellerman came off the bench to force home his first goal for the club. Moments later Smith rounded things off with a sensational strike from 35 yards to cap a tremendous afternoon for Alan Stubbs' side.

The Buddies have struggled in front of goal in their League Cup campaign but you wouldn't have known it as they took the lead inside the first minute. Stephen McGinn released Coulson down the left and the fullback charged into the box before smashing past Adam for his first senior goal. Having made such an early breakthrough, Saints were keen to extend their advantage quickly as Adam saved Smith's long range effort before Willie Dyer hacked the ball off the line as Danny Mullen tried to divert a Josh Maggenis corner home.

New boy Matty Willock gave a glimpse of what he is capable of as he beat one man before he surged forward and attempted to chip Adam, who plucked the ball out of the air. The Sons keeper was in action again moments later as he denied Smith, the visitors then being forced into a change as they lost Ross Perry to injury, Andy Little taking his place.

The stoppage seemed to disrupt Saints' flow a little bit and it took them a wee while to get it back, a Magennis drive flashing past Adam's far post. Coulson went even closer to getting Saints' second soon after, exchanging passes with Smith as he burst forward again before rattling a shot off the post. The lead was finally doubled 10 minutes before the break, Mullen finding Paul McGinn down the right and his tremendous cross was head in by Smith.

Any doubts that Saints were heading for their first win of the season were wiped out early in second half as a cross from the byline was deflected up in the air and Stewart outjumped everyone to head past Adam. It could have been four soon after, Willock going on another run only to drag his shot wide of the far post before Mullen curled an effort wide.

It was merely delaying the inevitable and when the fourth arrived it was a screamer. Coulson found McGinn around 25 yards out and the skipper composed himself before launching a shot that flew into the top corner despite Adam getting something on it. There was little to get excited about after that, Saints having plenty of the ball but creating nothing of note with Craig Samson a virtual spectator at the other end.

Late on there were two more things to cheer. First Jim Kellermann, who had replaced Magennis, bagged his first Saints goal when he scrambled the ball home from a corner. A couple of minutes later Smith got his second and the Buddies' sixth as the ball broke to him midway inside the Dumbarton half and he sent it sailing over Adam's head from 35 yards to finish the scoring in spectacular style.

The two late goals meant Saints had secured one of the last 16 spots on offer to the best performing second placed sides – the first time the Buddies have made it that far since the group stage was introduced in 2016.