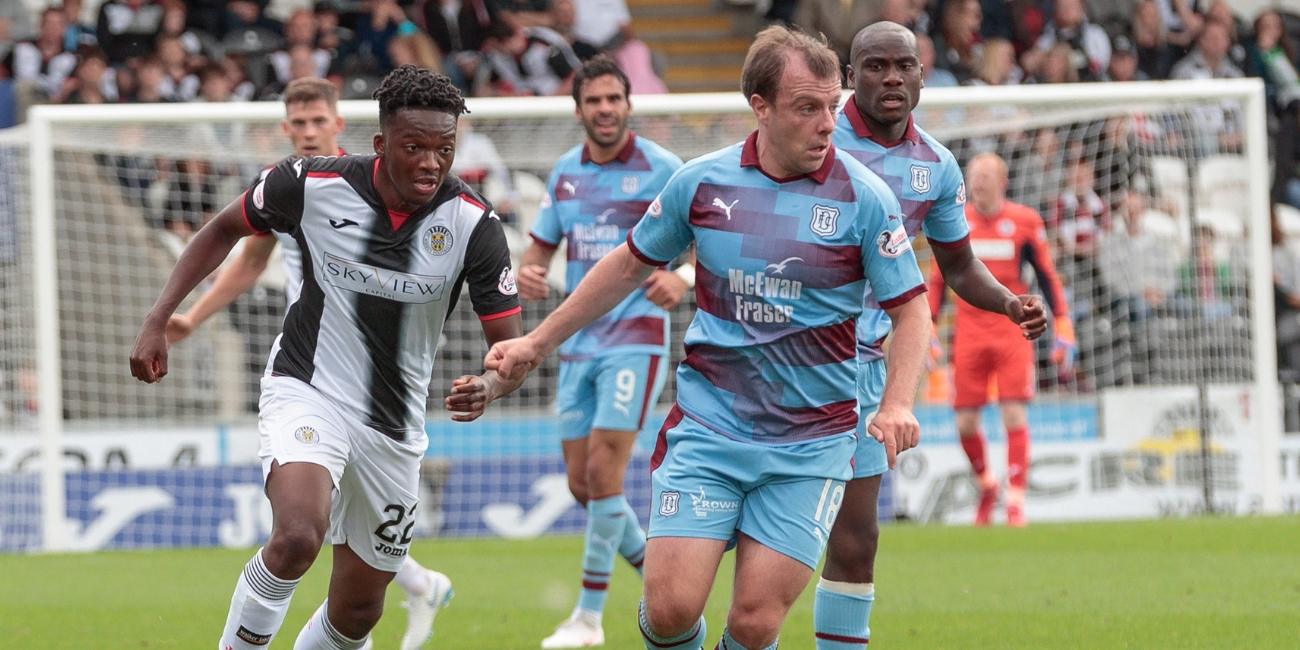 It’s 12th versus 11th tomorrow in the Ladbrokes Premiership as St Mirren travel to bottom side Dundee.

The Buddies go into the match sitting one point above Jim McIntyre’s Dark Blues.

It’s been a tough start to the season for each side with both seeing managerial changes in the early part of the season.

Oran Kearney has been in charge of St Mirren since September, while Jim McIntyre replaced Neil McCann at Dens in the middle of October.

Saints’ only league win so far this season came against tomorrow’s opponents on the opening day of the season. A Danny Mullen double came either side of an Elton Ngwatala strike to get St Mirren off to a winning start on their return to the Premiership.

The Buddies other Premiership point came at the Simple Digital Arena in Kearney’s first match as Saints gaffer as they drew 0-0 with champions Celtic.

Dundee’s three points came from a 2-0 win away to Hamilton in September. Andy Boyle and Karl Madianga scored for the Dark Blues that afternoon.

Saints come into tomorrow’s match on the back of a 2-0 loss to Rangers at home last Saturday. While Rangers ultimately picked up the points thanks to two late goals, the Buddies would have been encouraged by a good performance against Steven Gerrard’s side.

Dundee were edged out by Motherwell last weekend with the Fir Park side scoring in the second half to give them a 1-0 win that kept tomorrow’s hosts bottom.

St Mirren have won on their last two trips to Dens Park. The last visit came in January 2017 with goals from John Sutton and Jack Baird helping the Buddies to a 2-0 win in the Scottish Cup.

The last league meeting between the two at Dens was in 2014 and also saw Saints come out on top thanks to a Kenny McLean double and a wonderful solo goal from Stevie Mallan securing a 3-1 win.

Dundee's last win over St Mirren was back in January 2015 with second half goals from Gary Irvine and Iain Davidson giving the Dee a 2-1 win at the Simple Digital Arena.

With Dundee failing to pick up a single point at home in the league this season, and Saints having not taken a point on their league travels this season, something has to give tomorrow afternoon.

A win for St Mirren would give Oran Kearney his first as Saints gaffer and see the Buddies move four points clear of Dundee – and potentially move to within three points of 10th place Hamilton depending on their result against St Johnstone.

If Dundee pick up all three points it would give Jim McIntyre his first points as Dundee boss and see his side leapfrog Saints into 11th.