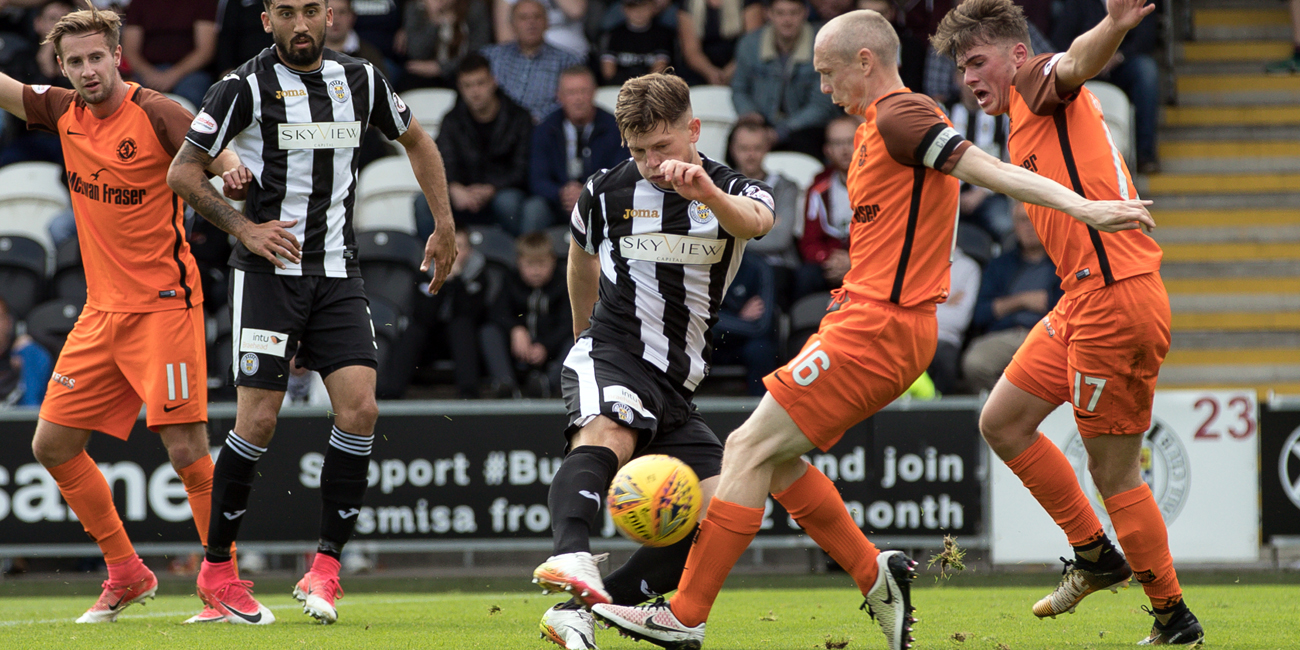 St Mirren will be crowned Ladbrokes Championship winners at Tannadice tonight - if they avoid defeat to Dundee United.

The Buddies need just a point to seal the title after winning at Brechin on Saturday with Kyle Magennis' seventh minute strike the difference between the division's top and bottom sides. It looked for a spell that Saturday may have been St Mirren's day with Livingston being held by Morton. But Alan Lithgow struck in the 86th minute to give The Lions all three points to put the champagne on ice for Saints.

It's been a disappointing season for Dundee United who currently occupy fourth place in the Championship. The Arabs were title favourites coming into the season but poor early form saw manager Ray MacKinnon replaced by Csaba Laszlo in October. There was an initial boost for United as they went top of the league, but they fell out of contention after having only won three of their last 14 league matches.

Laszlo's side come into tonight's match on the back of 3-2 loss away to Dumbarton on Saturday. Ex-Saint Calum Gallagher put Dumbarton ahead in the first half from close range. Anthony Ralston levelled for United a few minutes into the second half. Less than ten minutes later, Craig Barr put Dumbarton back in front before Scott McDonald scored his 12th goal of the season. But, with just 10 minutes remaining, Barr scored his second of the afternoon to consign United to a third defeat in six.

Saints and United have met three times this season with The Buddies coming out on top on two occasions and The Terrors winning the other. The first saw United, who had won their opening three league matches, travel to Paisley at the end of August. The Buddies emphatically ended that winning run though running out deserved 3-0 winners thanks to a double from Lewis Morgan and Ian McShane's first St Mirren goal.

United exacted a measure of revenge when Saints visited Tannadice at the start of November. Goals either side of half time from Mark Durnan and Sam Stanton rendered Adam Eckersley's fine 93rd minute strike as nothing more than a consolation. That win drew United level on points with The Buddies at the top of the table.

The last meeting between the two came at the end of 2017 with The Terrors making their way to Paisley for a second time. The visitors spurned a glorious chance to take an early lead with Craig Samson making a good save to deny Paul McMullan from the penalty spot. Lewis Morgan grabbed a second half double to seal a 2-0 win for Saints and move them five points clear of United heading into 2018.

Tonight could be the culmination of over a year of hard work since Jack Ross took charge of the club in October 2016. The manager has transformed a side that looked destined for relegation to the third tier to on the brink of promotion back to the Premiership. While a draw or win would do for The Buddies, United will be keen to avoid a St Mirren party at their own stadium and strenghten their play-off hopes with a victory.