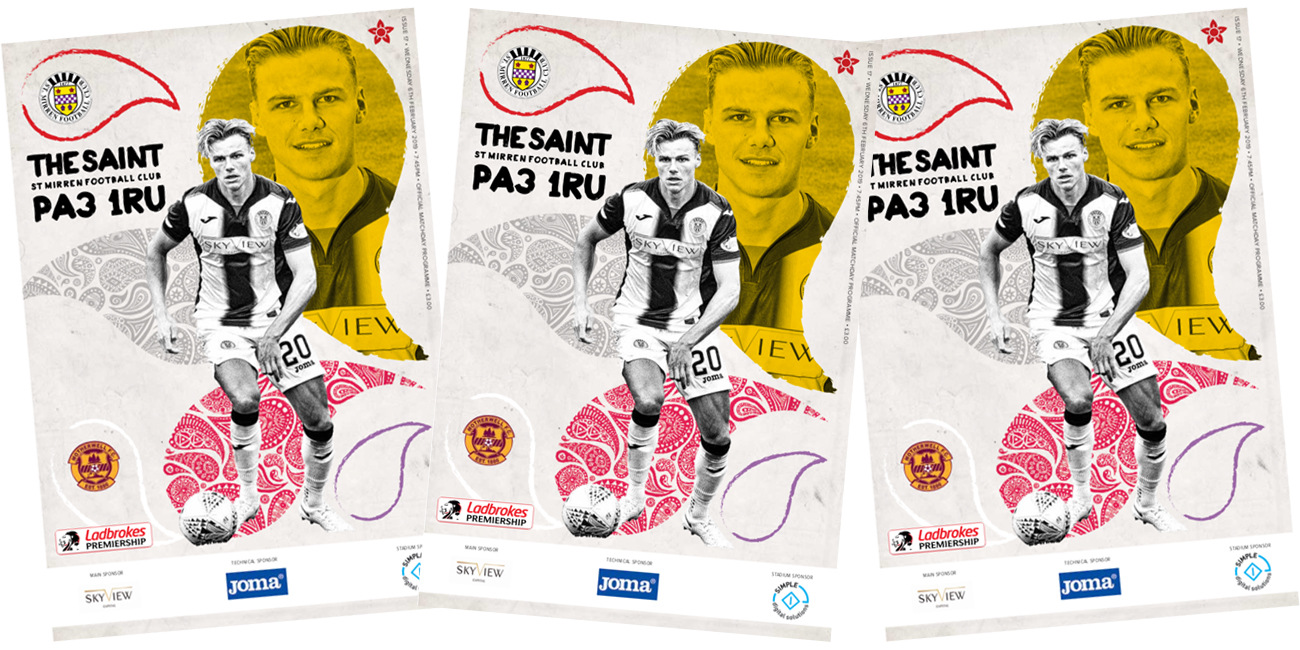 Our match day programme, published in partnership with Curtis Sport, will be available from the Club Shop ahead of Wednesday’s game.

This issue, for the Ladbrokes Premiership fixture against Motherwell, is a 52 pager with a £3 cover price.

This latest edition includes the following:

Front Cover – Cody Cooke.
The Gaffer - Oran Kearney looks back on recent matches and looks ahead to the match against the Steelmen.
Last Time Out – A look back at the recent Premiership match against Hibernian.
The Opposition – Brian Corry runs the rule over Stephen Robinson's Motherwell side.
Matchday Announcements - Bulletin Board of info, dates and events in the world of St Mirren.
Decade of Football at Greenhill Road - St Mirren v Ross County - 29th September 2012 - 9 goal thriller sets stadium record.
St Mirren Greats – David Cochran looks back on the St Mirren career of Frank McDougall.
Matchday Gallery - Pictures from the post match presentations in the corporate suite after the recent home match against Hibernian.
Action Shot (Centre Pages) – Goalkeeper Vaclav Hladky.
Player Kit Sponsors 2018/19 – Check in to see who is sponsoring your favourite player's shirt for the season.
Fans Corner - Ticket prices, travel clubs update, match info and dates for fans to keep in their diary - and Fan's Music Pick!
Premiership Round-Up - The scores, scorers and stats from weeks 22 and 23 in the Ladbrokes Premiership.
Appearances & Goals - The latest squad stats.
Buddies from the Past - Pictorial posers to test your memory.
Paisley Panda's Fun Corner – Some puzzles to keep the youngsters entertained during the half-time break.
Football Bloody Hell – Alan Gallacher chips in his tuppence worth on the debate of who are the world's greatest football icons.
Marketing Matters – Campbell Kennedy updates on the latest events and happenings at the club's Commercial Department.
FlashBack - A pictorial look back at the match between Saints and Motherwell on 21st December 2012.
St Mirren Fixtures & Results 2018/19 – A handy reference page of all the fixtures and results for this season.
Team Lines – The two squads and match officials for Wednesday’s match.

To buy this issue or to place your programme subscription for the 2018/19 season click HERE.