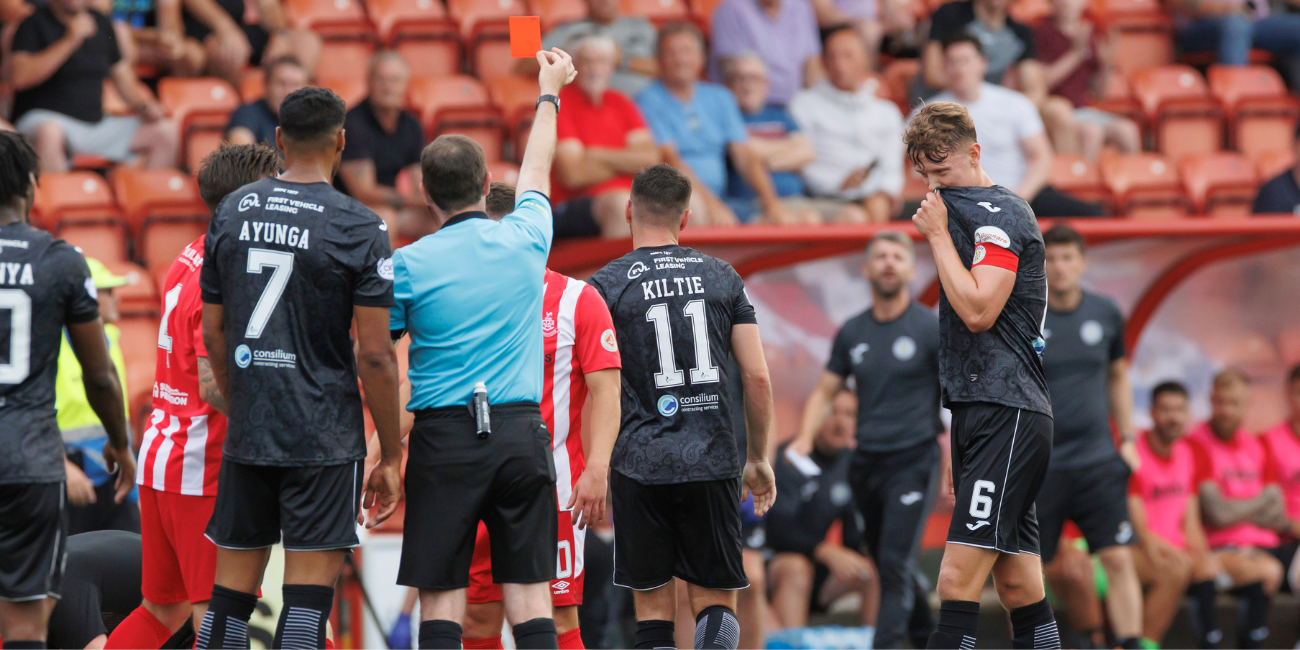 10-men St Mirren exited the Premier Sports Cup after a 2-0 defeat at Airdrieonians.

Saints were reduced to 10-men when Greg Kiltie was shown a red card on 33 minutes and Airdrieonians took full advantage of the extra man with Justin Devenny and Kyan Gunn scoring in the second 45 to secure victory for the Diamonds.

There were four changes to the Saints team that defeated Cowdenbeath on Saturday with Marcus Fraser, Declan Gallagher, Greg Kiltie and Toyosi Olusanya coming in for Ryan Strain, Joe Shaughnessy, Ryan Flynn and Kieran Offord. With Shaughnessy on the bench, Mark O'Hara took the captain's armband.

The Buddies dominated the early proceeding without creating really creating anything to worry Airdrieonians goalkeeper Josh Rae. Initially it was a poor pass-back from a Diamonds player that put the goalkeeper under pressure on 11 minutes. Alex Greive was quick to press the goalkeeper who cannoned the ball off the New Zealand striker before gathering.

Seven minutes later Jonah Ayunga had a decent opportunity to add to his two goals at Cowdenbeath on Saturday. Olusanya's ball across the box was cleared only as far as the Saints forward but he didn't get the connection he would have wanted and the effort was comfortably held by Rae.

Saints were reduced to 10-men when Kiltie was given his marching order for a challenge on Euan Deveney that was high and late.

Despite being down to 10-men the best chance of the half came for Saints on 44 minutes when Greive weaved brilliantly in the box before turning a low strike inches by the post.

The game was a bit more open in the early exchanges of the second 45 with Adam Frizzell going close for the home side in the early minutes of the half when his attempt with the outside of his boot fizzed just wide from 20 yards. Six minutes later a brilliant through ball from Ayunga found Greive on the chase, but the striker's effort was well pushed away by Rae.

Airdrieonians took the lead on 66 minutes with Devenny the first to react to slam home after Callum Smith's shot was blocked.

Joe Shaughnessy and Eamonn Brophy were brought on as Saints looked for a route back into the match, but Airdrieonians extended their lead in the dying moments when Gabby McGill pounced on a pass-back and rolled into substitute Gunn who put the gloss on the win for the Lanarkshire side.