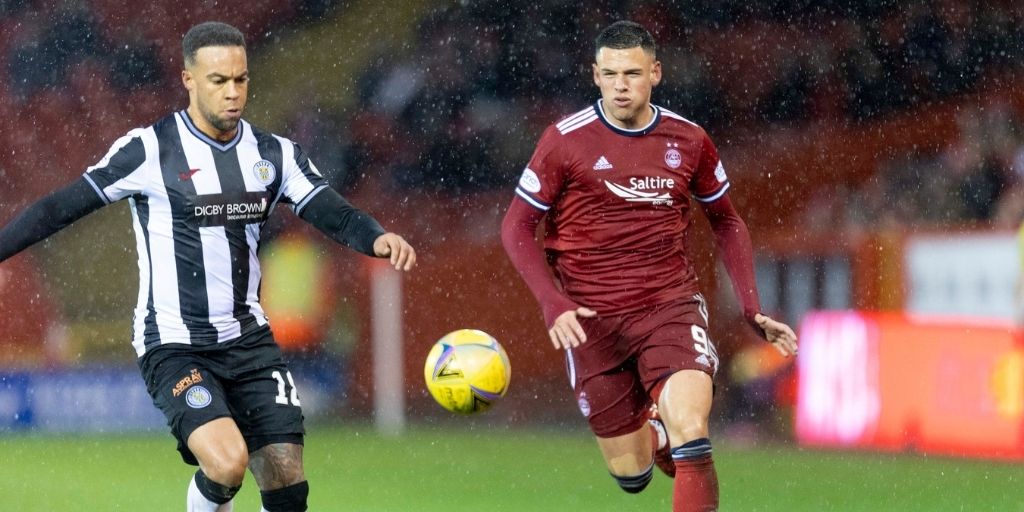 St Mirren were beaten by Aberdeen as the Dons took all three points on a wet and windy day in the Granite city.

Marley Watkins and Christian Ramirez netted early goals to put the home side in control. Scott Tanser pulled one back for Saints before half-time, but Watkins scored again to restore Aberdeen's two goal advantage before half-time. Ramirez would also score his second in the second-half to secure a 4-1 win for the Dons.

Jim Goodwin made three changes from the team that drew 0-0 with Ross County on Wednesday night. Captain Joe Shaughnessy returned for suspension, while Matt Millar and Ryan Flynn also came into the side in place of Richard Tait, Kyle McAllister and Kristian Dennis.

Saints had the first big chance of the match when Eamonn Brophy sprung the offside trap to run through on goal. Aberdeen defender David Bates raced alongside the forward and made an inch perfect challenge to help turn the effort by the post.

But despite that positive start, it was the Dons who took an early lead when Marley Watkins scored on seven minutes. The striker rose the highest to meet a Funso Ojo free-kick and while his initial effort was saved by Jak Alnwick, he reacted quickest on the follow-up to fire home.

And two minutes later the home side doubled their advantage. Jay Emmanuel Thomas' effort was deflected into the path of Ramirez who scooped home from six yards out to put the Dons 2-0 in front after only nine minutes.

Saints could have pulled a goal back on 18 minutes but for Bates again coming to the Dons rescue. Jamie McGrath's cross met an unmarked Millar but the Australian's header was cleared off the line by the Aberdeen defender.

Millar was then twice foiled by Aberdeen goalkeeper Joe Lewis as the Buddies looked for a way back into the match. The stopper turned away Millar's strike after he was sent through by McGrath and then pushed away his header from the resulting corner. In between those chances Saints were forced into a substitution with Curtis Main coming on for the injured Brophy.

The Buddies would pull a goal back when Scott Tanser got on to a low Millar ball to sweep beyond Lewis three minutes before the interval. But less than 60 seconds later the Dons went 3-1 ahead when Watkins scored his second of the afternoon.

St Mirren were denied what looked like a stonewall penalty on 50 minutes when Alan Power was felled in the box. It looked clear-cut, but referee Willie Collum ignored the Saints shouts.

Alnwick made a big save just after the hour mark to keep the scoreline down when he got a strong hand to a low drive from Dons substitute Teddy Jenks. The Saints goalkeeper then made a good double stop to deny Ojo a few minutes later before denying Ryan Hedges with a great block on 69 minutes.

Aberdeen's pressure would tell and they did add a fourth on 71 minutes as Ramirez grabbed his second off the afternoon when he knocked Jenks' ball across the box home from a few yards out to seal a 4-1 win for Stephen Glass' side.