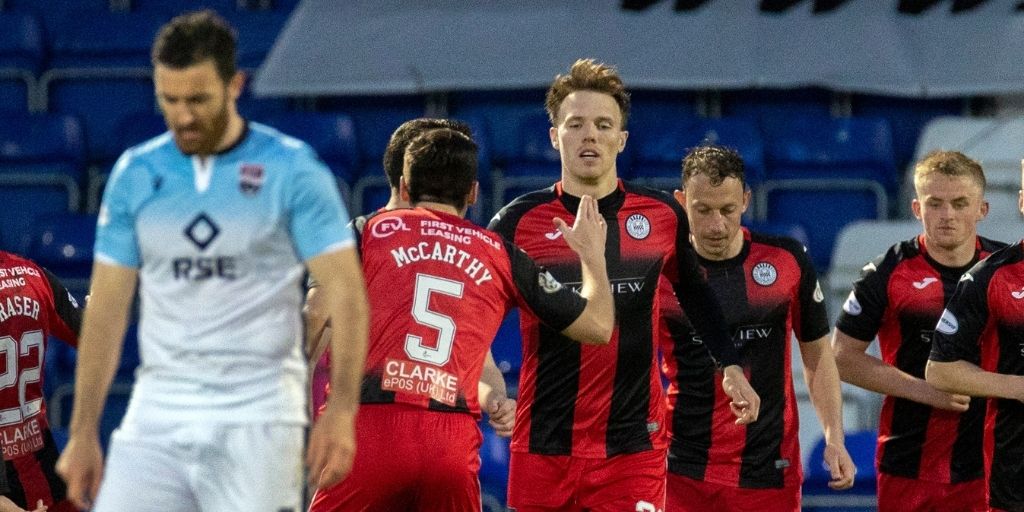 Injury-hit St Mirren picked up three Premiership points after a 3-1 win away to Ross County.

Second-half goals from Lee Erwin, Ilkay Durmus and Jamie McGrath saw the Buddies come from behind to win at the Global Energy Stadium for the second time this season and move the Buddies back into seventh.

Jim Goodwin was without a number of first-team regulars due to injury and handed St Mirren Academy graduate Jay Henderson was handed his first start for the Saints and almost got it off to the perfect start when he touched just wide in the opening two minutes.

The Buddies dominated the opening proceedings - having the bulk of the possession and playing some tidy stuff. A neat passage of play on 12 minutes ended with Erwin bringing the ball in well before laying off for Marcus Fraser who drove over from distance.

But it was the home side who would take the lead with 18 minutes played. The Saints defence couldn't clear their lines from a free-kick which allowed Jordan Tillson to head back into the box where Jordan White flicked beyond Jak Alnwick.

Alnwick was called into action 10 minutes later when he was down quickly to get two strong hands on to a low Michael Gardyne strike from the edge of the box.

County really should have made it 2-0 just after the half-hour mark when ex-Saint Jason Naismith sent a dangerous low cross along the face of goal. Billy McKay was sliding in but couldn't get anything on it to divert it home.

But at 1-0, Saints were still very much in the match and brilliant play from Henderson on the right wing saw the 19-year-old beat his man before sending a wonderful cross on to the head of Kristian Dennis with County goalkeeper Ross Laidlaw at full stretch to save.

With the clock ticking away at the end of the first-half, Alnwick made a wonderful one-handed stop to keep the deficit at one heading into the interval. The goalkeeper was at full-stretch to tip Tillson's strike over.

McKay was a whisker away from doubling County's advantage three minutes after the break. The striker was slipped in by Gardyne and flashes inches wide of the far post.

It was a miss that County would be left to rue as St Mirren levelled two minutes later. Richard Tait's cross from the right was perfect for the onrushing Erwin to bullet home a terrific header to equalise.

Conor McCarthy almost gave St Mirren the lead on the hour mark when he flick from a corner was cleared off the line.

Saints made two changes with a little over 20 minutes to play as Kyle McAllister and Collin Quaner were introduced in place of Henderson and Dennis. The impact told within three minutes as the Buddies would take the lead. A quick counter attack saw Quaner drive forward before sliding a perfect pass across the area to Durmus who slotted low into the far corner.

The win could have been more comfortable for Saints in the end with MacPherson's knocking into the side-netting and curling just wide either side of McAllister cracking the post. But the points were sealed in injury time when McGrath netted his 14th goal of the season from the penalty spot after a handball in the box. The Irishman sent Laidlaw the wrong way to ensure the points.