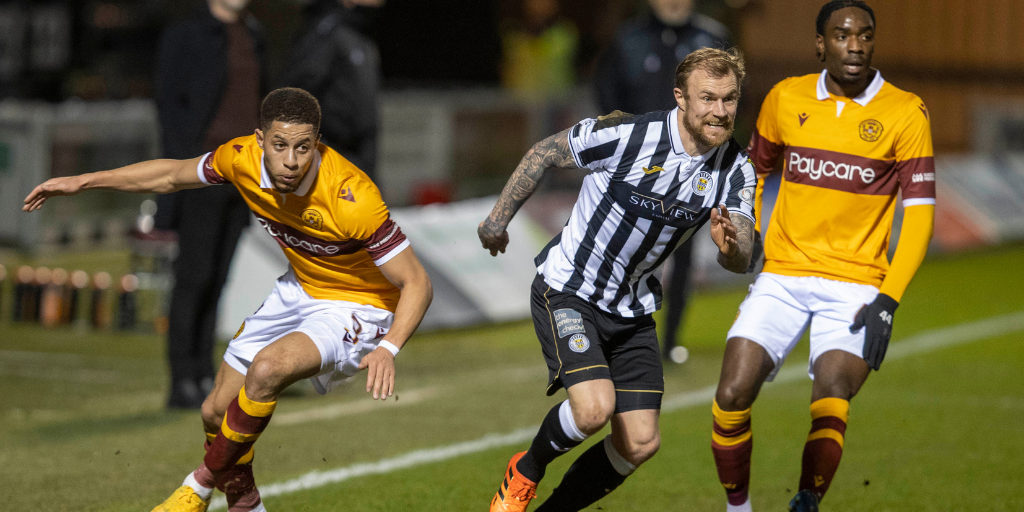 A goalless draw with Motherwell saw St Mirren move two points clear of Dundee United to remain in sixth place with three games to go until the Scottish Premiership split.

Jim Goodwin made two changes to the side that drew 1-1 against Livingston on Saturday with the surprise inclusion of Jake Doyle-Hayes and Jamie McGrath in place on Ryan Flynn and Dylan Connolly.

The first-half was a dreary affair with very little to shout about. Jordan Roberts dragged a shot wide from distance from the visitors on 12 minutes while Joe Shaughnessy headed well wide just after the half-hour mark after getting on the end of a pinpoint McGrath free-kick.

Barry Maguire went closest for the visitors on 35 minutes when his effort from 20 yards was deflected just by. The Steelmen felt they should have had a penalty four minutes later when Tony Watt stayed on his feet after being slightly clipped by Conor McCarthy. The forward played on and moved away from the defender to send a tempting ball across the face of the St Mirren goal with no takers.

A brilliant stop from Motherwell goalkeeper Liam Kelly denied Jon Obika less than a minute into the second-half. McGrath worked the ball wide to Durmus with the Turkish winger picking out Obika in the Motherwell box. The striker took it blisteringly on the half-volley with Kelly doing well to push behind.

The visitors then started to have the better of the second 45. Allan Campbell lashed over after a good move on 53 minutes, before Devante Cole shot straight at Jak Alnwick after wriggling clear of McCarthy.

Saints made two changes to try and turn the game in their favour with Lee Erwin and Kyle McAllister replacing Cammy MacPherson and Richard Tait. But still it was the away side who had the more clear-cut chances. Alnwick had to be alert to deny Cole on 72 minutes and it was the striker who thought he had put Motherwell in front when he got the merest of flicks on a Roberts corner only for it to come off the post.

The Buddies would have one final opportunity themselves in added time, but substitute Kyle McAllister's curling effort from inside the box was deflected over as the Saints had to settle for just a point on the fourth game on the spin.