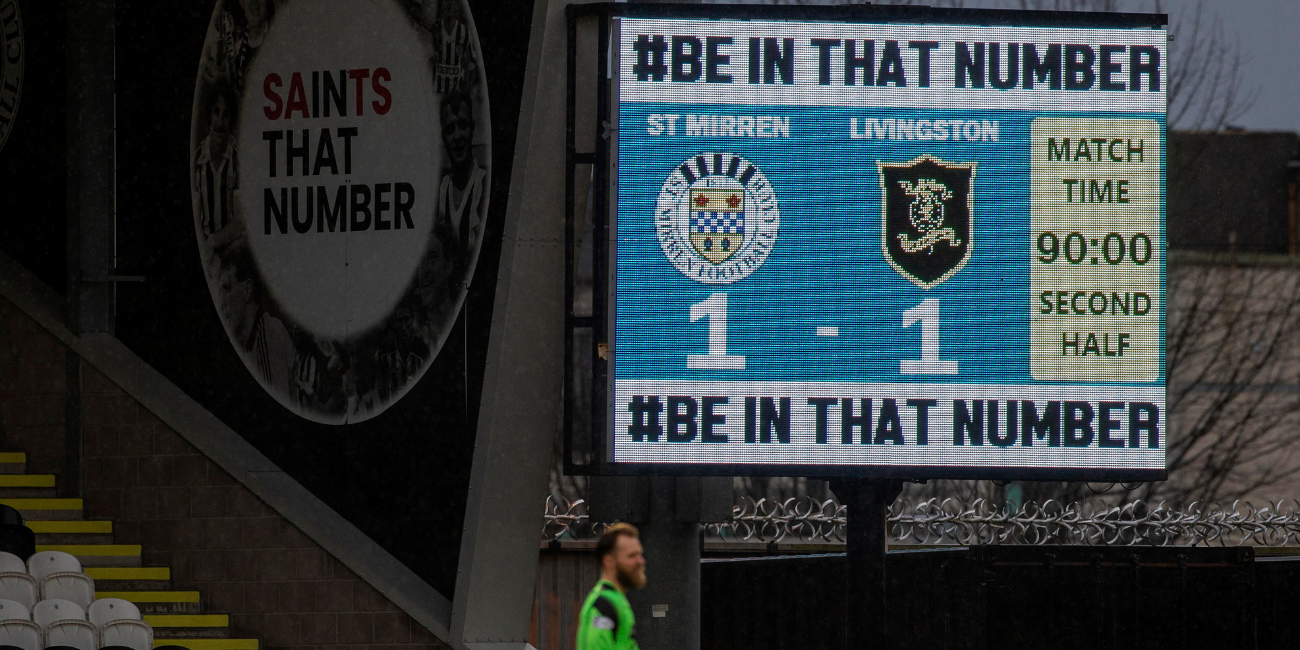 St Mirren drew their third match in a row following a stalemate with Livingston at the SMiSA Stadium.

A Conor McCarthy own-goal gave the visitors an early lead before a stunning Cammy MacPherson goal got Saints level before the break. And 1-1 was how it would finish as Jim Goodwin's side stayed in sixth and moved a point ahead of Dundee United.

The manager made two changes to the side that drew 1-1 with Hamilton Academical on Wednesday with Ryan Flynn and Dylan Connolly in for Kyle McAllister and Lee Erwin.

Saints had started brightly - winning a free-kick in a good area, centrally, 25 yards from goal on three minutes. Ilkay Durmus took as he looked to add to his goal on Wednesday night, but slammed into the wall.

Then, with just seven minutes played, Livingston went in front. It was fortuitous for the visitors as Richard Tait's headed clearance bounced off McCarthy and into the Saints net.

But immediately, St Mirren went in search for a quick equaliser with MacPherson using the horrendous conditions to let fly from distance. It was an awkward one for Livingston goalkeeper Robby McCrorie who just managed to punch clear.

Craig Sibbald then had a go from 20 yards which Jak Alnwick had to get down well to push away on the half-hour mark.

Two minutes later, the Buddies were level thanks to a stunning strike from MacPherson. A good passage of play saw Jon Obika flick the ball on to the Saints Academy graduate who drove forward before cracking into the top corner of the net from 20 yards with his weaker foot.

The conditions were getting the better of the match in the second-half with swirling wind and rain making it difficult for either side to get the ball down and play. It took until the last 10 minutes of the game for Saints to really exert pressure in search of a winner.

Lee Erwin, who came on for the goalscorer, did brilliantly to nod down a Marcus Fraser pass into the path of fellow substitute Kyle McAllister. The number 10 had his shot blocked by a Livi defender. It then fell to Durmus whose hit was deflected over by Efe Ambrose.

A minute later McCrorie was forced into a stop from Tait's powerful effort from the edge of the area. The 'keeper couldn't take it at the first attempt but managed to smother before Erwin could get on the end of it.