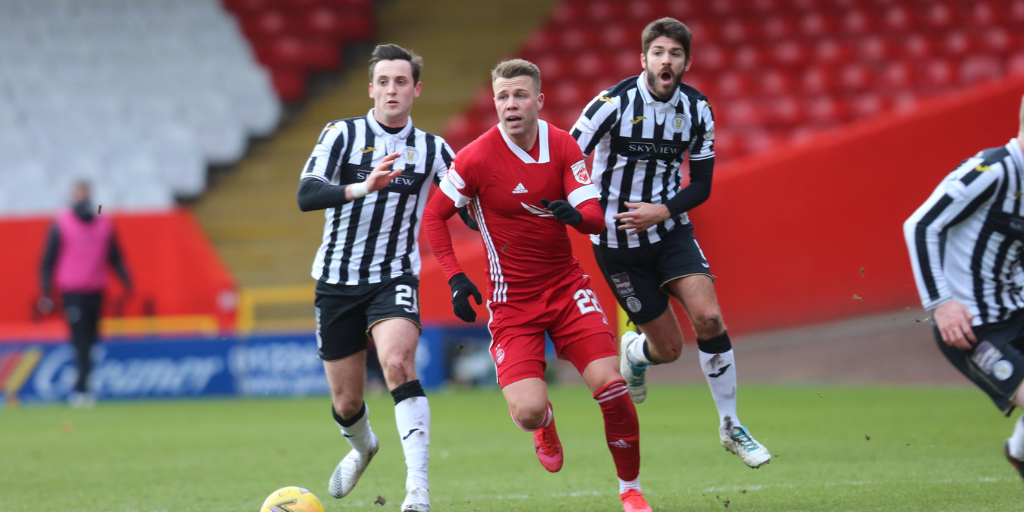 Neither side could be separated at a blustery Pittodrie this afternoon as Saints drew 0-0 with Aberdeen.

The windy conditions in the Granite City made it tough for each side with very few real opportunities throughout the 90 minutes as it ended in stalemate.

It was Saints who had the best chance of the match and it came early doors with Ryan Flynn going close to scoring his first goal in almost two years on eight minutes. The midfielder was in the right place inside the box to meet Ilkay Durmus' cross from the left. He got his foot to it only for Aberdeen goalkeeper Joe Lewis to instinctively block the side-footed effort at the near post.

The wind was wreaking havoc at Pittodrie but it almost came to St Mirren's benefit on 21 minutes. It caught Durmus' free-kick from the right and forced Lewis to tip over the bar as it looked like it might sneak in.

Chances were limited for both sides with a low Florian Kamberi strike from 30 yards, which was well held by Jak Alnwick, the best the home side had to show in the first-half.

Saints were forced into a change at the break when Cammy MacPherson was introduced in place of the injured Jake Doyle-Hayes who is expected to have an x-ray later this evening to reveal the extent of the damage.

The second-half followed the same sort of rhythm as the first with the wind not allowing either side to create many chances. Fraser Hornby curled a free-kick wide from 25 yards on 54 minutes, while substitute Jon Obika volleyed over from the edge of the box with 12 minutes remaining.

The Buddies were probing in the difficult conditions and did look the more likely as they searched for a winner in the last 10 minutes. Kyle McAllister's free-kick centrally from distance was straight down the throat of Lewis before the goalkeeper made tremendous stop to deny Obika at the far post after the Saints forward had met a MacPherson free-kick. It wouldn't have counted however as referee Euan Anderson deemed the ball came off the hand of the striker.

In the end a point was probably a fair result for both sides with Saints still in the hunt for a top six place.