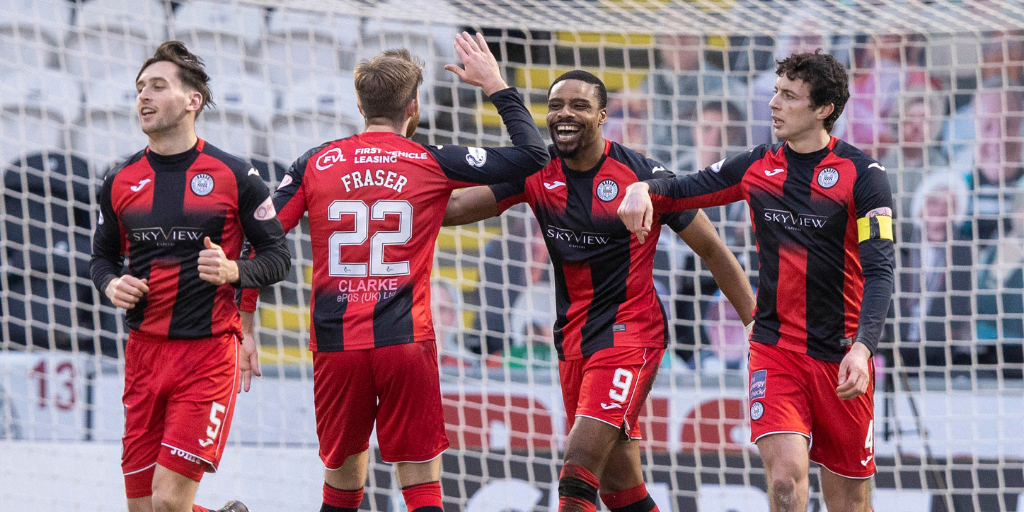 Kyle McAlister’s first goal of the season helped the Buddies return to winning ways as they recorded a comfortable 2-0 victory against Kilmarnock at the SMiSA Stadium. McAlister’s first-half header was followed up by an opportunistic Jon Obika strike as the Paisley Saints inflicted a fifth-straight league defeat on Kilmarnock.

The visitors had the first real chance of the game in seven minutes when Greg Kiltie slipped the ball through the Buddies defence for Danny Whitehall but he dragged his shot wide of Dean Lyness’s goal.

Deputising for the suspended Jak Alnwick, Lyness was rarely troubled throughout with a well-timed header from the keeper denying Colin Doyle what would have been the definition of a route one goal.

Saints grew more into the game as the half wore on as McAllister and Jamie McGrath both saw efforts from 25 yards saved by Doyle.

After McAllister fired wide from 10 yards on 25 minutes, he made sure he wouldn’t miss second time round rising perfectly to head home from a similar range 13 minutes later to break the deadlock.

It could have been two just before half time when Jamie McGrath was played through but Doyle was quick off the mark to close him down and make the save.

Killie started the second half well, winning the first corner of the match before Alan Power’s effort from the edge of the box was blocked.

On the hour mark – and moments after he thought he’d been fouled in the box – Jon Obika made a nuisance of himself, leaving Power with egg on his face, as he robbed the midfielder in the box and coolly slotted the ball home for 2-0.

If anything summed up that it just wasn’t to be Kilmarnock’s day, it was a corner on 70 minutes. The initial ball in was headed only as far clear as Power on the edge of the box where he twice and Gary Dicker once had shots blocked with the Buddies prepared to put their bodies on the line to protect the clean sheet.

As Saints looked to see the game out, captain Joe Shaughnessy almost put the cherry on top of the cake from a corner on 88 minutes but he put the ball over the bar.