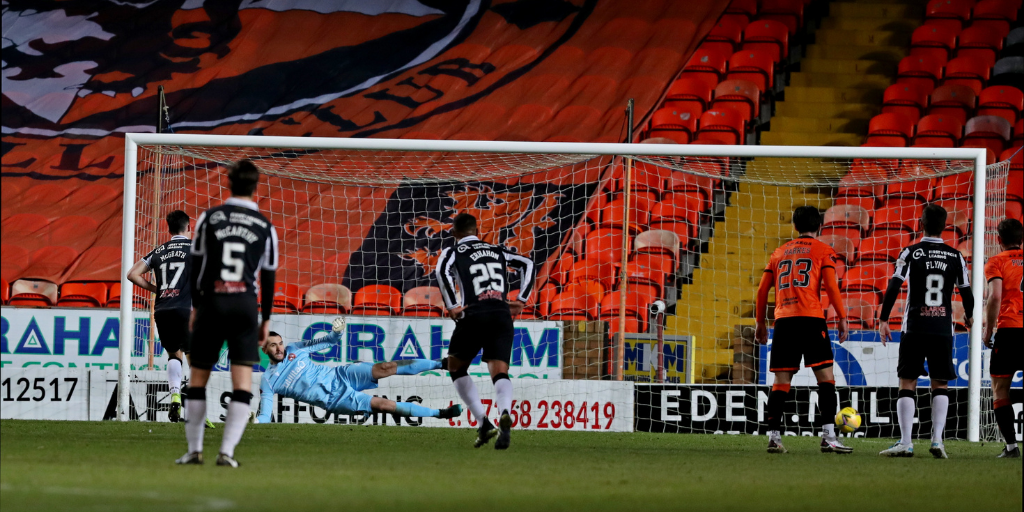 St Mirren picked up their first win of 2021 and did it in style as the Buddies thumped five past Dundee United at Tannadice.

Joe Shaughnessy's first goal of the season put Saints ahead on the half-hour mark before two penalties in three minutes from Jamie McGrath had Jim Goodwin's men cruising at the break.

Ian Harkes pulled a goal back for the home side with a stunning strike, but two goals in the last 10 minute from substitutes Dylan Connolly and Kristian Dennis sealed a stunning win in Dundee.

The manager made three changes from Sunday's semi-final loss with Ilkay Durmus and Jon Obika in, while Ryan Flynn made his first start in almost a year.

The Buddies had plenty of pressure in the opening 20 minutes without creating anything clear cut. Brophy snapped a shot wide in the opening minute, while there were strong shouts for a Saints penalty on even minutes with a number of players claiming the ball struck a United hand.

It was United who had the best opportunity of the match on 23 minutes when Dillon Powers was denied by a wonderful save from Jak Alnwick before slamming over.

Dundee United were furious to be denied a penalty just before the half-hour mark when Marc McNulty went down under the challenge from Richard Tait after the defender had got in front of the forward and knocked the ball away with a well-time challenge. Referee John Beaton rightly said no and within a minute Saints were ahead. Jamie McGrath's free-kick from the left was met by Conor McCarthy who nodded into the path of Joe Shaughnessy with the captain heading home to score his first goal for St Mirren.

Saints were awarded a penalty with three minutes of the half remaining when Shaughnessy went down under a challenge in the box from Mark Connolly. McGrath took and he made no mistake to role home his fourth penalty of the season. And into the final minute of the half Saints were given another penalty after a Flynn strike came off the hand of Lawrence Shankland. Again McGrath stepped up and again the Irish midfielder scored to make it nine goals for the season.

United pulled a goal back early in the second half to reduce the arrears. It was a terrific strike from American midfielder Harkes who curled into the top corner from range leaving Alnwick with no chance.

But the St Mirren players put in a real professional performance to keep the home side at bay before adding the sheen on a top performance with two late goals.

On 80 minutes, Dennis lifted the ball over the top for substitute Dylan Connolly to race on to. The winger drove into the box slammed into the net to secure the points for Saints.

And the cherry was put on the cake for the Buddies when Dennis got himself on the scoresheet with five minutes remaining. It was all about the work of the returning Flynn who showed his class as he picked the ball up on the halfway line, drove along the left touchline before breaking into the box and finding the English striker at the far post to tap home on a good night's work for Saints.