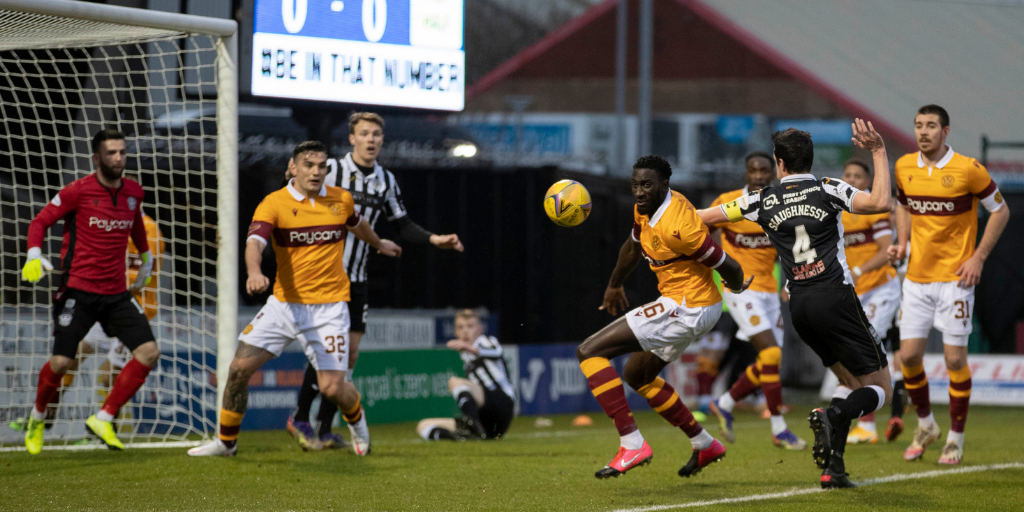 Neither side could be separated in St Mirren's first home match of 2021 as Jamie McGrath's late penalty earned Saints a share of the spoils against Motherwell.

The Irishman made it seven goals for the season when he netted from 12 yards 11 minutes from time after Devante Cole had given the visitors a first-half lead.

Both sides pressed for a winner in the closing stages but had to settle for a point.

Motherwell came into the match with Graham Alexander having been named as their new manager on Thursday night. And the visitors had clearly been given a lift by his appointment as they started brightly at the SMiSA Stadium.

Saints grew into the match with Marcus Fraser volleying wide from 15 yards on 11 minutes before McGrath, who scored the winner the last time these sides met, went close to breaking the deadlock on 14 minutes when he drilled wide from 20 yards.

Lee Erwin and Kyle McAllister then both dragged wide from outside the area in the next couple of minutes as Saints went in search of the opener.

But Motherwell started to take a grip on the first-half and should have been ahead on 22 minutes when Liam Polworth's pinpoint cross met the head of an unmarked Tony Watt who had his header brilliantly blocked by Jak Alnwick.

Three minutes later Cole fired wide from just inside the box and would have been disappointed not to have hit the target.

But Motherwell did go ahead on 27 minutes with Cole atoning for his miss. Saints couldn't clear a Polworth corner which allowed Watt to nod back across with Cole firing home from close range.

Dylan Connolly was picked up by Erwin who played a wonderful through ball for the winger, but his goal-bound effort was blocked by Stephen O'Donnell six minutes before the break.

Saints were looking better in the second-half and should have been level just after the hour mark. McGrath did brilliantly to pick out Ethan Erhahon in the Motherwell box but the midfielder sent it agonisingly wide of the left-hand post.

Heading into the final 10 minutes Jim Goodwin's men were awarded a penalty when Erwin went down challenge of Declan Gallagher. Referee Bobby Madden to point to the spot with McGrath stepping up and making no mistake from 12 yards to draw Saints level.

Both goalkeepers ensured that neither side would take three points from the game with Kelly saving well from an Ilkay Durmus free-kick, before Alnwick made an unbelievable stop to tip away O'Hara's free-kick attempt.