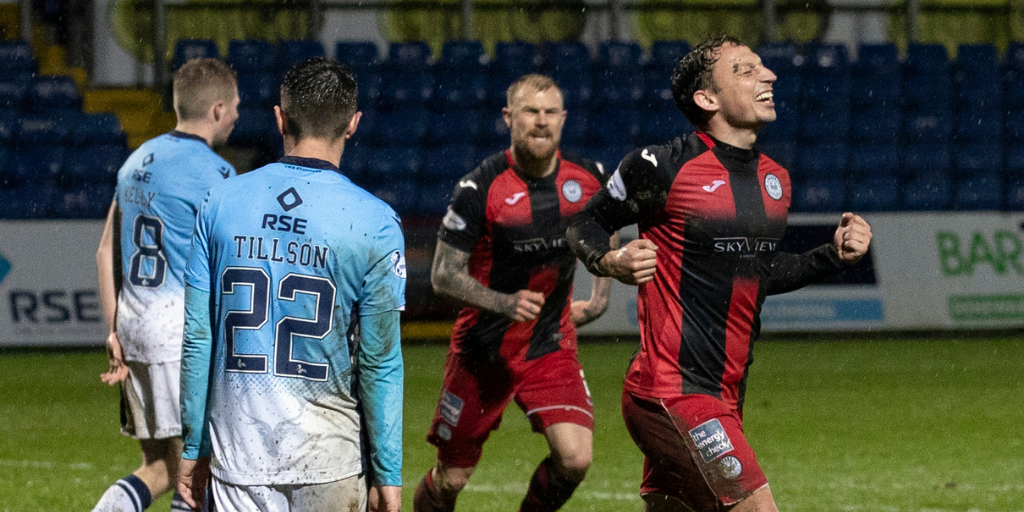 Saints came away from a rainy Dingwall with a late Christmas present as goals from Marcus Fraser and Kristian Dennis gave the Buddies a 2-0 win over nine-men Ross County.

Jim Goodwin's men were made to work for the points despite their advantage with County defending well until Fraser opened the scoring against his former club. The win made it three out of their last four on the road in the Scottish Premiership with Saints now sitting in seventh place on 21 points.

It was the home side who started brightly after taking kick-off. John Hughes' men created an opportunity within the first 30 seconds of the match with Ross Draper driving a low effort into the arms of Jak Alnwick from just inside the area.

The goalkeeper was called into action again on four minutes when he made two terrific one-handed saves to deny County the opener. The first saw Alnwick react well to turn away a deflection off Conor McCarthy, with Ethan Erhahon on the line to head away. The ball came back in with Alex Iacovitti heading goal-ward only for Alnwick again to flick over.

Saints didn't get going in the opening stages and it was County who threatened again on 13 minutes when Jermaine Hylton found Stephen Kelly in space on the edge of the box. The on-loan defender took it first time but dragged well wide.

The Buddies grew into the game after a frustrating opening. Josh Reid was booked for the hosts when he pulled back Kyle McAllister on 17 minutes. The winger had a go from the resulting free-kick, but it cannoned off the wall.

Junior Morias had Saints best chance just before the half hour mark. The forward met a neat Erhahon flick and drove forward before unleashing a shot from 30 yards which Ross County goalkeeper Ross Laidlaw gathered at the second attempt. Less than later Jermaine Hylton did likewise for the home side with Alnwick pushing away with his chest.

County were reduced to 10 men when Reid was given a second yellow card for another foul on McAllister. McGrath floated the free-kick in where it met the head of Lee Erwin who glanced wide.

Saints started the second-half well with ex-County player Marcus Fraser volleying just wide two minutes into the second 45. The defender didn't get the connection he would have wanted as he sclaffed just by Ross Laidlaw's left-hand post.

Despite seeing plenty of the ball, St Mirren weren't creating any real clear cut opportunities to open the scoring which prompted manager Jim Goodwin to bring on Jon Obika and Ilkay Durmus on for Erwin and McAllister.

Ross County were then down to nine men on the hour mark when Ross Draper was shown consecutive yellow cards. The midfielder was initially booked for a foul on Erhahon before being given another yellow for pushing the Saints midfielder in the aftermath.

As was to be expected coming up against nine men Saints pressed and pressed but still were unable to test Laidlaw. The manager made another double substitution by introducing Cammy MacPherson and Kristian Dennis in place of Erhahon and McGrath.

The Buddies continued to push for the opener with 20 minutes remaining. Durmus had a free-kick from 25 yards pushed away by Laidlaw, while Joe Shaughnessy knocked inches wide after getting on the end of Dennis' header across.

The breakthrough would finally come for St Mirren on 76 minutes when Fraser scored on his return to Dingwall. The defender was first to a County clearance and lashed home, via a deflection, from the edge of the area.

Saints were almost two to the good a minute later when Tait rose to meet a cross only to see his header well saved by Laidlaw.

It was all St Mirren in the closing stages and the Buddies put the seal on a good afternoon's work when Dennis nodded home from close range to score his first Saints goal and ensure the points would return to Paisley.