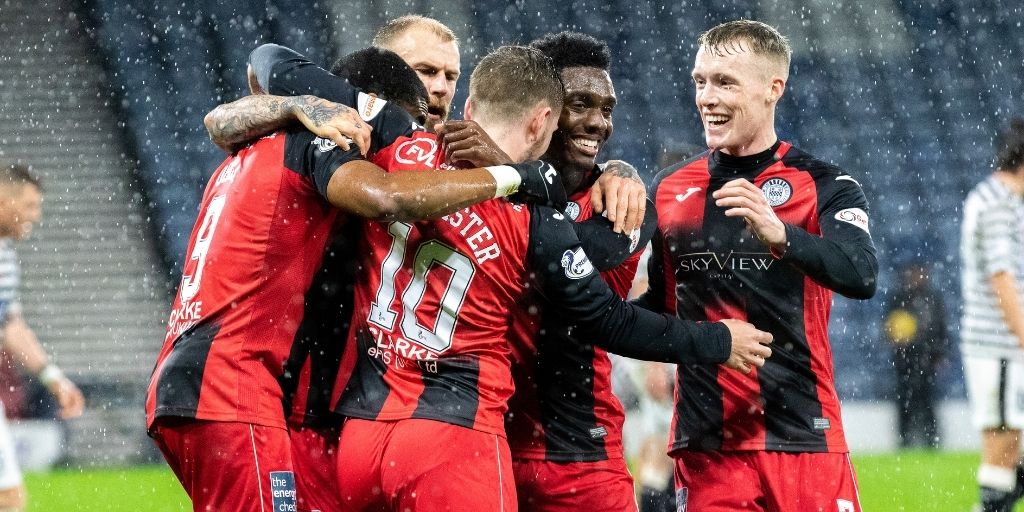 St Mirren finished top of Betfred Cup Group G and qualified for the second-round after a late Jon Obika goal secured a 1-0 win over Queen's Park at Hampden.

The Saints number nine rose the highest to get his head on the end of a Kyle McAllister corner to nod home his fifth goal of the season and put the Buddies in the hat for tomorrow's draw.

Jim Goodwin made five changes from the side that drew with Morton on Wednesday night as Jamie McGrath, Jake Doyle-Hayes, Cammy MacPherson, Dylan Connolly and Kristian Dennis came in for Brandon Mason, Sam Foley, McAllister, Junior Morias and Obika.

Saints knew a drew would secure a place in the next round but it was the home side who, immediately from kick-off, tested Jak Alwnick with the goalkeeper having to push away Bob McHugh's strike from the edge of the area inside the first 15 seconds.

St Mirren's first real opportunity came on 20 minutes when Marcus Fraser expertly picked out Kristian Dennis. The forward got his head on it but nodded just wide of Willie Muir's right-hand post.

Fraser was linking up well with Richard Tait down the right and it was the former who created the next chance for Saints five minutes later. His low ball across the area found Cammy MacPherson just inside the Queen's Park box but the midfielder blazed over.

Peter Grant headed a dangerous ball across the face of the Saints box as time ticked away in what was a pretty quiet first 45.

Jim Goodwin responded to that first-half performance by bringing Brandon Mason on in place of Cammy MacPherson at the interval. But Saints were dealt a major blow just three minutes into the second-half when Joe Shaughnessy was shown a straight red for a foul on Michael Doyle.

Queen's Park should have capitalised on their man advantage five minutes later. Forward McHugh was picked out at the back post but, unmarked, he nodded straight into the arms of Alnwick.

With a little over 20 minutes remaining Jim Goodwin made a double sub to try and spark Saints into life. On came Kyle McAllister as well as Ryan Flynn who made his return to action for the first time since February.

McAllister's introduction seemed to have the desired effect. He had a terrific chance to open with scoring with just 12 minutes of the game remaining when he found himself through on goal. However, the number 10's low strike was blocked by the feet of Muir.

With just nine minutes remaining Saints found the breakthrough when, for the second time this week, Obika got his head on a McAllister corner to  home.

Saints will be unseeded in tomorrow's second-round draw which takes place live on Premier Sports following the match between Hibernian and Dundee.