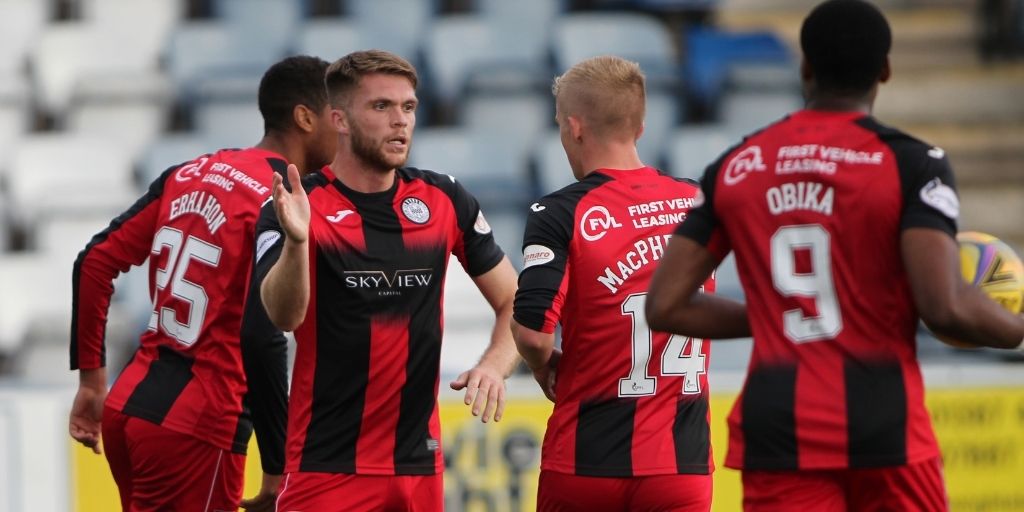 Saints fought back from a disastrous start at Palmerston to draw with Queen of the South before picking up a bonus point in the penalty shoot-out.

Jamie McGrath halved the gap early in the second half when his free-kick found the net without appearing to touch anyone. There was plenty of time to find an equaliser but it didn't look as if it would come until, in the final minute, Marcus Fraser headed in his first Buddies goal to force a penalty shoot-out.

The lack of fans meant a lot of the normal drama and tension was missing but Queens were always up against it after missing their first two spot-kicks, Saints converting all of theirs to pick up the extra point.

Saints may have beaten Partick Thistle during the week but that didn't stop manager Jim Goodwin making three changes, Sam Foley, Kyle McAllister and Ilkay Durmus being handed starts at the expense of Jon Obika, Junior Morias and Cammy MacPherson, who were on the bench. The ever-dangerous Stephen Dobbie led the home attack with former Saint Gregor Buchanan in the defence.

Dobbie went close to opening the scoring after just five minutes, drawing a good save from Jak Alnwick after he connected well with Shields' cutback. However, the warning wasn't heeded and moments later Shields nicked the ball from Richard Tait midway inside the Saints half and he powered forward before thumping the ball across Alnwick into the far corner to put Queens in front.

The bad start got even worse five minutes later. McGrath lost possession to Fitzpatrick and some a few slick passes put the on-loan Norwich man through on goal, Alnwick having no chance as the winger fired past him.

Saints had found themselves in this sort of position at Palmerston just before Christmas in 2017 and went on to win, however a similar fightback looked pretty unlikely at this stage. They did begin to enjoy some more possession but did little with it and Queens goalie Rohan Ferguson wasn't unduly troubled. Indeed, the Doonhamers could have moved even further ahead when Ayo Obileye was left unmarked at Joe McKee's corner but he headed wide.

Saints finally threatened in the final 10 minutes of the half. McAllister was desperately unlucky to see his fantastic free-kick rattle the post, Ferguson producing a good save to tip Fraser's follow up header over the bar. Another chance came from the corner, the unmarked Sam Foley failing to find the target with his header.

Obika replaced Nathan Sheron at the break but things almost got worse for Saints when Foley was short with his backpass, Alnwick booting the ball then Dobbie as he bailed his skipper out of trouble. The Buddies made the most of that let-off by reducing the deficit within seconds, McGrath floating a free-kick into the box that sailed into the net after seeming to be missed by everyone.

Dobbie dragged a shot wide as he tried to restore the hosts' two goal advantage before Saints almost drew themselves level, Ferguson producing a great save to keep out Joe Shaughnessy's header. The Buddies looked a much improved side as they looked to get themselves back on level terms, however were almost back to square one when Shields was left in too much space on the left and he found Fitzpatrick, whose shot was blocked by the legs of Tait. The defender showed he could be effective at the other end too when he prodded a corner towards goal, one of his team-mates unintentionally helping it over the bar with Ferguson beaten.

The next goal was going to be crucial, Fitzpatrick shooting wide from close range and Euan East seeing his shot deflected behind after he took advantage of a Fraser slip. The corner provided more problems, Dobbie's shot being blocked on the line before Alnwick saved from James Maxwell. Another chance came Dobbie's way a few minutes later but it was a tight angle and he volleyed wide.

The brief flurry of chances after McGrath's goal proved to be a false dawn, although the Irishman had a penalty shout turned down when his shot appeared to hit the arm of a Queens defender. As the clock ticked down, it seemed the well-organised home defence would hold out but with just seconds remaining, Ethan Erhahon produced a wonderful cross that found Fraser and he looped a header over Ferguson to bring the Buddies level.

With penalties looming, Saints almost snatched a winner deep into stoppage time, Cammy MacPherson drawing a fine save from Ferguson after being set-up by fellow sub Junior Morias. With a draw earning both sides a point, it was on to the shoot-out and this time it was Queens who started poorly as they missed their first two penalties, the next six being converted to give the Buddies an extra point.