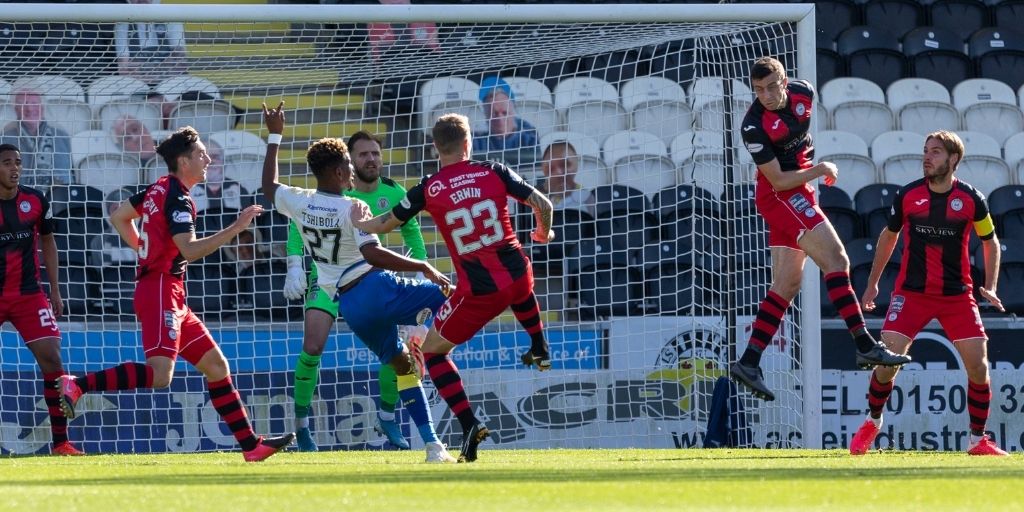 Saints' disappointing run of form continued as Kilmarnock consigned them to a fifth successive defeat at a sun-soaked Paisley.

The decisive moment came as the half hour mark approached, Killie making their possession dominance count when Chris Burke's cross was converted by Nicke Kabamba.

Lee Erwin had hit the bar for Saints before the goal but the hosts rarely looked like finding an equaliser, while the returning Jak Alnwick had a fairly quiet game at the other end aside from a fine stop from Ross Millen early in the second half.

Alnwick was one of four changes made to the side that lost at Tannadice a week ago, with Junior Morias, Ilkay Durmus and Cammy MacPherson also coming into the side. That meant Jon Obika and Kyle McAllister dropped to the bench, with Richard Tait suspended. The Killie defence was packed with former Buddies including goalie Danny Rogers and defenders Kirk Broadfoot, while Andy Millen was in the technical area with son Ross on the field.

Killie had plenty of possession in the opening quarter but it was Saints who had the better of the chances. When a visiting corner was cleared to Morias, he released but he perhaps let the angle get a bit too tight before dragging a shot wide of the far post. The winger was the provider for the Buddies' next opportunity as his corner found Erwin and his header appeared to be tipped onto the bar by Rogers, however the officials gave a goal-kick.

Kilmarnock's crosses had been causing a few problems for the Saints defence and it was from one of those that they took the lead. The ball was worked out wide to Burke and when he put it into the danger area Kabamba was there to sweep home. Saints tried to respond and Rogers failed to hold Jamie McGrath's corner but Joe Shaughnessy poked the loose ball over the bar. The Ayrshire side had a chance to double their lead just before the break but Burke curled his free-kick from the edge of the box well over the bar.

Jim Goodwin made a double change at the break, Obika and Nathan Sheron coming on for Foley and McGrath. Before they could do anything, the visitors nearly added a second, Millen finding Greg Kiltie and his shot was superbly tipped behind by Alnwick, the goalie comfortably dealing with Broadfoot's header from the corner that followed.

Marcus Fraser was then perhaps a bit fortunate to escape with a yellow card when he caught Millen in the chest with his studs, the contact unintentional as the Saints fullback tried to bring the ball under control.

Dylan Connolly replaced Durmus as the hour mark approached and the change did give Saints a bit more attacking intent but chances were few and far between at both ends. McAllister replaced Ethan Erhahon for the final 10 minutes and Saints had a penalty shout turned down soon after when Broadfoot clearly caught Shaughnessy as they jostled at a corner, however ref David Munro was unmoved.

In stoppage time, Connolly did well to dig out a cross but neither Obika or Morias were able to connect and any hope of salvaging a point was gone.