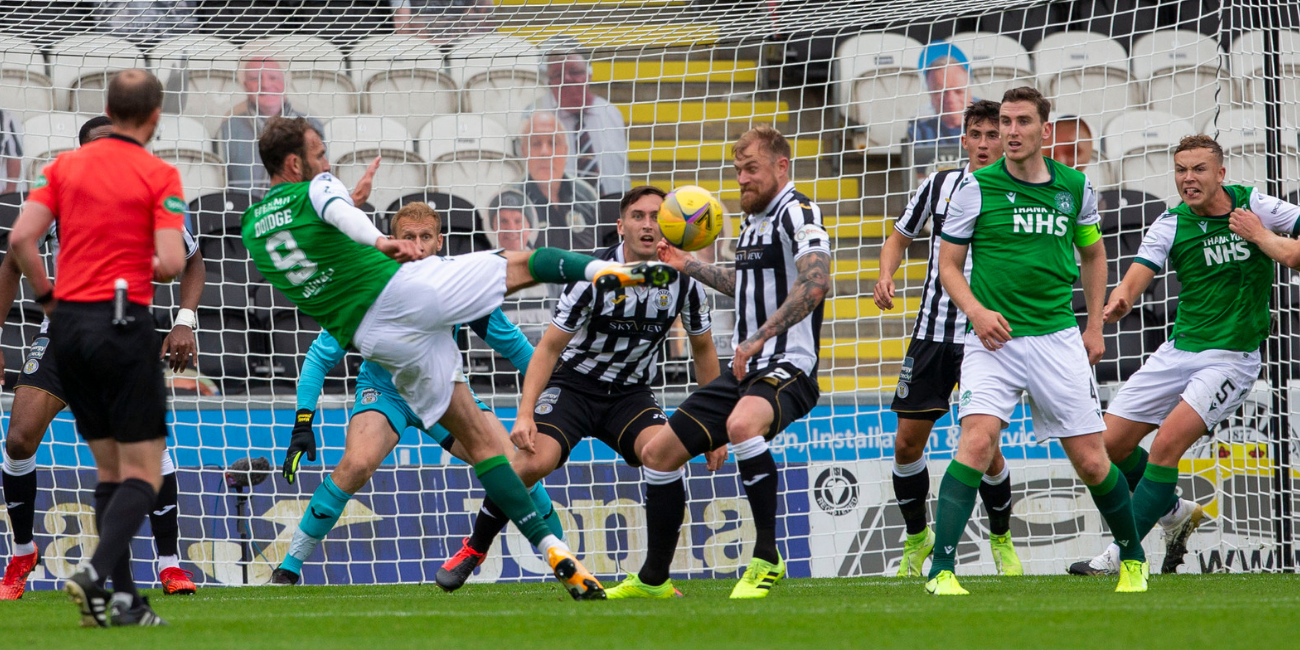 A difficult week for Saints came to a forgettable end as they lost to Hibs in Paisley.

With coronavirus meaning Saints' three signed goalies were unavailable, Zdenek 'Bobby' Zlamal was signed on loan from Hearts hours before kick-off. Hibs opened the scoring when deflections off Sam Foley and Kevin Nesbit took the ball under Zlamal and they quickly added a second through Joe Newell.

There was some improvement from Saints after that and they made a decent start to the second half, however any hope of a comeback was wiped out when Zlamal failed to deal with a cross and Martin Boyle headed in at the backpost.

The keeper was one of three changes to the Saints side who had lost in Perth a fortnight ago. There was a first start for recent arrival Kristian Dennis and a rare outing for Ethan Erhahon, making his first start for the senior side in more than a year. Junior Morias and Kyle McAllister were the outfield duo dropping to the bench, where they joined new signing Lee Erwin and 40-year-old goalie coach Jamie Langfield. Former Buddies boss Jack Ross included ex-Saint Paul McGinn in his team with Stevie Mallan and Darren McGregor among the subs.

Hibs lined up with plenty of attacking intent, Boyle causing the early problems. A great tackle from Richard Tait stopped him getting a shot away from a decent position and the next time he got in behind, Zlamal did enough to put him off. The forward was to prove more effective in Hibs' next attack, collecting Christian Doidge's crossfield pass before finding McGinn, who sent a dangerous cross into the middle that hit off Foley then Nisbet before trickling into the net.

Before Saints could respond, they were two down. Once again Boyle was involved as he teed up Newell and he curled past Zlamal from the edge of the box. Saints were aggrieved not to be given a penalty when Ryan Porteous handled inside the box, ref Willie Collum having none of it. As Hibs pushed for a third, Josh Doig fired in a shot that looked to be bending into the bottom corner before it was blocked by a Saints defender.

The Buddies finally had a shot when a corner was only cleared as far as Sheron but he fired over from distance, with Dennis then being crowded out as he tried to shoot. Hibs still looked the more dangerous and when they countered, Nisbet looked to have shot well wide before a deflection almost spun the ball into the opposite corner with Zlamal stranded. Ofir Marciano had been a virtual spectator in the Hibs goal but proved his worth twice just before the break. Ilkay Durmus drew a great save with a fine free-kick and when the ball was crossed played back in, Marcus Fraser nodded it down for Sheron to thump towards goal only for Marciano to palm it away.

Erwin was handed his Buddies debut at the break as he replaced Dennis. Zlamal came out to save from Nisbet after he'd got the better of Foley before Erwin had a chance to reduce the deficit, shooting over from the edge of the box after a great pass from Conor McCarthy. Just as Saints were beginning to pose a few questions of the Hibs defence, the visitors put the game to bed. Newell delivered a cross to the back post and Zlamal missed it, Boyle nodding home.

The forward went close to adding a fourth soon after the restart, Zlamal saving his shot well, before Saints sub Dylan Connolly curled a shot over at the other end. Another sub, Kyle McAllister, had a free-kick deflected over as the Buddies pressed for a consolation, Marciano producing a good save to keep out Cammy MacPherson's powerful effort shortly after he'd replaced Jamie McGrath, the last real chance either side had.