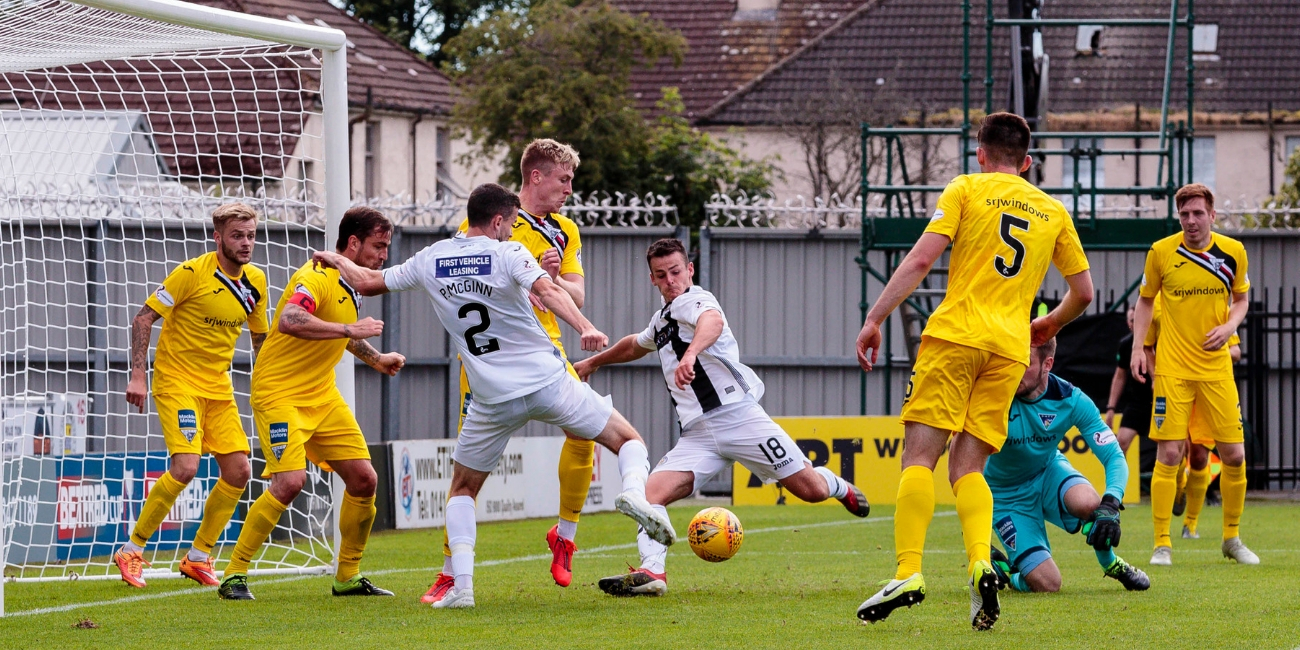 It was a frustrating start to the Jim Goodwin era as Saints lost 3-2 to Dunfermline in their opening Betfred Cup group game.

The Pars were in front inside 20 minutes as Ryan Dow shot past Vaclav Hladky and soon after they were two clear when Andy Ryan found the net with a fine finish. Incredibly, things got even worse before the break as Ryan hit the post and Tom Beadling followed in to score the rebound to seemingly finish things off.

It wasn't until just after the hour mark that Saints finally showed signs of life as the scored twice in quick succession. First, Coody Cooke curled a shot past goalie Ryan Scully from the edge of the area, then Danny Mullen pounced after the Pars keeper fluffed his lines at a corner to cut the gap to one. However, they were unable to find the equaliser that would have taken the game to penalties.

Dow fired an early warning that obviously wasn't heeded as he got in behind the home defence before forcing a good save from Hladky. Saints threatened for the first time when Ryan Flynn's looping cross was fumbled by Scully before the goalie recovered in time to block Kyle Magennis effort. A few minutes later Cooke volleyed off target from Ethan Erhahon's cross but any hope that Saints were clicking in to gear was about to be extinguished in dramatic fashion.

The Buddies lost possession in the middle of the park and Josh Coley pounced, wriggling himself free of his man before sliding a pass through for Dow just before he was wiped out. Once again Dow was in acres of space and this time he made no mistake, slotting the ball into the bottom corner to put Dunfermline in front.

It took six minutes for things to go from bad to worse. This time Kevin Nisbet won the ball in midfield and he found Ryan with a great pass, the striker clinically curling past Hladky to double the Pars' advantage.

Paul McGinn blazed an ambitious effort well off target as Saints tried to react, Tony Andreu rattling a shot into the midriff of a Pars defender. Dunfermline could then have moved further in front as Coley once again caused problems and found Ryan, but the striker didn't show the same composure as earlier and lashed at his shot. He looked to have done rather better a few minutes later when his shot beat Hladky but not the post, however Beadling reacted far quicker than the home defence and thumped the ball into the unguarded net to give the visitors a three-goal advantage at the break.

Gary MacKenzie headed over from Andreu's corner early in the second half but it didn't seem to signal a turning of the tide. Instead, the Saints defence still looked disjointed, a mix-up almost letting Dow in but Hladky was out early to take care of the danger. A rare Buddies chance came when Danny Mullen nodded the ball on for Paul McGinn and the fullback's shot from the edge of the box fizzed just wide.

There was finally something for the home fans to cheer just after the hour mark. Erhahon got himself a bit of space on the left and fed a short pass to Cooke, who took a touch before curling his shot round the outstretched arm of the relatively unworked Scully to reduce the deficit. It fell further a few minutes later as Scully once again made a mess of a cross, this time failing to get close to an Andreu corner, and Mullen rattled it home. The Pars keeper appealed for a foul but there was nothing doing and it was game on.

Jack Baird strode forward and sent an ambitious effort wide from distance as Saints tried to claw themselves level. Andreu went closer when he won the ball back after his free-kick was blocked, his shot going narrowly over the bar. The push for an equaliser was always going to leave Saints even a more exposed at the back and when a cross found Coley in acres of space it looked like he'd put things to bed for good, only for Hladky to brilliantly turn his shot behind.

Dunfermline sacrificed their attackers in a bid to steady the ship and it did the job, Saints unable to carve out any real chances despite having plenty of possession in the final third. Five minutes of stoppage time provided a glimmer of hope and there was almost a dramatic finale when Hladky went up for a late corner, the keeper's header going wide seconds before the final whistle was blown.