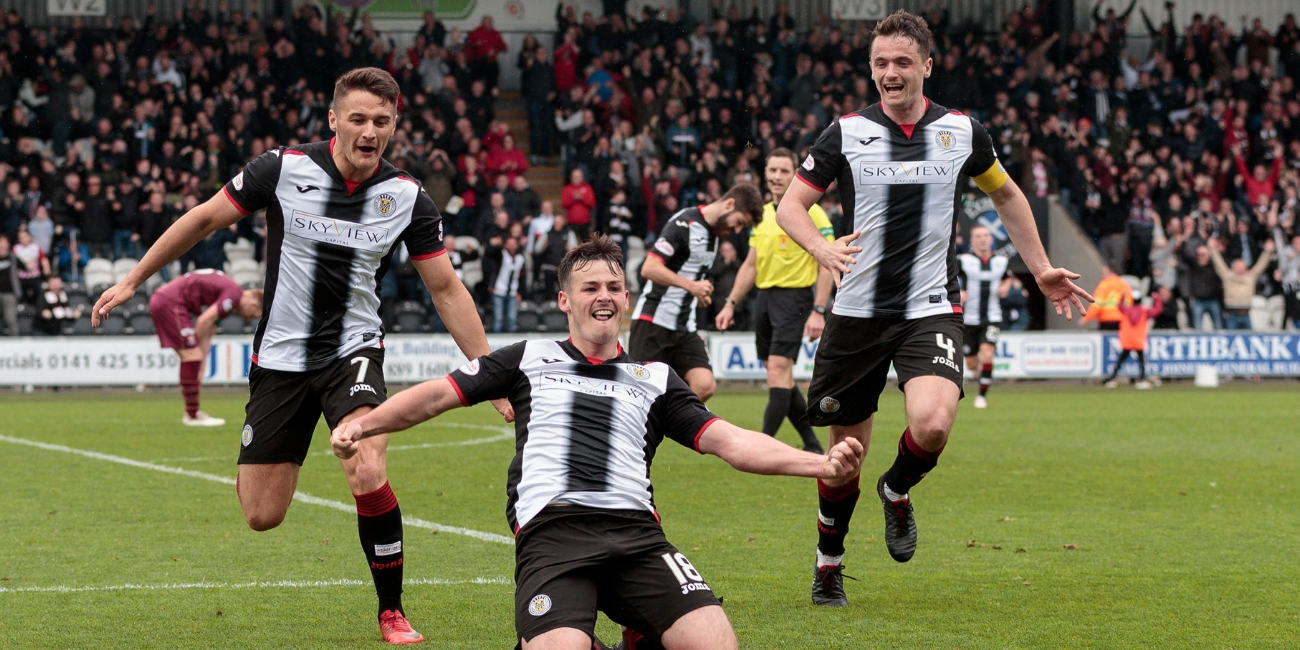 A last gasp wonder strike from Danny Mullen ensured a share of the points in Paisley.

The battle of the Saints was proceeded by one-minute applause in memory of former Scotland great, Billy McNeil, who died aged 79 earlier in the week.

St Johnstone had an early break down the right-hand side after a scrappy first ten minutes. A well worked move from the visitors saw the ball floated into the St Mirren box aimed for Callum Hendry. However, it was hastily dealt with by Vaclav Hladky in the Buddies net.

The men from Perth were causing problems down the right-hand side again a minute later. St Johnstone defender, Richard Foster, had his cross blocked which resulted in the first corner of the game.

The match then entered a pendulum period, switching possession relentlessly with every ball being battled by both teams.

St Mirren could have been ahead on the 20th minute when the ball broke to Mateo Muzek just outside the penalty area, Muzek fought off challenges to swing a left-footed strike goalwards which was rashly punched over the bar by Clark in the St Johnstone net for a corner.  The subsequent ball into the box was cleared by the away side, but the play did signal a turn in what was a very good spell for the Paisley men.

St Johnstone's Murray Davidson received a stern talking to from the referee for his late challenge on Ryan Flynn. From the proceeding free kick at the halfway line, the Buddies threatened the Perth side with a testing ball into the box which eventually lead to a corner kick. The half-hour mark came, with the game finely balanced and highly contested.

A late challenge on Paul McGinn resulted in a booking for St Johnstone’s Murray Davidson. The proceeding free kick out was floated in by Anders Dreyer, but the ball bypassed all players before crashing off the St Johnstone post.

A late flurry of good play from St Mirren before the break saw Danny Mullen's header just over the bar. The game was poised at nil-nil at the halftime break.

St Johnstone began the second half a little sharper than the home side, putting the Buddies under some early pressure. However, the game slowly moulded into a similar pattern as the first half, with barely anything to separate the sides and the best chances falling to the home team.

Stephen McGinn slipped a clever through-ball to Dreyer in the 52nd minute. The Dane took a neat touch before being taken out by St Johnstone's Scott Tanser. The resulting free kick was cleared by the Perth side, who then broke away quickly. A foul on the halfway line by Ryan Flynn halted the move and earned him a yellow card.

St Mirren then endured a tense few minutes as a dangerous looking free kick for St Johnstone on their left hand flank was whipped in by Kennedy. The powerful cross was headed clear back to where it came from before a questionable decision by the referee resulted in another St Johnstone free kick. The ball eventually broke clear to the substitute, McAllister, on the left hand side who was carelessly brought down near the halfway line.

In to the last ten minutes and substitute, Simeon Jackson caused problems in the St Johnstone box. The striker turned a St Johnstone defender and forced a quick reaction from the keeper.

However, the Saints were dealt a blow just ten minutes from time. Against the run of play, a great sweeping cross ball by St Johnstone's Liam Craig landed at Richard Foster, who carried the ball in his stride before winning the bounce of the ball over McAllister. Foster then slotted the ball inside to substitute Chris Kane, who had kept up with play. Kane made no mistake from 8 yards out and placed the ball into the St Mirren bottom left-hand corner.

The final minutes became a dog-fight, with St Mirren anxiously looking for the equaliser which they deserved. McAllister's excellent Cruyff turn and cross into the box was eventually cleared, but St Mirren continued to apply pressure looking for a goal. The final five minutes were all at St Mirren's feet, with loads of possession but struggling to find that killer ball which would lead to a goal.

The home side’s moment eventually arrived with minutes to spare of regular time. Vaclav Hladky picked up the ball near the halfway line, miles from his goal, and fired a hopeful ball towards Simeon Jackson. The ball was met by the head of St Johnstone’s Kerr but the clearance fell enticingly for Mullen whose left foot produced the sweetest of volleys which rocketed into the top right-hand corner of the net. Not only a vital equaliser but also a contender for goal of the season.

The full-time whistle went shortly after, ensuring a hard-fought draw was confirmed. The result moves the Buddies seven points clear of bottom side Dundee and keeps us just two points behind Hamilton.