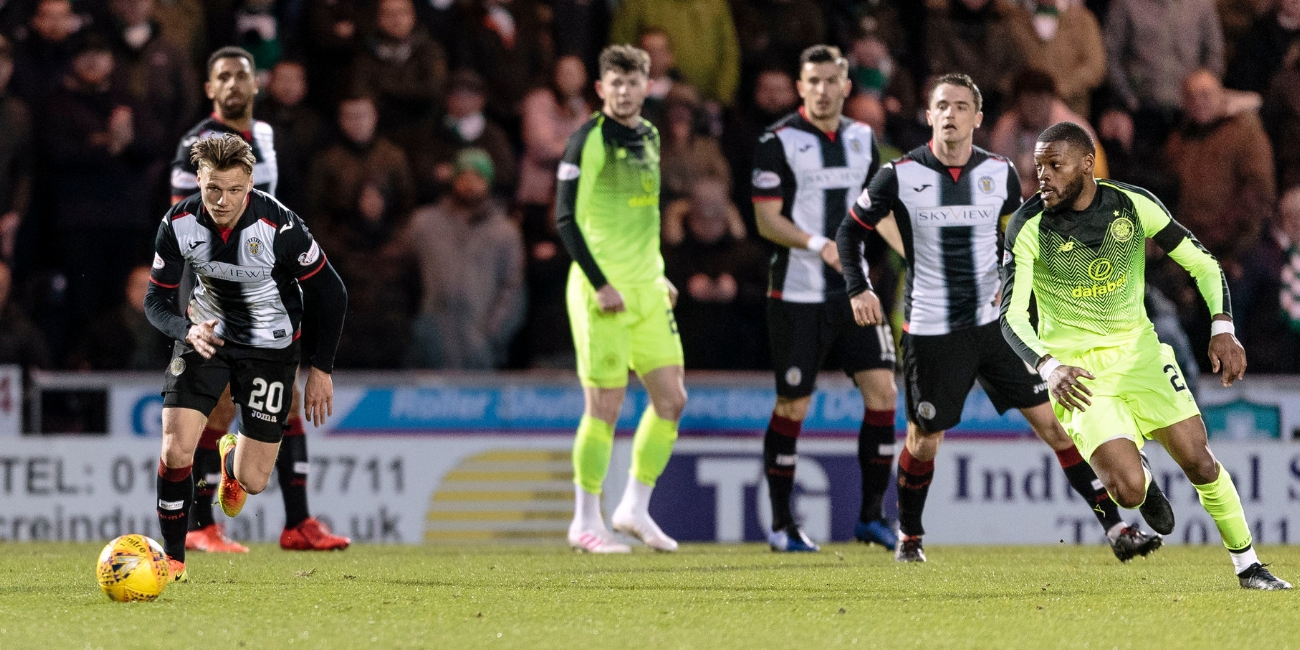 Goals either side of half-time from Timothy Weah and Ryan Christie were enough to give the visitors all the points.

Pre-match Saints gaffer Kearney told BBC how it was important to start the game well, but it was the hosts who started the brighter. They should have been ahead on 10 minutes when a Callum McGregor through ball found Kristoffer Ajer of all people. It was perhaps nosebleed territory for the Norwegian centre-half who sent his effort over.

The Hoops took the lead just four minutes later. Mikael Lustig's shot spun up for Timothy Weah who headed off the cross bar. It was hard to tell whether it had crossed the line with Kearney questioning fourth official David Lowe, but the goal was given and Celtic led.

Neil Lennon's side had a glorious opportunity to double that lead five minutes later when Oliver Burke was found in space inside the Saints box, but the forward somehow smashed wide from close range.

The visitors were on top and looked like they would double their advantage when Jim Kellermann was penalised for a handball after Emilio Izaguirre's cross into the box. Olivier Ntcham stepped up but his effort was blocked by Saints goalkeeper Vaclav Hladky before the rebound crashed off the bar and over.

Hladky, who was named as Saints' man of the match, had to be alert at the start of the second half after Oliver Burke had jinked by the Buddies defence to make his way into the box but the Czech goalkeeper made a good stop.

There were warning signs for Saints but the Buddies were still only 1-0 down and started to grow into the game almost finding ourselves level when Cody Cooke found space on the edge of the Celtic box and curled low towards the right corner. Scott Bain made a terrific save to turn the ball behind for a corner.

Laurentiu Corbu, on his first St Mirren start, sent the ball in where Cooke headed on to the back post but Duckens Nazon couldn't force home.

Nazon really should have gotten Saints level when he found himself one-on-one with the Celtic goalkeeper just before the hour mark. Kellermann had been fouled by Scott Brown in the middle of the park and the Buddies were awarded a free kick. Mihai Popescu caught out the Celtic defence as he took it quick and found Nazon clear on goal. But as the Haitian striker broke into the box, he checked back and the ball was smothered by Bain who had rushed off his line.

Ryan Christie came on as a substitute for the visitors and twice went close to extending their lead. The first saw him denied by Hladky on 66 minutes before fizzing a shot from the edge of the box just over the bar eight minutes later.

It was Christie who sealed the points though with just five minutes to go. It was neat bit of play between the forward and McGregor before his effort deflected off Popescu from just inside the box found its way past Hladky.

Saints had a final chance to pull a goal back but substitute Paul McGinn's shot was cleared off the line.

Up next for the Buddies is Hamilton on Saturday at the Hope CBD Stadium.