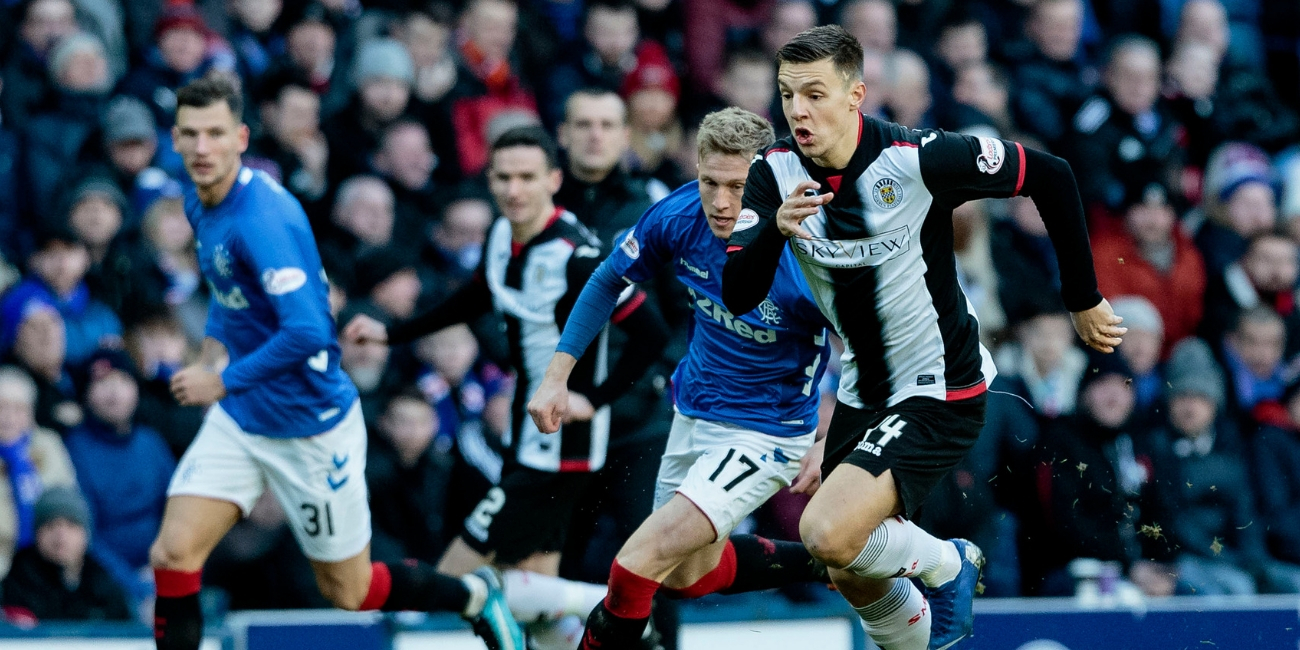 St Mirren were beaten 4-0 by Rangers at Ibrox this afternoon.

The Light Blues were awarded FOUR penalties over the 90 minutes by referee Andrew Dallas - three of which left the Buddies frustrated.

Saints couldn't have wished for a worse start when referee Andrew Dallas pointed to the penalty spot after Ethan Erhahon felled Jermain Defoe inside the box with just two minutes on the clock. There were no arguments from St Mirren about the award and James Tavernier stroked home to give the home side an early lead.

To the Buddies' credit they responded well to the early setback and were having plenty of the ball. Brad Lyons almost put Anders Dreyer one-on-one with Allan McGregor, only for a well-timed Tavernier tackle denying the Dane.

While Saints were on top when it came to possession, Rangers were threatening on the counter and almost doubled their lead on 12 minutes when a quick break forced Vaclav Hladky to turn behind a Ryan Kent effort from the edge of the area.

St Mirren had a couple of corners but couldn't capitalise from them with the nearest chance coming when Dreyer clipped a ball into the box to meet Simeon Jackson. But the forward headed over.

On 25 minutes Rangers were awarded a second penalty when Defoe went down inside the box with Paul McGinn in close proximity. Saints were incensed by the decision with Jack Baird booked for his remonstrations. Again it was Tavernier who stepped up, but this time the right-back smacked his effort off the post.

It would have felt like justice for the Buddies who continued to be well in the match heading towards half-time. However, all Oran Kearney's side had to show for it was a long range shot from Dreyer which drifted wide.

With 10 minutes to go until the break, Kent almost made it 2-0 when he curled the ball off the top of the cross bar from 18 yards.

It was a slow start to the second half, but Saints had the first half chance when good work from Erhahon saw the 17 year-old get the ball into the box to meet the foot of Jackson who fired over.

Nine minutes into the second half Rangers were awarded their third penalty of the afternoon. Like the second, it looked to be another harsh decision as the ball appeared to strike Tansey's hands outside the box. This time Tavernier made no mistake from 12 yards to double Gers' advantage.

Remarkably, with 11 minutes of the game remaining, Andrew Dallas pointed to the spot for a FOURTH time. And, as with the previous two, the St Mirren players were left feeling aggrieved with suggestions the foul on Candieas took place outside the box. Despite the protests, Defoe stepped up to score his first goal at Ibrox and make it 3-0 to the home side.

With the game gone from St Mirren, Rangers added a fourth two minutes later when Ryan Kent finished beyond Hladky from inside the box.