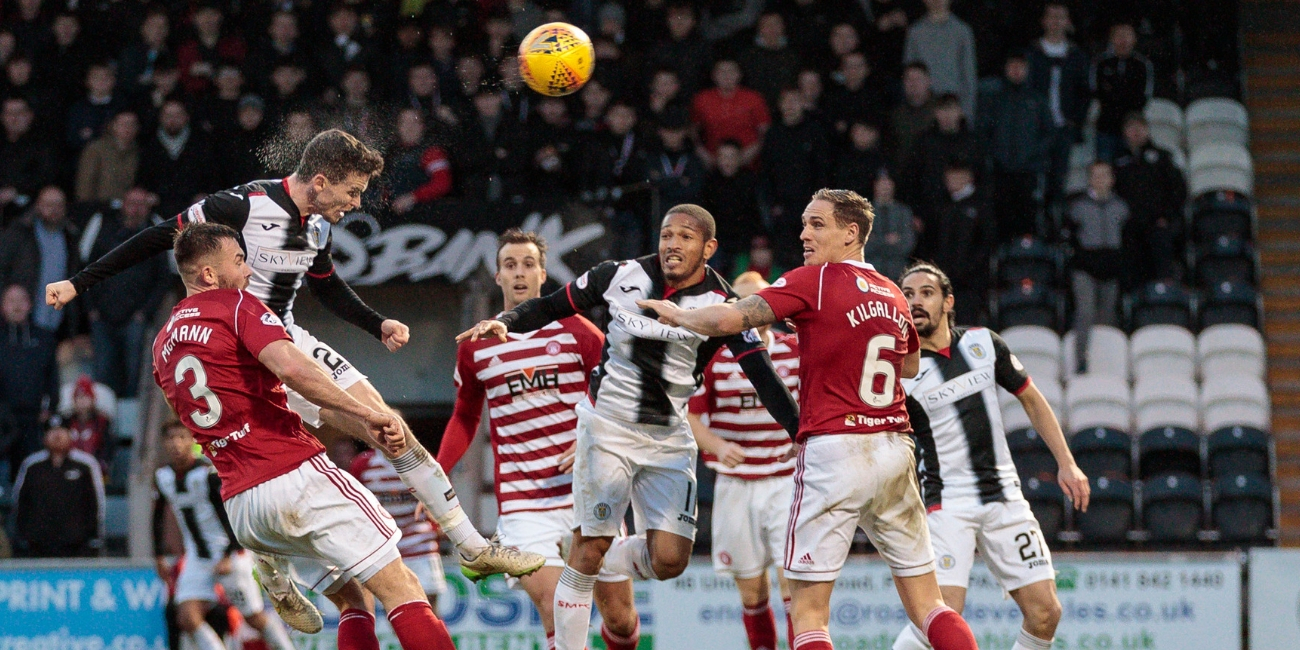 Saints hopes of moving out of the bottom two this afternoon were ruined by a James Keatings-inspired Hamilton Accies.

The forward claimed two assists in the first half, former Buddie Dougie Imrie heading in a corner before Ziggy Gordon poked home a free-kick. A goal from Saints skipper Stephen McGinn just before the break raised the mood and the positivity continued into the second half only for Keatings to score a tremendous goal on the break. Any hope of a comeback was wiped out soon after when Simeon Jackson was shown a second yellow for his challenge on Gordon.

Saints had gone into the game looking for their second win in a week, manager Oran Kearney sticking with the side that had played so well against Hearts the previous Saturday. And they started brightly too, Jackson releasing Kyle Magennis who shot over from the edge of the box. Keatings then curled a free-kick over before Paul McGinn's effort from Adam Hammill's free-kick was deflected narrowly wide.

It was a set-piece at the other end that provided the opener. Keatings picked out Imrie from a corner and his glancing header looped over everyone – including Ethan Erhahon on the back post – before dropping into the net. It was a huge blow as Accies had barely threatened, however having gone in front they sensed blood and went hunting for a quick second, Keatings and Miller both shooting wide from decent positions.

Saints had shown little since going behind and the manager decided to make a change after little more than half an hour as Ryan Edwards replaced Ian McShane. It seemed to provide some fresh impetus as Paul McGinn headed wide from a great Erhahon cross before Accies went back on the offensive as Imrie saw his close range shot blocked by Danny Rogers' legs.

That set up a dramatic end to the half. First, the visitors doubled their lead when a soft free-kick allowed Keatings to curl the ball into the box and Gordon ghosted in to prod it past Rogers, the Saints players appealing in vein for the offside flag. In response, a frustrated Hammill saw his shot deflected wide before the Buddies got one back. A corner was cleared as far as Erhahon and he played it back into the mix where Stephen McGinn turned it home.

There was a lively start to the second half, a Hammill free-kick causing chaos in the Accies box as Jack Baird nodded it on but Jackson couldn't stab it home. Gordon was then lucky to escape with just a booking as he hauled down the striker as when was about to go through on goal. Hammill's free-kick was blocked by the wall, the ball eventually dropping to Magennis who volleyed wide.

Just as a Saints equaliser looked inevitable, Hamilton hit on the counter. Aaron McGowan was given far too much room on the right and when he found Keatings, the forward had all the time and space he needed to compose himself before curling a tremendous shot past Rogers.

Some neat passing saw Lee Hodson send a shot just wide as the deflated Buddies tried to respond, Hammill being replaced by Cody Cooke. Injury then ended Keatings' tremendous display prematurely, Steven Boyd replacing him at the same time as Danny Mullen came on for Paul McGinn. It took the tally of Saints strikers on the field up to three but that situation didn't last long, Jackson picking up a second booking for a foul on Gordon. There was no debate over that caution but his first yellow card for a challenge on the same player at the start of the second half had been somewhat harsh.

Cooke teed Mullen up for a chance that he volleyed wide before the former had a great chance to set up an exciting final 15 minutes, unable to turn the ball home after it had been fired across goal by Stephen McGinn. Mullen went even closer when he thundered a volley off the corner of the goal after great play by Magennis to tee him up, which proved to be as close as Saints would get to finding a way back into the game.