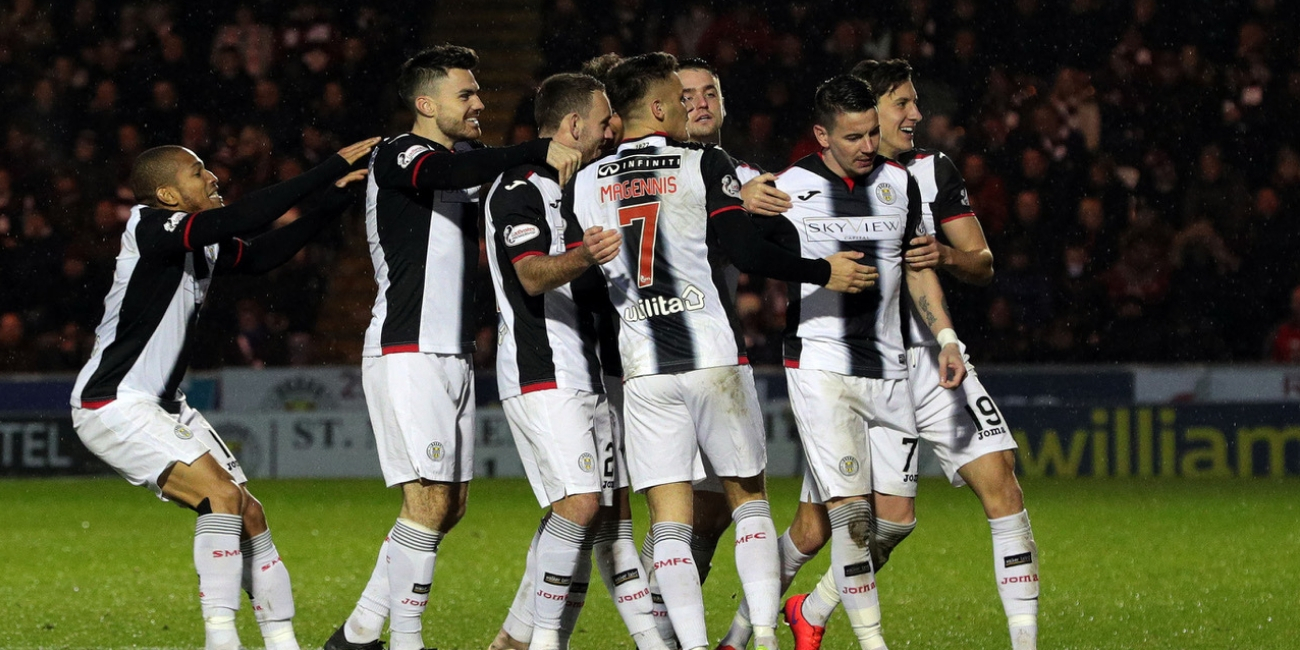 Saints ended the long wait for a victory this afternoon with a fine display against Hearts in Paisley.

Adam Hammill was the hero as he bagged both goals early in the second half, the first probably finishing the country's goal of the season competitions before we've even reached the end of November as the winger found the net from 45 yards.

In doing so, it gave Oran Kearney his first win as Buddies boss.

Danny Rogers had little to do on his first league start for the club following the departure of Craig Samson. Skipper Stephen McGinn returned in place of Ryan Edwards, who was unable to play against his parent club, with Jack Baird replacing the injured Anton Ferdinand at the back. Hearts made one change to the team that lost to Kilmarnock a fortnight ago with Sean Clare starting in place of Olly Lee.

Kyle Magennis headed Hammill's early free-kick straight at Zdenek Zlamal before Hearts should have taken the lead, the unmarked Steven MacLean somehow shooting wide after Craig Wighton had helped Michael Smith's cross on to the former St Johnstone man. Anyone hoping that was a sign of things to come would be sadly mistaken with chances few and far between for both teams. Hammill did show some attacking intent at times for the Buddies, slipping the ball through for Paul McGinn only for Jimmy Dunne to get back and clear the danger.

A few crosses into the Saints box caused some momentary scares for the Buddies before they went desperately close to taking the lead, Kyle Magennis beating Clevid Dikamona to a loose ball only to see his tremendous shot hit the bar. After being booked for a foul on Michael Smith, the young midfielder was then in the right place at the other end as he nodded away Dunne's goal-bound header. Just before the break Stephen McGinn had a great chance to put Saints in front as he took advantage of Dunne's dithering but Zlamal was equal to the shot.

If the first half had been short on thrills, the second was anything but as Saints took the lead in spectacular style. As the Buddies tried to play the ball forward, it sat up nicely for Hammill and he let rip from 45 yards, the ball sailing over the head of Zlamal for a spectacular opening goal that nearly lifted the roof off the Simple Digital Arena.

But the winger wasn't done there. After resisting some Hearts pressure, Saints went back on the attack, Magennis heading the ball over Smith before crossing for Paul McGinn. The ball bounced off the fullback but fell perfectly for Hammill, who curled it beyond the reach of Zlamal into the bottom corner.

Hearts thought they'd reduced the deficit when Peter Haring sent a thumping header from sub Olly Lee's free-kick past Rogers, however the flag was up for offside. The same combination threatened again from a corner but this time Haring could only head over before Hammill went close to his hat-trick, getting the better of the Hearts defence only to lob tamely into the arms of Zlamal.

Although Hearts continued to push they created little of note and Saints could have wrapped things up late on when Paul McGinn looped a shot towards goal only for Zlamal to tip it over at the last moment. It would have made the final 10 minutes or so a little easier but there was no need to worry as Kearney's men saw things out for a much-needed win.