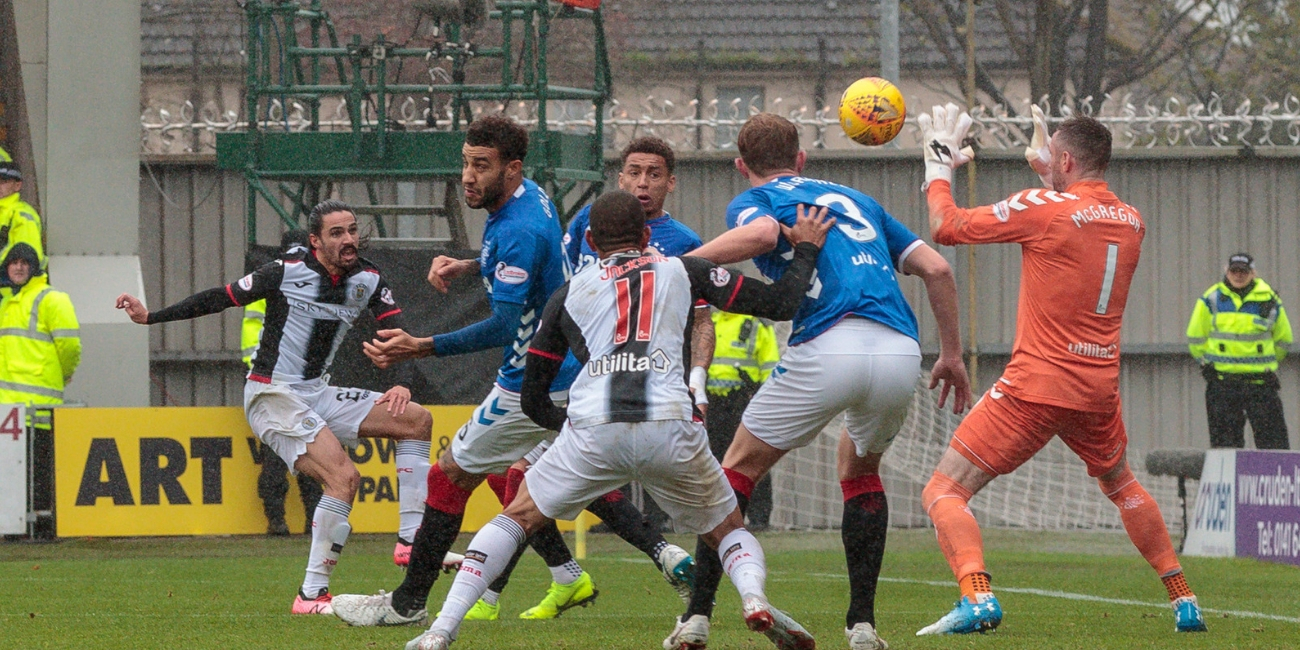 Saints were unlucky to fall to defeat they went down 2-0 to Rangers at the Simple Digital Arena.

The Buddies had the better of the first half, Ian McShane and Ryan Edwards bringing the best out of Allan McGregor before Paul McGinn passed up a good opportunity in stoppage time.

Rangers stepped things up after the break but it looked as if it would be a frustrating afternoon for Steven Gerrard's side before Daniel Candeias scorched in a screamer with 10 minutes left.

To rub salt into the wounds, Alfredo Morelos added a second in injury time before Candeias was sent off in the aftermath.

Oran Kearney can at least be happy with the performance, if not the result, produced by his much changed side. McShane and Ethan Erhahon were handed their first starts of the season with Danny Mullen and Matty Willock restored to the team. Rangers gave a debut to Eros Grezda with McGregor back in goals.

McShane nearly marked his return to the team in style, his early free-kick clipping the top of the wall only to be turned behind by McGregor. Rangers countered from the corner that followed but Anton Ferdinand was in the right place to block Ovie Ejaria's shot. Saints skipper Stephen McGinn then tried to add to his collection of spectacular goals against the visitors, the ball breaking to him just inside their half and, with McGregor out of position, he thumped it towards goal only to see it go wide.

The Buddies were causing the visitors some problems in the final third, Edwards outmuscling the defence to get on the end of McShane's cross but his shot was parried by McGregor before it fell onto the roof of his net. Connor Goldson had a header from a Rangers corner blocked before his side had a penalty appeal turned down for a challenge on Ejaria.

As Saints tried to break, play was stopped for Goldson's challenge on Simeon Jackson but the message didn't seem to reach Jack as he then clattered into Mullen, the midfielder being booked for his troubles. Scott Arfield followed him into Willie Collum's book a few minutes later for a challenge on Stephen McGinn, Erhahon soon joining him for a foul on Ryan Kent.

The Liverpool loanee nearly gave his side the lead just before the break, firing the ball across goal and beyond Craig Samson but also the far post, his shot just beyond the reach of the onrushing Morelos. Saints went even closer in the final seconds of stoppage time, Edwards playing a corner back into the mix and when McGregor spilled it Paul McGinn pounced but the fullback poked it into the side netting.

Perhaps there was something wrong with the goalmouth as Samson had the same problem early in the second half, spilling a shot from Ejaria before Erhahon blocked Grezda's attempt from the follow-up. Rangers were beginning to click through the gears, a fine passing move ending with Grezda hitting the post when it looked like he'd mark his debut with a goal. It was to prove his last involvement as he was immediately replaced by Candeias.

Willock looked to have sent Jackson through on goal only for the offside flag to go up, although McGregor blocked the striker's shot with his legs anyway. There was then a huge let-off for Saints as Rangers tried on numerous attempts to force the ball home, Samson and his defenders flinging themselves in front of everything. They seemed to have escaped only for the ball to be cleared as far as Jack at the edge of the box, however he shot wide.

The Gers were fortunate to get a free-kick in a dangerous position after McShane was harshly booked for a challenge on Ejaria but thankfully James Tavernier curled it a few yards over the bar.

The visiting fans were getting increasingly frustrated with their side's decision making in the final third, something which heightened when Tavernier bizarrely lobbed the ball over the goal when he had far better options open.

However, with 10 minutes left all that was forgiven as Rangers took the lead with the sort of goal their manager would have been proud of. Candeias picked up the ball just outside the box and took one touch to steady himself before sending a scorcher into the top corner. There was nothing Samson could do – even if there were suggestions the winger was trying a cross rather than a shot. He was perhaps a bit too pleased with himself as he was booked for his celebrations – something which would soon prove costly.

Edwards headed wide from Jackson's cross as Saints looked to grab a deserved point but instead they fell further behind in stoppage time. The ball was slipped through to Morelos and, with the flag staying down, the striker made no mistake in rattling it into the far corner.

In the aftermath, Ferdinand was booked after an altercation with Candeias, whose all-action cameo display was brought to a premature halt when he was shown a second yellow card