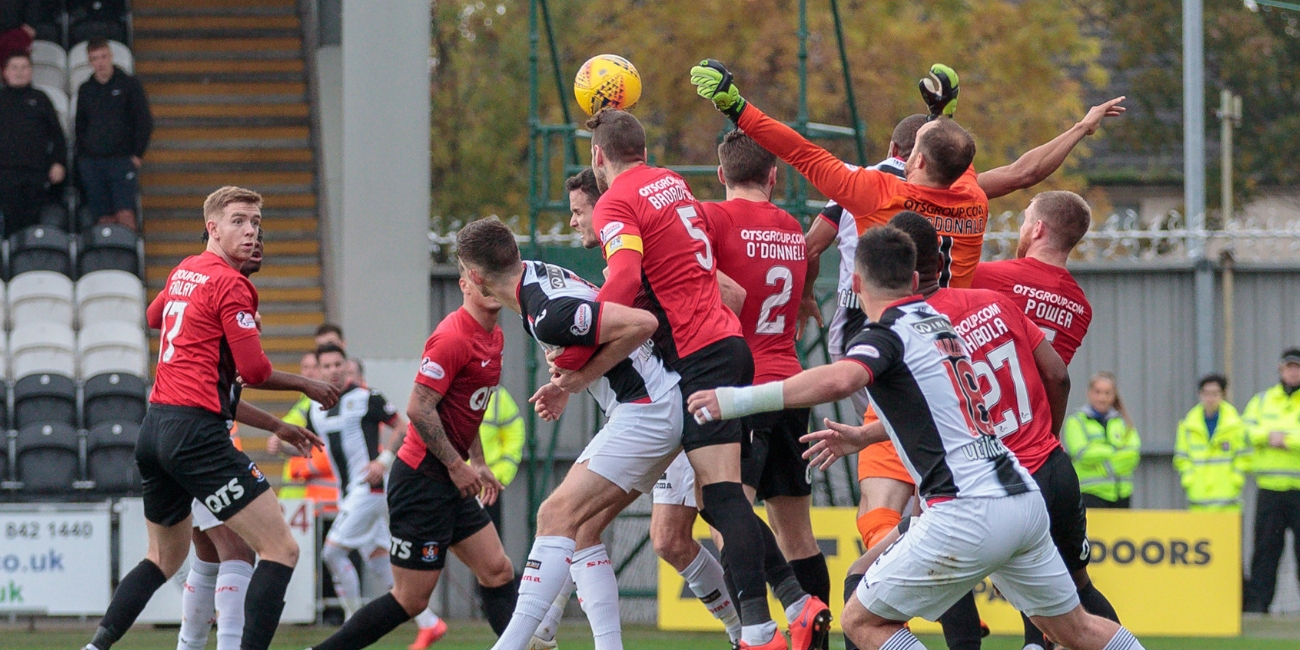 Saints' disappointing run of form continued with a controversial defeat to Kilmarnock in Paisley.

At half-time the Buddies looked on course for their first win since the opening day of the season, Adam Hammill's free-kick missing everyone – apart from maybe Danny Mullen – as it flew into the net.

However, Killie drew level just after the break with a fantastic goal from Alan Power before they scored a debatable winner, the officials ruling Aaron Tshibola's header had crossed the line before being saved by Craig Samson.

Conslusive proof that things really go against you when you're struggling came moments later when Simeon Jackson thought he'd levelled things up – only for the offside flag to cut short his celebrations and any hope of a point.

Hammill's inclusion from the start was a surprise considering he went off injured on his debut against Aberdeen a fortnight ago. Danny Mullen was also back after injury and Matty Willock returned to midfield with Cammy MacPherson and Ryan Edwards the pair dropping out.

Former Buddie Kirk Broadfoot headed an earlier corner wide for the visitors before Saints threatened for the first time, Paul McGinn's attempt to head Ryan Flynn's cross to Mullen being deflected behind for a corner. Hammill's delivery was cleared back to him but as he tried to control the ball he was bundled to the ground. The winger took the resultant free-kick himself and curled it into the box, Mullen throwing his head at the ball as it bounced into the net. The striker seemed to suggest he'd got something on it, however Hammill claimed the goal – not a bad way to introduce himself to the Paisley punters.

Broadfoot headed a free-kick straight at Craig Samson as the visitors tried to respond before the defender gave away a free-kick in a dangerous possession when he clipped Jackson as the striker tried to spin. Hammill was unable to repeat his earlier magic, this time the ball clipping the top of the wall. Play was then stopped so a Killie player could receive treatment, the Saints fans and some players annoyed it resumed with Mr Collum giving Jamie MacDonald the ball. The visitors quickly attacked and Eamonn Brophy should have done better than curl a shot wide before Samson was booked for continuing to protest about how play had restarted.

It was an entertaining game without too much in the way of chances, Tshibola meeting a Killie corner at the back post but he could only head wide. The Saints defence had dealt well with what came its way in the opening 45 minutes but there was a blow when Anton Ferdinand failed to re-appear for the second half, MacPherson taking his place.

The visitors looked a different team after the break, Greg Stewart lashing an early sighter over the bar. Power was next to have a go after being teed up by Chris Burke but his daisy-cutter was easily dealt with by Samson. The keeper was in action again soon after, doing well to turn Stuart Findlay's drive round the post. However, it was merely a brief delay as the following corner was worked to Power at the edge of the D and he crashed an unstoppable shot into the top corner to deservedly bring the visitors level.

Saints had barely got going in the second half but nearly re-took the lead from another Hammill free-kick. This time the winger found Jackson and his close range shot was blocked by MacDonald before hitting the striker and bouncing behind. It was another set-piece that was to prove Saints' undoing as Killie scored from another short corner that was crossed to the back post for Tshibola to head towards goal. It looked as if Samson had kept it out but linesman Douglas Ross and ref Willie Collum decided it had crossed the line before he'd managed to save it, much to the fury of the home players and support.

Initially, they channelled their anger into trying to find an equaliser and thought they'd grabbed it moments later. Hammill's chipped free-kick found Stephen McGinn and his shot was parried by MacDonald before Jackson netted the rebound – only for the joy to be cut short by linesman David Roome's flag going up for offside. It was as close as the Buddies were to get to an equaliser, Killie sub Rory McKenzie heading a late effort wide as the Ayrshire side tried to seal victory.