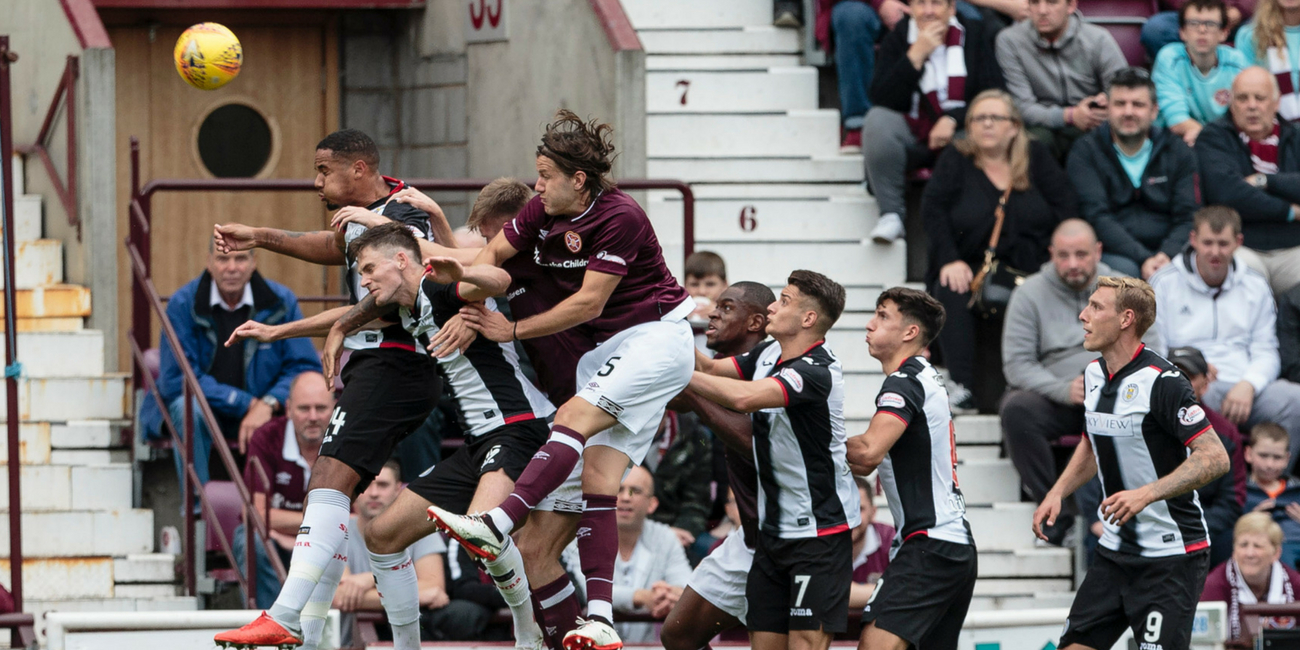 St Mirren were defeated 4-1 at Tynecastle this afternoon as Steven Naismith scored a first half hat-trick for Hearts.

The veteran forward opening the scoring from the penalty spot with just four minutes on the clock. Referee Kevin Glancy had deemed that Uche Ikpeazu had been fouled in the box and Naismith made no mistake from 12 yards despite Craig Samson diving the right way.

But Saints had a great chance to get level only a minute later when the ball was slid through to Stephen McGinn. The captain had time and space inside the Hearts box but dragged his attempt by the far post.

Jimmy Dunne and Ben Garuccio had chances to double the Jambos' advantage, with Dunne nodding wide from a corner and Garuccio sending a fierce drive from the edge of the box just over.

On 17 minutes, Hayden Coulson had an opportunity similar to Stephen McGinn's early attempt but like the skipper he sent the ball wide.

Saints would find themselves level two minutes later though after some nice work from Cammy Smith. The forward was back in the side after having been benched against Livingston a week previous. He did well on the left to break into the box and get to the byline before sending the ball across the six yard box where it deflected off Dunne beyond Zdenek Zlamal.

The Buddies had arguably deserved to be level at that point but the home side were still threatening with Alfie Jones having to make a good block to deny Steven MacLean on 25 minutes.

Hearts re-took the lead on the half hour mark after slack defending from the Saints defence. Ikpeazu's ball into the box was cushioned down into the path of Olly Lee by Naismith. The English midfielder didn't need a second invitation to slam the ball beyond Samson to make it 2-1.

And that second goal seemed to buoy Hearts who would go on to score two goals in the space of three minutes to effectively end the match as a contest before half time.

That, however, was not before the returning Demetri Mitchell, who re-signed for the Jambos on loan from Manchester United earlier this week, almost made it a second debut to remember with an ambitious overhead kick that cracked off the bar.

That was the warning sign for Saints who would concede 60 seconds later with Naismith grabbing his second of the game. The Buddies couldn't get their lines clear at a corner kick with the ball worked to the near post where Naismith managed to squeeze the ball over the line with a header.

Naismith would complete his hat-trick just before half-time after being found with acres of space and an abundance of time in the box to steady himself before rolling an effort beyond Samson and into the back of the net via the post.

The game was over at half-time, but both sides had opportunities after the interval.

Mitchell drove an effort over the bar after a succession of corners 10 minutes into the second period.

Saints had two big chances in the space of six minutes with Lee Hodson smashing the ball into the side netting after getting into the box, before Matty Willock really should have reduced the deficit when he found himself one-on-one with Zlamal but he elected the chip the keeper rather than try to beat him with power which allowed John Souttar to get over to clear off the line.

Alfie Jones spurned a glorious chance with just 10 minutes to go after Nicolai Brock-Madsen headed the ball down to the defender inside the six yard box, but he couldn't connect properly allowing Zlamal to smother.