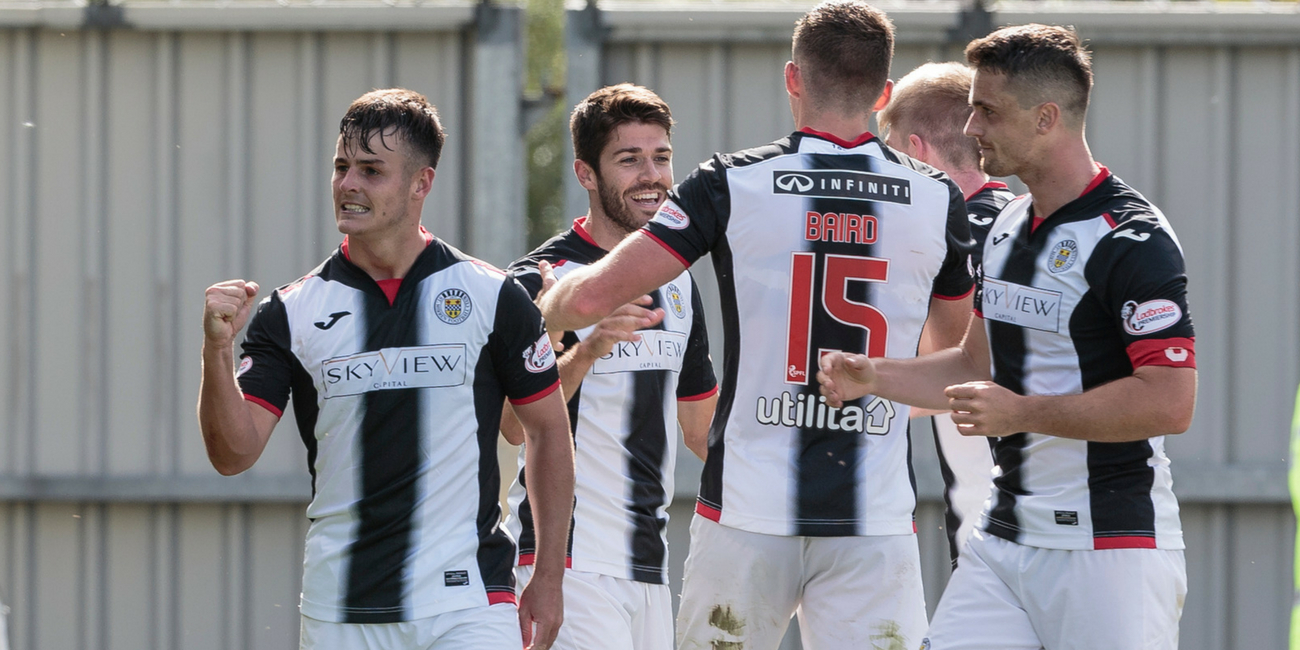 St Mirren secured all three points on our return to the Premiership thanks to a Danny Mullen brace.

The striker scored in both halves to give Saints a winning start to the 2018/19 campaign.

It was a frantic match that could have gone either way, but in the end all three points remained in Paisley in Alan Stubbs' first league match as Buddies gaffer.

Saints got off to a quick start with Cole Kpekawa heading over from a corner kick with just two minutes on the clock.

Two minutes later the Buddies were awarded a free kick in a promising position on the right hand side when Paul McGinn was bundled to the ground. Kyle Magennis sent a tempting ball across but there were no takers in black and white.

The opening exchanges were back and forth, evidenced by two quick chances for the visitors soon after. Jean Mendy found himself in plenty of space inside the Saints box but headed straight at Craig Samson. Then, just a minute later, ex-Saint Paul McGowan set Sofien Moussa free, though the striker dragged the effort by the post.

It was The Buddies who would draw first blood with Danny Mullen netting St Mirren's first Premiership goal of the season. Good persistence from Cammy Smith saw the forward manage to force the ball out wide to Paul McGinn. The right back's first time cross was pinpoint finding the head of Mullen who flicked beyond Dundee goalkeeper Jack Hamilton to send the Paisley crowd wild.

The joy would be short-lived though with the visitors finding themselves level three minutes later. Saints failed to clear their lines and the ball fell to Elton Ngwatala around 25 yards from goal. The French midfielder struck it with an incredible amount of venom to find the bottom right corner to make it 1-1.

Saints had two good chances in the space of a minute around the 25 minute mark. Matty Willock may well feel he could have done better with a header from close range going over the bar, before Smith saw a fizzing effort fly just by the right post.

Paul McGinn almost caught out Hamilton at his near post on 35 minutes with a powerful strike that the goalkeeper had to push wide.

Both sides would go close as the game eked towards the interval. Dundee captain Josh Meekings was on the end of a Mandianga ball but sent a looping header just over with Craig Samson at full stretch. It was Saints turn just before the break with the ball falling to Smith on the edge of the area. The forward turned and lashed an effort which Hamilton parried past the post.

Dundee started the second half brightly and would have been disappointed they didn't do better with an opportunity on 48 minutes. Jesse Curran sent the ball across the box where it looked prime for Mendy to smash towards goal, but the striker fluffed his lines as he failed to get an effort away.

The Dark Blues were given a glorious opportunity to take the lead just a few minutes before the hour mark. A miscommunication between Kpekawa and Samson saw Mendy racing through one-on-one with the Saints keeper. Samson attempted to claw the ball away as the striker attempted to round him but clipped the leg of the Frenchman. Referee Alan Muir didn't hesitate with his decision, awarding Dundee a penalty and giving Samson a yellow card. Moussa stepped up but Samson, as he has done so often in St Mirren jersey, pushed away the spot kick to keep the scores level.

The goalkeeper was forced into action again on 62 minutes when an attempted Willock clearance ricocheted into the path of Mendy. Samson did well to block with his feet from close range and Saints got the ball clear.

With just over seven minutes remaining, Mullen was in the right place at the right time to grab the winner for Saints. It was a moment that opposition goalkeeper Hamilton will want to forget. Good pressing from substitute Ryan Flynn saw the goalie slip on the ball, allowing Flynn to race towards the empty net. From a tight angle he sent the ball across the six yard box for Mullen to slam home.