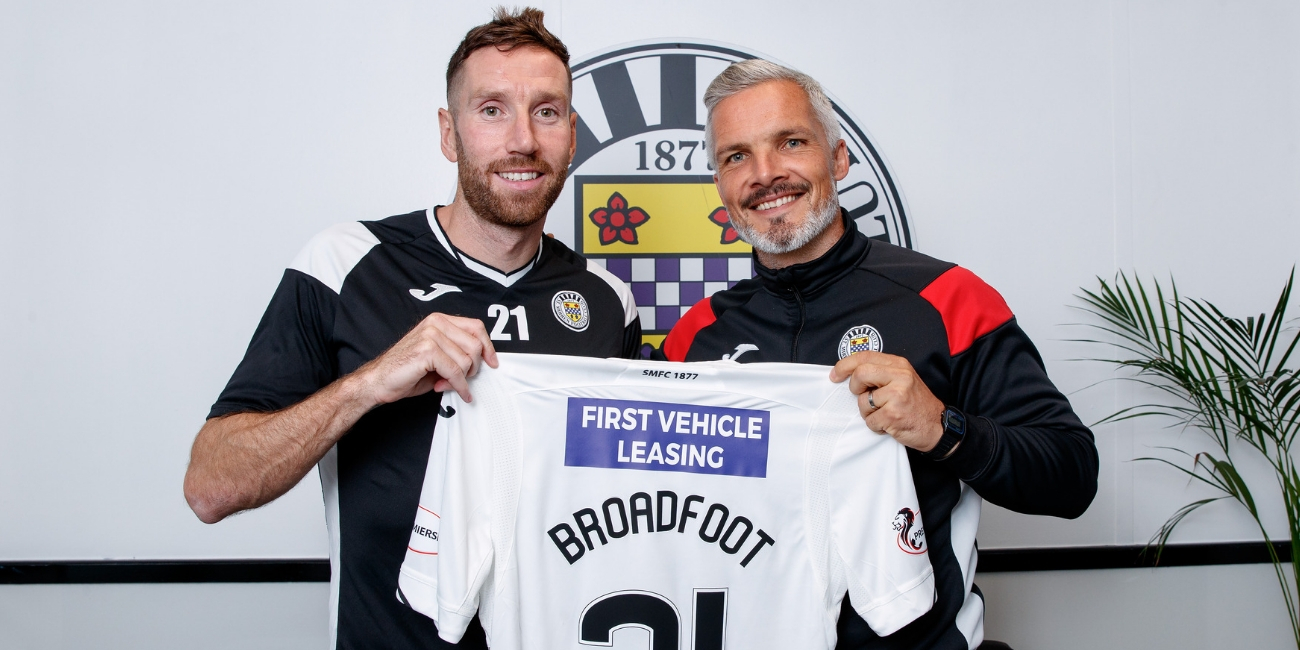 Jim Goodwin hailed the experience new signing Kirk Broadfoot will bring to Saints after the 35 year-old defender put pen-to-paper on a two-year deal earlier this week.

Kirk returned to the Buddies, where he spent five years with at the beginning of his career, after mutually terminating his contract at fellow Ladbrokes Premiership club Kilmarnock.

The manager admitted he was surprised that a player of Kirk's ability had become available and with Morton taking Jack Baird on loan until January everything came together.

And after speaking to people who have worked with Kirk in the past, Jim is delighted to have him in at the club.

Speaking to stmirren.com, the manager said: "We’re really really pleased to have him.

He ticks all the boxes for us with regards to being another good, experienced professional, the right type of character we need and he’s a leader.

"That’s something I have been very mindful of during the full recruitment process. Trying to get that mix of good experience with good youth and I feel we have done that very well throughout the window.

"Kirk became available out of the blue and we had the opportunity to send Jack Baird out on loan and it all just kind of fell into place.

"We’re really pleased to have him in. He’ll add some invaluable experience to the group. It adds competition for places too. Gary MacKenzie and Sean McLoughlin have been outstanding in the opening four league games but Kirk is there now to apply a wee bit of pressure on the boys and make sure that they are kept on their toes.

"I’m pretty sure that every other team out there in a similar situation to ourselves would have been desperate to add him to the squad.

"He’s got a close affinity with this club and he expressed an interest in coming back here as soon as he became a free agent. He kind of emphasised the importance of finishing his career here.

"I don’t know Kirk personally but I made a few phone calls regarding him and anyone who has worked with him in the past have all had glowing references and obviously Gus MacPherson has worked with him previously as well and said nothing but good things about him.

"As I say I’m really really pleased to have him in. I think he’ll add a bit more professionalism, if you like, to an already very professional group and you can’t have enough leaders or strong characters in the dressing room and that’s what he is going to bring."

Kirk's signing brought to an end a transfer window that saw 11 new faces arrive at the Simple Digital Arena and the manager praised the club for giving him the back to bring in the quality he felt was required to upgrade the squad.

I really am delighted," he said of the business done during the summer.

"I knew when I came in that there was a lot of work to be done and I have to give great credit to the board of directors, the chairman, Tony Fitzpatrick and Gus MacPherson for their help behind the scenes. I made a very strong list, one that I felt that was definitely going to improve us.

"I needed the board to back me and they certainly done that. We didn’t miss out on too many targets that we went for and I’m delighted to say that the players that we have brought in are desperate to be here as well.

"A couple of the English boys have come in and had a look around the facilities and the stadium and were blown away with what we’ve got to offer. I think sometimes we maybe undersell ourselves and we forget what a good club we are and how many good things we have to showcase.

"I’m delighted to have the players in that we’ve got in. We’ve brought in some really good, experiences professionals who will be good role models for the younger ones as well.

"The likes of Tony Andreu, Kirk Broadfoot, Gary MacKenzie, who has obviously already been here, and Stephen McGinn within the ranks as well so we have some great leaders within the group but we’ve also got some young, hungry guys who are desperate to kick on and improve and that’s what we need."

The St Mirren Academy graduate will be with the Greenock side until January after signing on a temporary deal on deadline day.

The gaffer praised Jack's attitude and his desire to play week-in and week-out and says the club will be watching his progress.

Jack has been frustrated at the lack of regular first team football, but his attitude has been spot on in training.

"He accepted the decision and got on with it but I think when David Hopkin phoned us last week to see if Jack was available then I think it was a no-brainer for him to make sure he was playing regularly.

"He’s a very good player and I’ve no doubt he’ll be one of the best centre-halves in the Championship during his time at Morton.

"David Hopkin is a good manager. I had many a battle against him when he was Livingston manager and I think he will bring the best out of Jack.

"We’ll keep an eye on Bairdy, no doubt. It’s a deal up until January and we’ll assess the situation again then regarding what we want to do with Bairdy.

"I have to give him credit. It’s very easy for boys to sit here and not be involved and just hang about in their comfort zone but Jack wasn’t willing to do that. He wanted to get out and play games and I take my hat off to him for that."

The manager also gave an update on captain Stephen McGinn who has missed the opening four league matches.

He confessed that the skipper will be have to be wait for his chance after the form of the team, but remains an integral part of the squad.

Stephen had a bit of a stop and start pre-season.

"He’s had a hamstring problem and came back a little too soon from that one after the East Kilbride game. It’s one we just need to be wary of.

"As that has happened Sam Foley and Ryan Flynn have struck up a half-decent partnership. It’s one of those things.

"I’ve been there myself as club captain and it’s a difficult one, but Stephen is still a big part of what we are trying to do here.

"He is a top pro, he’s been great around the place and he’s just one that’s going to have to be patient and wait for his opportunity.

"I think that shows the strength we’ve got in the squad now that a player of Stephen’s quality doesn’t just walk right into the team."