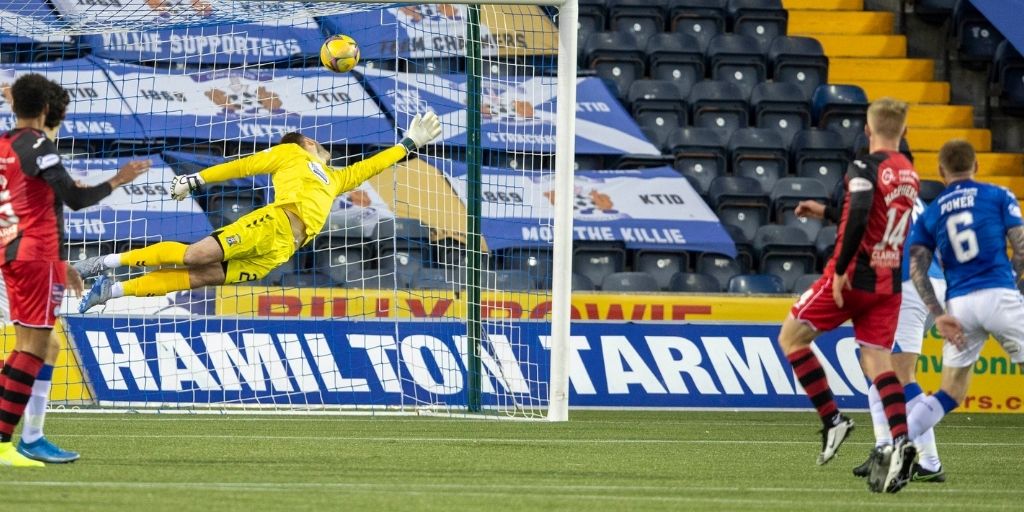 St Mirren picked up a share of the spoils in their final away match of 2020/21 after a pulsating 90 minutes at Kilmarnock.

The Buddies looked to be heading for defeat when a Kyle Lafferty brace had the home side in control. Goals from Jamie McGrath and Cammy MacPherson dragged back on to level terms only for Killie to take the lead again through Greg Kiltie with less than 10 minutes to go.

But Collin Quaner's first St Mirren goal earned Saints a point as our season get sets to draw to a close on Sunday.

Kilmarnock, fighting for their lives in the relegation battle, got off to the perfect start when they took the lead on eight minutes. The Saints defence was sleeping as Lafferty ran on to Chris Burke's low corner to slam beyond Jak Alnwick.

The Buddies should have found themselves level four minutes later when Conor McCarthy sent a brilliant cross in from the left. Jay Henderson only needed the faintest of touches to turn in but couldn't get anything on it as it drifted wide. And less than a minute after that Jon Obika spurned a glorious chance for a leveller as he headed Henderson's cross over from close range when he should have hit the target.

Kilmarnock could have doubled their lead with a little more than 10 minutes of the half remaining. Burke went on a driving run before breaking into the St Mirren box and forced a strong save from Alnwick. Mitch Pinnock was following up on the rebound which was well blocked by Marcus Fraser before Lafferty went down in the box and received a yellow for simulation.

The home side nearly made it two almost immediately after the restart when Daniel Finlayson was forced to head Lafferty's hooked effort off the line. Saints goalkeeper Alnwick fumed at the officials as he believed the ball had already crossed the byline.

Killie again could've have extended their advantage when Pinnock's pinpoint cross met the head of Burke who headed straight at Alnwick from six yards out.

Kilmarnock's pressure would tell as they did grab a second when Lafferty headed home Calum Waters' cross on 62 minutes.

But within a minute Saints would reduce the deficit with Jamie McGrath netting for the 17th time this season. The Irishman's first strike was blocked by Zeno Ibsen Rossi before he slammed in the follow-up.

Saints began to have the bulk of the possession with Killie pinned in their own half and the equaliser came with only 12 minutes to go. Jay Henderson rolled the ball into the path of MacPherson who took it first time and lasered into the top corner.

It was a terrific comeback for Saints but it wouldn't last as three minutes later Kilmarnock scored their own screamer to retake the lead. Kiltie ran on to McCarthy's header and ferociously volleyed into the back of the net as the home side looked to have secured the three points.

But just two minutes after, Quaner netted his first goal for the Buddies to draw Jim Goodwin's side level.

The drama didn't end there with Alnwick, captain in place of the absent Joe Shaughnessy, made a sensational block in injury time to deny Burke a winner and ensure the Saints would take a point back to Paisley.